Have you ever ridden down a road and thought, ‘This would make for an awesome bike race’?

Most cycling fans have, but few get the chance to turn their daydreams into reality.

Enter David Kemp, race director for the Bowral Classic: a gran fondo event based in the historic town 90 minutes south of Sydney.

Kemp, from Noosa in Queensland, was a professional cyclist in the early 2000s who mainly raced in the USA and Australia. He counts a National Championship silver medal and riding the Tour Down Under among his career highlights.

This year, Kemp applied his skills to a different kind of challenge. When the Bowral Classic added a criterium race to its schedule, Kemp was tasked with designing the course: a brand-new circuit on the streets of Bowral.

AusCycling sat down with Kemp, where he walked us through the process — and setbacks — of designing the race named ‘The Crit’, set to be held this December.

From the outset, Kemp insisted that The Crit take place in the middle of town. It would not be sidelined to an empty carpark or industrial zone on the outskirts.

“I’ve raced through the middle of Chicago, past the bars where people are drinking. The atmosphere that creates is amazing,” Kemp said.

“As a racer, riding those streets at twilight, you get instant atmosphere. You can’t buy that anywhere else. You’ve got to rent a crowd, which are the family members. You won’t get the public to drive out of town to watch it,” he said.

Kemp hopes the crowds will give weekend warriors an elevated experience compared to their usual races.

“A street-style crit, that’s something that not many racers get to experience without being pros,” he said. “I’ve done city stages of the Herald Sun Tour, racing around Lygon Street. That’s pretty special. They’re the memorable races.

“That’s going above and beyond what a club race can offer.”

David Kemp, race director of The Crit at the Bowral Classic. (Photo: supplied)

Kemp fired up his ex-pro’s brain to plot the Bowral crit course.

“How to construct the course is to put yourself in the racer’s perspective,” Kemp said.

“Like, if we start here, we’ll have a 500-metre start-finish straight, which is where I can move up. If I’m going up a hill, I want to be going into that corner in third or fourth place, because it’s narrow,” he said.

“You almost visualise riding around the course like that, putting yourself on the bike again. I’m thinking about positioning through the technical sections and imagining how the race would play out technically for a team.”

It’s about creating a varied, dynamic and tactically interesting course for the riders.

“We’re going for something other than a velodrome kind of feel,” Kemp said.

Getting On The Ground

Kemp used Google Maps to plot out a rough idea of his ideal circuit.

After creating a high-level concept, a site visit was essential for firming up the plan.

“You go and ride it, take the bike and do laps around Bowral,” Kemp said. “You think, ‘that will work’, or maybe ‘that won’t work’ because there’s a manhole cover in the apex of a corner. You need to get that level of detail for rider safety.

“Getting a good sprint finish area is important. Will it be super-fast and downhill? As well as seeing what the wind is doing by standing there over a number of days. That builds up your risk profile to mitigate your risks,” Kemp said.

After seeing Bowral’s streets, it was time to sketch up a plan for the local council’s approval. This is when your circuit of dreams can receive a rude wake-up call.

“Initially, we were going to be shutting down the main street. It would’ve been a bigger affair. Council didn’t like this,” Kemp said.

“I had a 1.2km circuit, then I stretched it out a bit further to 2km,” he said. “That was based on a number of things. Like on our site visit, we identified a high-risk section of potholes. We asked Council if there was any chance of fixing those. They said no.”

The longer the course, the more variety. But it also means the event affects more residents and businesses.

“I was going shorter, with the consideration of, number one, what are the impacts? If you’re going bigger, you have four kilometres of houses and businesses that need to be consulted. You need an access plan drawn up for it,” Kemp said.

“We were basically locking people in their homes for every race. If they wanted to get out, we needed to get them to call us, and we’d send an escort vehicle. The planning was going to be massive.”

Ultimately, Kemp and the Council settled on a 2km circuit starting and finishing at the north end of Bradman Oval, at the Bowral Classic event village. But, in true 2021 fashion, that wouldn’t be the end of the story. 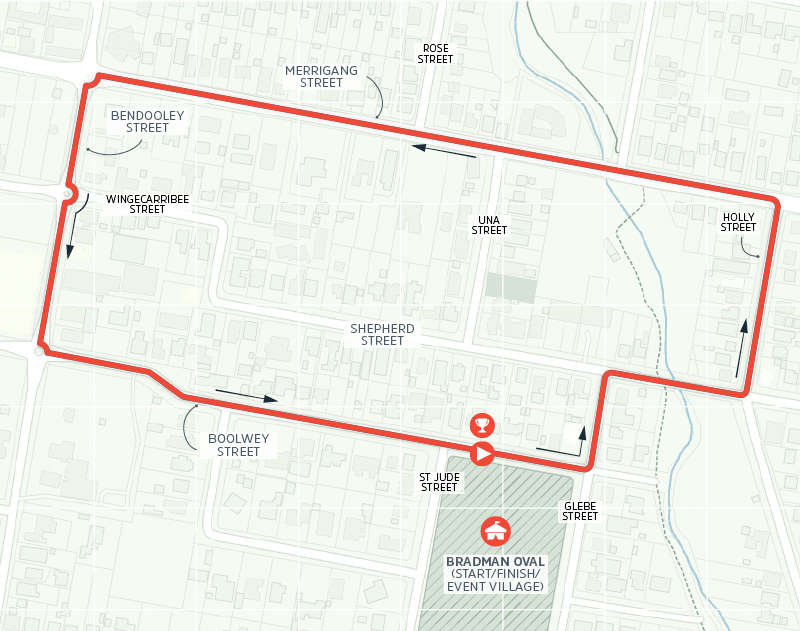 The original course for The Crit, with start and finish at Bradman Oval.

When COVID-19’s Delta variant plunged New South Wales into lockdown, the Bowral Classic moved from October to December. That created a new headache.

Now, the event would clash with the cricket season, meaning Bradman Oval couldn’t be used for the event village. Instead, all the stalls and displays would move two blocks south to a different park.

“Once the village moved to Loseby Park, I was almost forced to redesign the course,” Kemp said.

“That was going to be part of the appeal, racing past the village every lap, maximising that opportunity. There’d be beer tents, people visiting the vendors, part of the value-add proposition. That was the drawcard of it.”

With only a few weeks in which to plan, Kemp quickly drew up a new, simpler course.

“Based off the short timeframes that I had. I haven’t had a long time to get full approvals, I went as simple as I could, just around the park,” Kemp said.

The advantage of the new course – a simple rectangle around Loseby Park – was that no residents would be prevented from leaving their homes. The course could be set up on the park side of the street, leaving an access lane on the opposite side.

“It’s a sterile environment I could control, as opposed to going a block or two further, which adds inherent complications. You would have residents on both sides of the street, you’d have to manage that via escorts,” Kemp explained. 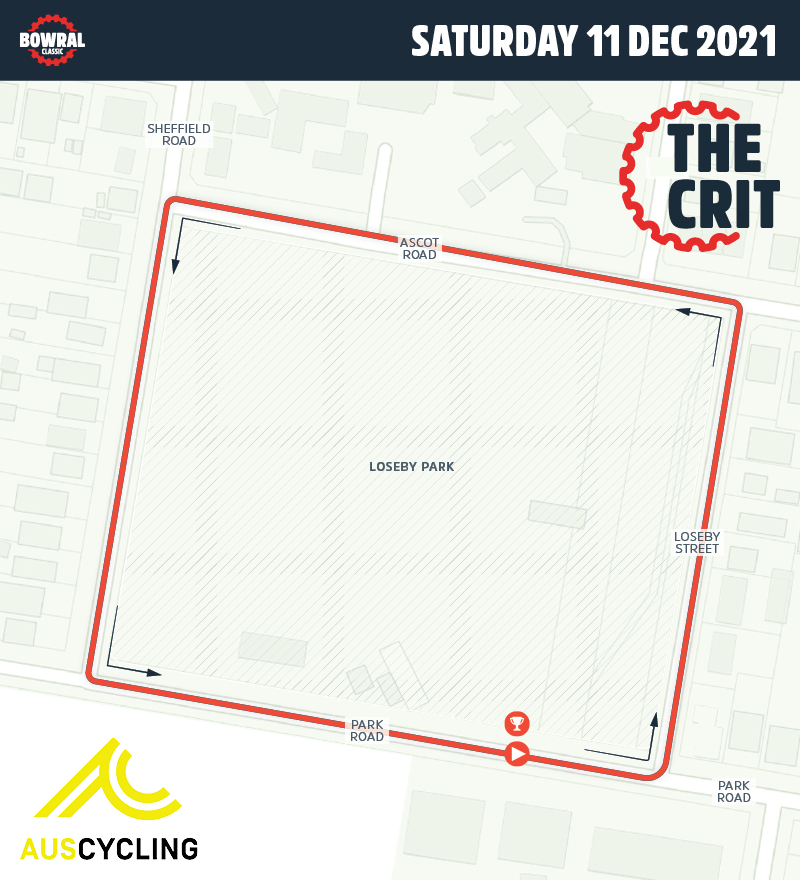 The new course for the criterium at the rescheduled 2021 Bowral Classic.

It’s not the course that Kemp dreamed of —that’ll have to wait for another year — but the director still expects this deceptively simple circuit to serve up tactical racing.

“It’s not a flat course. It has false flats and a descent on the finish straight. You’ll see riders attacking up the backside. It lends itself to a breakaway maybe lapping the field, given it’s only a 900-metre circuit,” Kemp said.

And, regardless of the course, Kemp promises the pro-like atmosphere he’s been chasing.

“What we’re trying to achieve is to give that next level of experience, so it’s not just riding around a block. It’s racing around a course that’s been designed and laid out like a pro race. That’s what it’s going to be,” Kemp said.

“If I was still racing, I’d want my team to bring me to the event.”

‘The Crit’ is part of the 2021 Bowral Classic and will take place on Saturday, 11 December 2021 at Loseby Park, Bowral. You can register here. 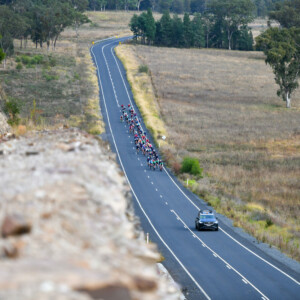 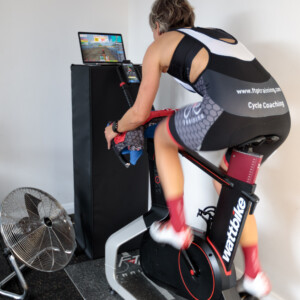