Search
Menu
Search
A lot of nonsense has been spoken and written over the past few months regarding the UCI’s ‘new’ bike regulations. As the regulations vary for Road, MTB and the various Track disciplines, I will restrict my comments and explanations to road bikes, which is what most of us ride and is the area from where most conjecture has emanated.
The truth is, the regulations aren’t new at all, it’s just that up until this year many of the finer points had been overlooked as commissaries have concentrated on other sporting aspects. However, continuing development, innovation and experimentation have forced the hand of the UCI Equipment unit to enforce regulations, which are in place primarily for reasons of rider safety.
Everyone is aware of the 6.8kg minimum weight limit, which is often quoted when manufacturers are advertising about their latest and lightest “barely legal” model. This weight limit has been recommended as a weight below which the bikes integrity and safety may be compromised. Sure, it’s not a formula guaranteed to provide safety as it is entirely possible to have a heavy 5kg frame to which 1.8kg of lightweight, flimsy, fragile rubbish is attached. So weight alone as an overall factor cannot guarantee safety. But I guess it is presumed and hoped that most manufacturers and bike builders will use a common sense approach and use a congruous build list so that the reliability of any component isn’t compromised when trying to get as close to the magic 6.8kg as their budget allows. You know what I mean? Don’t build the bike to 6.6kg and then put on a 200g papier-mache crank-set, or to 6.75kg and then fit a 500g bamboo handlebar and stem. Some common sense thoughts of the use the bike will get, the stresses applied and most importantly not minimum weight but maximum safety for the flesh and blood that is at jeopardy should anything fail. 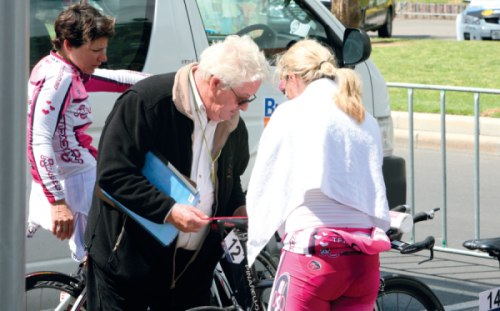 Rider safety and an even(ish) playing field are the benchmarks around which the UCI bike regulations were formed and this principle was also in mind with the regulations regarding rider position on the bike, as stability and control are deemed to be compromised with positions outside these parameters. The rider shall have three points of contact/support with the bike. The pedals, saddle and handlebars and the position of each is regulated and checked at every championship event and intermittently at others. The basic requirement is that the point of the saddle (which is mounted horizontally and is between 24 and 30cm in length) must be at least five centimetres behind a vertical line drawn from the centre of the BB axle. If a rider should “for morphological reasons”, (which means if they are very short or have short legs) requires a position forward of 5cm, in no case shall the tip of the saddle be forward of a line drawn vertically from the centre of the BB axle.
This ‘forward position’ of between minus five centimetres and zero can only be used if the rider complies with a further check where they are required to have their knee position checked while seated on the bike with the cranks in a horizontal position. In this position a vertical line drawn through the centre of the forward pedal axle may not pass behind the forward edge of the knee cap. In other words the knee cannot be in front of the pedal.
The handlebar shall be of classic shape, with the lower hand position above a horizontal line drawn across the top of the front wheel. Simple, but handlebars have been the topic of much conversation lately with the 3:1 ratio receiving a lot of attention. Let’s face it. There is probably nothing more dangerous than a handlebar breaking. And a width to depth ratio of three to one has been deemed as the safe maximum for ‘non round’ bars. It goes like this. Round bars are 1:1, i.e. they are 31.8mm when measured vertically and horizontally and are what most of us use. Some bars are ovalised or have a flat section on the tops, which are perhaps 1.25:1 or 1.5:1, so ‘normal’ road bikes don’t have an issue as they easily fall within the permitted range.
The issue is generally with aero bars on TT bikes many of which have become blade like, with dimensions up to 9:1 (that I have seen). Checking legality is a simple task. Measure the depth then multiply this figure by three. If this sum is less than the measured bar width they don’t comply. And logically if the calculated sum is greater than the bar width they are legal. I guess in time manufacturers will only make compliant product, but at the moment there is a lot of ‘illegal’ bars available, so I guess the message is ‘buyer beware’. The other regulation to gain notoriety recently is 1.3.018 which is the requirement for “non conventional” wheels to undergo testing and to be certified before they are permitted to be used in road races. This regulation has been in place for years and the list of compliant wheels now fills five pages.
The reason for the recent controversy was the decision by Cycling Australia to recognise and enforce the regulation which caused some distress to local distributors of unlisted wheels and to those riders who had purchased them. The position taken by Cycling Australia is, “Should a competitor use a wheel which is in breach of this regulation and that wheel is found to have caused injury to any person or damage to property, the competitor using these wheels may be liable for all costs arising from the incident”. So that’s about it. Most riders will have nothing to worry about, but as I always advise, if you have any doubts at all, take the pressure off yourself by checking that your bike is legal before you start pinning on a number come race day. If you would prefer the precise wording of all these regulations rather than my brief summary, have a look at www.uci.ch. Click on Rules, then 1/ Part 1. General organisation of cycling as a sport. Then check out from article 1.3.001 on page 55 through to article 1.3.025 on page 68.2/ Non standard wheels in conformity with articles 1.3.018.3/ Technical regulations for bicycles, a guide to their implementation.