Bicycling Australia has been chatting with National Road Series athletes to get some tips on how we can all ride better and smarter. Under 19 rider Bradley Heffernan is set to enter the NRS this year as part of the unique – and very young – new NSWIS team…

BA: So, Bradley, you’ve stopped in at Velodrome Illawarra in Wollongong’s northern suburbs for our chat, at the end of a training ride?

BH: Yeah, I do a lot of my riding alone and I live nearby, so it’s all good.

BA: I see your Dad (Kieran) is here today coaching the juniors…and of course, this is where it all began for you.

BH: Yeah, I started riding here when I was about 11. My dad used to ride and I found an old track bike under the house, rode it down here, and really liked it. Dad and I fixed it up and I gave it a go. It wasn’t until I started to actually race that I developed a real passion for it but that didn’t take too long.

BA: How old are you now?

BA: And since we are chatting in Wollongong, I would guess you belong to the local club?

BH: I joined Illawarra Cycle Club in 2006 when I started riding on the track. My sisters Holly, Chloe and Shari are all members too. And Dad, although he doesn’t ride much these days. He used to race at the State level, quit and then came back for a while, but as we got more serious, there was less time for him. I went down to the club training for about a month then started the Friday night racing. Not long after that Dad bought me an old bike on eBay and we set it up for road and I started racing there too. A raced at club level for a year or so then did the State opens …Goulburn was the first. I went okay; I don’t think I smashed it. I usually finished midfield until I was in under 15s and then started to develop after that.

BA: So you weren’t driven by winning?

BH: No, winning never bothered me. I just liked racing. It was three to four years before I won a decent race.

BA: And then you met someone who you say has been a huge influence on your career?

BH: Yeah, I had met Mick Kejda who was the Illawarra Academy of Sport coach when I was a first year under 13 and then he took a bit of an interest in me and then took me under his wing. I got into the IAS on a scholarship and then he became the NSW Institute of Sport (NSWIS) coach and I stepped into NSWIS in 2011 on a scholarship program. That gave me access to coaching, testing, funding and training at Dunc Gray Velodrome in Sydney. We would do track for half the year and road for the other half.

BH: I think I am more of a sprinter. As well as being on the team, I have some individual under 19s commitments on the track – like Junior Worlds – and the next step after that on the track is elite, there is no under 23 on the track, which will be a longer plan. It’s important that I keep involved. Whereas on the road I can ride under 23. Brad McGee and Ben Kersten at NSWIS have for the first time developed a team for the National Road Series, all young guys like me, to give us the chance to ride at fairly high level on the road.

BA:  So, you haven’t actually had a National Road Series race yet?

BH: (Laughs) No, I am still pretty young. But this new team is giving me the chance to have a go and I am really excited. It’s like a development squad. We’re very young so we are not putting pressure on ourselves. It’s all about getting experience in a team and getting used to the environment of the NRS. The NRS is a good place to learn and from there we might be able to get pro team contracts, for example with Trek who are one of our sponsors, or other big teams. It’s really good to not have to be looking for teams after I finish under 19 and be in a team that will support me.

BA: When and where will be the team’s debut?

BH:  Bathurst (B2B and criterium) will be the first ride. We had a team camp last week at Fitzroy Falls at Brad’s place. There are seven of us. I think we will be riding a fair few of the NRS races.

BA: Now you are on a team, do you still have a personal coach?

BH: I have the NSWIS guys, Brad and Ben, but also am still in touch with Mick.

BA: Do you think it is important for a bike rider to have a coach, even juniors and masters?

BH: Yes, I think it is important. It’s a two way street. My coaches have influenced me and I was very fortunate to have had one of the best junior coaches in Australia.

BA: Apart from Mick Kejda and your current coaches, who are you influenced by?

BH: My family, who have supported me so much. It’s not easy managing cycling and school and this year I was away for Christmas which was a big change for me. I also admire Robbie McEwan because I see a lot of myself in him. I want to be a sprinter…

BA: What does a typical day of training look like for you?

BH: Brad writes my training programs and I have a diary which lets him know how I am going. I am lucky to have Mick Kejda here who does motor pacing with me on the track, so I have the best of both worlds. I train six days a week, usually two strength days, a day on the watt bike, a couple of big kilometre days, two days of gym . . . I usually do 600kim a week, a lot of which I do by myself.

BA: How do you stay motivated?

BH: Just thinking of my goal, the plan. We set goals at the start of the season and I just set about achieving them.

BH: Up Macquarie Pass, through Kangaroo Valley, over Berry Mountain, through Kiama and home. That’s a 70km loop.

BA: Going out training alone so much, have the recent spate of accidents involving riders and cars rattled you?

BH: It is a bit of a worry. I get abused all the time by drivers. I think the best thing a cyclist can do is to do the right thing as much as possible. Wear lights; don’t do anything against the rules. People who do the wrong thing give the rest of us bad names.

BA: What are some of your best results to date?

BA: How do you cope with disappointment? For example, the national track championships this year weren’t so great for you.

BH: I just get away for a couple of weeks, re-think, re-plan, secure my goal, lay it all out, then think, there’s always next time.

BA: Why bike and components do you ride? Your choice or the team’s?

BH: Trek Madore 7 Series with Ultegra D12, which is electric. That’s the team bike. My own is a Cervelo with electric gearing and it’s awesome, particularly for racing.

BA: Have you ever crashed?

BH: I have been lucky so far. I crashed at the national track championships this year in the madison and we were leading, which wasn’t very good, but I was pretty lucky.

BH: Brad and Ben are really into encouraging us to have a backup plan for a career in case cycling doesn’t work out or when it finishes. A cycling career is a maximum 10 years of so. So my plan is to finish school and go to uni and study primary education.

BA:  Who would be on your dinner guest list?

BH: Alanna Bennett, the surfer and model. Cav.  Bradley Wiggins. Can I get back to you on the others? That’s a hard question! (Later that night, he comes back to us via email and adds Torah Bright, Carl Baron and Bruce Springsteen to the dinner list). 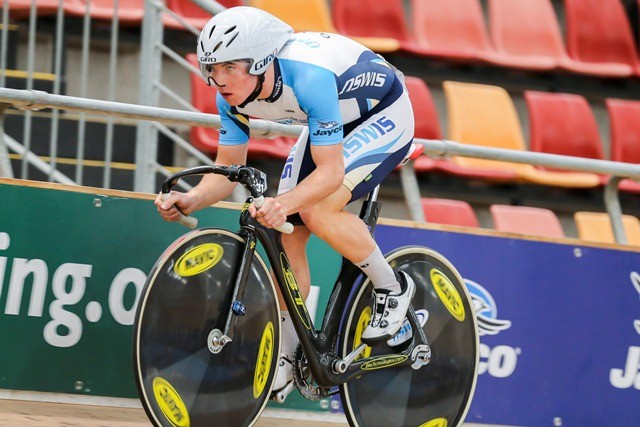