You don’t have to race to enjoy cycling. Many of our readers have never raced on the road, but if you’re thinking about having a try, Bob McAuliffe has some tips to help you.

A Campagnolo advertisement says, ‘To finish first, first you must finish’ to finish a race, you need to have done pre-race preparation: training, diet, rest, equipment check, consultation with coach or team mates. These are all topics for other articles. But you also need a race plan which will not only ensure that you finish, but that you are positioned and prepared for the decisive parts of the race. Ironically, for a sport that is so hard, racing is all about conserving energy. Generally, your plan will be to conserve energy for the decisive events of the race which will include responding to attacks, initiating attacks and the final sprint. Your plan for each race will take in to account: 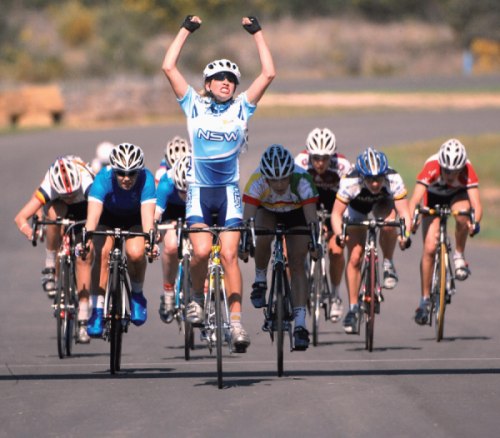 • Your own fitness and form
• Experience in races over similar distances and terrain
• Knowledge of your competitors’ strengths and limitations
• What you are trying to achieve. For example, if you’re a total beginner, just to finish might be a good first goal.
Settling In
Arrive at the start in time to prepare your equipment, register, have an effective warm up and take a starting position near the front. When the race begins, make a conscious effort to relax your arms and breathe easily, using small gears which will allow smooth pedalling. If surges occur, change up to bigger gears as necessary but return to the easier gears as soon as you can. This will save your legs for later.
In the early stages of the race, you will often experience aimless attacks and doomed breakaway attempts. At any level, you can never be sure which breaks to chase. What is certain is that you cannot chase every move. If you take a position in say, the first one a long grinding chase, particularly if there is a shortage of willing workers.
Position
To an outside observer, the peloton (main group of riders) may appear a solid, colourful mass. To those who are part of it, it is a living thing. It surges and stalls, stretches and compresses and allows some to escape briefly before recapturing them, while shedding the unfit and unprepared! There is constant movement within its ranks as some riders strive to secure more favourable positions and others default to its ‘back door’. You need to monitor your position constantly to ensure you are far enough back to obtain shelter but close enough to the front to avoid mishaps and to remain prepared for the decisive moves. While the odds favour positioning in the first one third of the bunch, we can refine this even further according to the conditions. In lower grades or with riders of unknown skill it’s wise to stay closer to the front. If the road is narrow, wet or badly surfaced it is also safer nearer to the front. On out and back courses, the field can break up at the U turn, so you need to be at the front beforehand.
Wind
Sheltering from the wind is arguably the most important single factor in conserving energy. You make peaks of effort on climbs and in responding to changes of pace, but wind is a constant factor. Even on a perfectly still day, a rider will experience resistance in moving through the air—there is always wind on the road. You must know the wind direction and ensure that you adjust your position in the bunch to remain sheltered. Train yourself so that you instinctively assess the wind conditions.
Some indicators of wind direction are:
• Smoke blowing
• Flags waving
• Washing on clothes lines
• Leaf and litter movement
• Where experienced riders are positioning themselves in the bunch 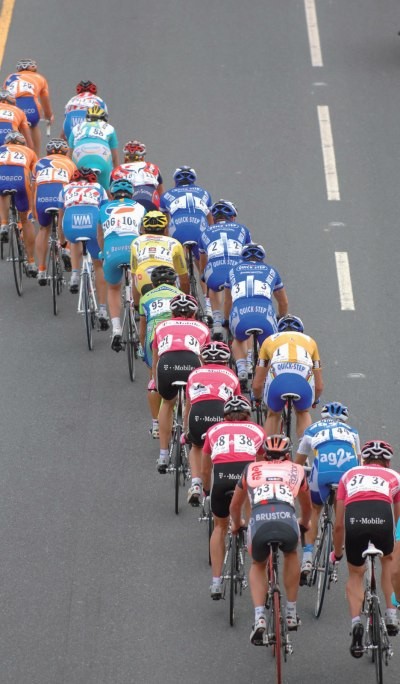 Climbing
You cannot avoid the climbs, but you have some control over your energy output. You can save precious energy by drifting back through the field over the length of the climb. This proven technique is to start the climb at the front of the bunch then drift back so that you reach the rear near the top. A quick check of your heart rate monitor will confirm the benefits. You then need to move through to the front of the bunch and repeat the procedure on the next climb. This tactic is most effective in the early stages but, as the race progresses, it may be wise not to drift too far back, particularly if an attack appears likely.
Working Turns
There is an established protocol about sharing the work, ‘taking turns’, in a bunch. Many beginners have been turned off road racing when the local club hot-head starts swearing at them for naively breaching these ‘rules’. Protocol dictates that riders who are part of a group with a common objective share the work involved in achieving that objective. The group might be a breakaway trying to stay away or riders trying to catch a breakaway. In both of these examples individuals in the group all have something to gain by working for the group. Even in these groups, you are not obliged to work if:
• Attempt to take the wheel of one of the strongest, smoothest (and hopefully biggest!) riders. If he accelerates as he takes his turn, you will be ‘dragged through’ with him. This is far better than having a strong rider accelerate past as you finish your turn.
• Keep your turns short. If you follow the strong rider through, his momentum will almost cover your short turn. If you observe breakaway groups working seriously in professional races, you will see that the leading rider is already being overtaken as soon as he moves to the front. The result is a very efficient, rhythmic operation.
• Short turns are more efficient, but some riders insist on doing long ones—good luck to them! Take advantage of their effort but don’t copy them.
• Don’t accelerate through to take a turn. The purpose of a pace line is to share the effort required to maintain a constant speed. The rider on the front dictates the length of his turn, and the recognised signal to come through is a flick of the elbow on the sheltered side where he is expecting you to pass. The signal will not usually be necessary with short rolling turns.
• Don’t work harder than others in the group. It is important that you earn respect by doing your share, but this does not mean being a work horse.
The Final Phase
So far, you have been concerned with settling in to the pattern and rhythm of the race and conserving your strength for the decisive events from which the real contenders will emerge. The next phase involves using your precious energy resources to ensure you end up in a position where you can win the race. Your journey to the podium will require a demonstration of the strengths in which you are confident, but also a measure of patience. In racing, patience does not mean waiting for something to happen and hoping you’re part of it. It means working through your plan and mentally ticking off each successfully completed phase. Patience is self control; it is action ready to happen. Responding to Attacks As any race develops, serious attacks become more likely. If you can recognise the signs, you are in a better position to respond. Look for riders who have been content to roll along in the bunch, but who are now becoming more visible. They may be moving closer to the front or forming a train with club mates at the back—three or four, even two, of the same colour jerseys together is a danger signal! Other signs include riders systematically checking the positions of others in the bunch, and discreetly changing up a gear or two.
Initiating Attacks
Your objective in launching an attack is usually to place yourself in a position where you reduce the numbers of your rivals or weaken them in preparation for later attacks. There is no point attacking unless you know exactly what you are trying to achieve, and this could include:

• A lone breakaway. This should not be undertaken lightly.

You do see examples of riders outclassing the field and succeeding but,

generally, the odds are not good.

• To reduce the serious contenders to a manageable number.

If an attack is to succeed, you must open up a gap immediately.

Here are some of the best moments to try:

• Near the top of a climb, using the descent to increase the gap.

• First in to a sharp corner, accelerating out.

• In to a headwind where you know it is about to change.

For example, the road changes direction and you quickly have the benefit of a tail wind –

to increase your lead.

• As the bunch regroups after an attack. Having successfully nullified an attack,

the bunch tends to relax and this is your chance for a classic counter attack.

• First out of the turn on an out and back course.

• On a smooth, flat road with ideal conditions. Sometimes this will succeed simply because it is so unexpected! Some attacks are premeditated and planned in detail but, on many occasions, alliances will be formed on the road. If you are feeling strong and keen to attack, it makes sense to take some helpers with you. With the better riders always on the alert, it is not difficult to communicate your intentions to the right people. If you are keen, and have nothing organised, another option is to make a lone move off the front at about 80% effort and see who wants to play.   The Finish The vast majority of races finish in a sprint. It may involve the entire bunch, down to just two break away riders. Next issue we will look at how to improve your chances in a sprint. 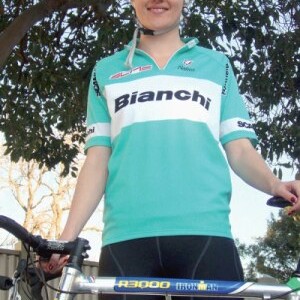