Mitchelton Scott and Daryl Impey are enjoying major celebrations after the South African won Stage 9 of the Tour de France.

Impey, a former Tour Down Under winner and current South African road champion, outsprinted Belgium’s Tiesj Benoot in Brioude on Bastille Day. Frenchman Julian Alaphilippe retained the yellow jersey to a chorus of cheers from his home country fans after the stage finish.

172 riders took the start of stage 9 in Saint-Etienne with Polka dot jersey holder Tim Wellens (Lotto-Soudal) was first to attack after flag off but Nils Politt (Katusha-Alpecin) was first to make a gap.

Alessandro De Marchi (CCC) was forced to abandon after a heavy crash at km 10.

Pöstlberger at the front with 42km to go

The deficit of the peloton was 8’50’’ at Mur d’Aurec. A time gap of 10’49’’ was recorded at km 47, after which Deceuninck-Quick Step maintained it just above ten minutes. Boasson Hagen won the intermediate sprint at Arlanc (km 92). Clarke was first to attack from the front group with 62km to go.

Pöstleberger found himself alone in the lead 42km before the end while the peloton let the gap increasing (13’ with 30km to go, 14’ with 20km to go). The Austrian was caught in the last categorized climb of the day with 15km to go. Roche and Benoot attacked from the leading group reduced to seven riders. Impey came across and passed first at côte de St-Just with 13km remaining.

Benoot and Impey rode to victory 7km before the end while Romain Bardet (AG2R-La Mondiale), Richie Porte (Trek-Segafredo) and Steven Kruijswijk (Jumbo-Visma) attacked in the côte de St-Just but Team Ineos was prompt to bring them back. Benoot and Impey shared the turns to avoid the return of their former breakaway companions.

Benoot took the initiative of launching the sprint but Impey proved to be the fastest. He’s the first rider to win a Tour de France stage with the South Africa national champion jersey. The last victory of his Mitchelton-Scott team was with Michael Matthews in 2016. 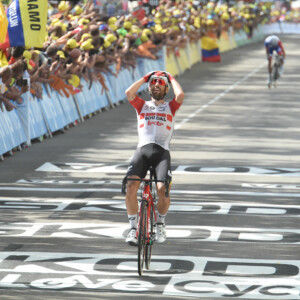