Gusty conditions made for exciting racing in Ballarat at the MARS Cycling Australia Road National Championships during the Twilight Criterium races.

The Under 23 category set off at 4:30pm, with a number of break-away moves made from the gun, Ryan Thomas (NSW) was out front for both intermediate sprints and walked away with the sprinters jersey as a result.

After a tough year in and out of form with the BMC Development Team Kerrison was elated to accept the Criterium Champion’s award. “It is a monkey off my back, last year was a bit rough for a multitude of reasons, which you get first year in Europe, but you get that.

“But now I am moving forward now with State of Matter/MAAP Racing.”

In the Elite Womens race Sophie Mackay (NSW) who races domestically with Specialized Racing took the title after she was part of a break-away that managed to hold their form until the end. Lizzie Williams (VIC) and previous champion Lauren Kitchen (NSW) rounded out the top three.

Before the Elite Mens Criterium started it was well known that Caleb Ewan (NSW) of Orica-GreenEdge was on form and the favorite of the day.

Trying to rattle their counterparts, the Drapac Professional Racing team and the Avanti IsoWhey Sports Cycling Team launched a number of attacks that held the peleton away for up to 10 seconds at multiple stages during the hour long race. Samuel Spokes (NSW) and Robbie Hucker (VIC) were off the front trying to steal the show.

When the pace picked up Ewan said his team were able to stay calm and reel in the break to put him in a good position for the finishing straight.

“I can’t fault the team at all, they rode perfectly and again they just gave me such an easy ride out there and that’s what makes the difference in the end.”

Ewan was again abe to out-sprint his opponents to the line where he raised his hands almost looking like it was too easy. Following Ewan closely was Brenton Jones (VIC) and 2012 criterium winner Anthony Giacoppo (WA).

The Individual Time Trial will take place on Thursday and the main event on Super Sunday is the Road Race. 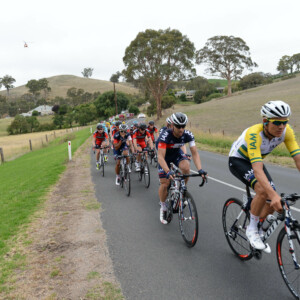