Search
Menu
Search
Sometimes, you can simply be lucky. I’d emailed Matt White to ask him a few questions. Since he retired from professional road racing, Matt has been a director of the Garmin Chipotle team, formally known as Slipstream. Matt lives in Gerona, so we were talking about Spain when he casually mentioned that some of the Slipstream riders would be in a training camp in the Pyrenees and would I like to visit? Would I? Do you have to ask?! “Well, it would probably be OK he said. “You’ll have to go through the head office first, but I’ll tell them to expect you. The camp is in La Molina” I contacted the press agent for Slipstream and they said it was fine to go. However, they neglected to tell me which hotel the team were staying at. Never mind, I’ll just wing it. I looked at the map of Spain and finally found La Molina. It is a little town in the Pyrenees just south of Andorra. On the map it’s shown as a little circle with even smaller type, so I thought I had a fair chance of finding the team. Well. Ski resorts are a lot bigger than they are in Oz. This place was about five times the size of Thredbo and was split into two separate sections. La Molina and Super Molina at the top of the hill. So my idea of just driving around and hoping I saw the team bus went up in a puff of smoke.
I needed petrol so I went back down the mountain to fill up. On my way back I saw a rider heading into town. It’s funny how you can tell from a distance whether someone is a good rider or not. As I got closer I thought “You know, that looks like David Millar.” I pulled alongside and wound down the window. “Excuse me mate!” I said. “Are you David?” A fruity British voice answered, “Yep.” “My name’s Simon. Matt White said I could come and visit. OK if I follow you in?” “Sure no problems. The hotel is right at the top. I’ll see you there.” I drove on, keeping an eye out for somewhere I could buy a lottery ticket as my luck seemed to be in. David had obviously had a bit of time to think on the way up the hill because when I got out of the car he said “So you’re a friend of Matt’s?” “Well, not a friend exactly. We’ve talked a few times but he said I could come here and talk to Allen, the team’s physiologist.” “Really? Well, I’ll ring Matt and find out just what’s going on.”
By this time we’d gotten into the serviced apartments where Ryder Hesjedal and Danny Pate were relaxing. Also in the room were Dr Allen Lim the physiologist and Sandra the team soignuer. Christian Vande Velde had gone home that morning unfortunately. David Millar came back in. “Well I’ve spoken to Matt and he says he knew you were coming and so does Marya at head office. So I guess it’s OK. But let’s get one thing straight. I’m not doing any interviews tonight. OK?” “Ummm….well David, I wasn’t actually intending to interview you. I want go get an overall view of what you do on a team camp and also to talk to Allen. I don’t need any interviews.” 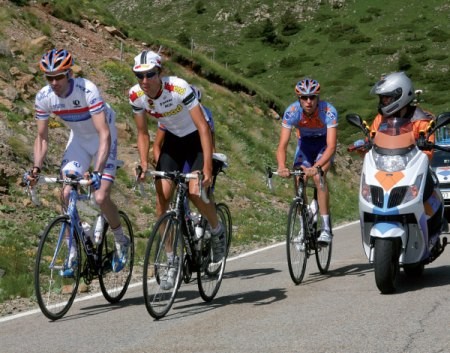 Saying that seemed to relax Millar. I guess being such a high profile rider you get all sorts of people expecting that you’re public property and wanting you to spill your guts out for their magazine. It’s probably even worse when you’re just a couple of weeks away from the Tour. Once I’d assured him I didn’t want to interview him, he became much friendlier and I made a mental note to be as unobtrusive as possible. Allen came over and extended his hand. “Nice to meet you Simon. How did you find us?” I told him the story and he was amazed. “You must be the luckiest person around. I can’t believe you did that. Today was a rest day. All the riders rode in the morning and then relaxed in the afternoon. It’s only that David wanted to do a bit extra that he was on the bike at all,” he beamed. Allen Lim is one of the friendliest people you could hope to meet. He is all smiles nothing was too much trouble. He invited me to stay to dinner. He said if I didn’t have a hotel I was welcome to the spare bed in their apartments. But apart from this, he was very professional. 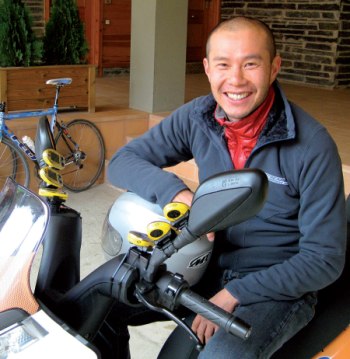 “Simon, before we do anything, you need to wash your hands. And there’s a few rules. You don’t touch the riders, you don’t breathe on them and you don’t cough on them. Bronchial infection is the third biggest evil in cycling behind greed and drugs.” So I washed my hands and he got out his laptop. “What we’re doing here is we’re trying to give our guys the best chance they have of surviving the Tour de France. Their days are pretty simple really. They get up in the morning, have breakfast and then ride. Some of the days are hard and others aren’t. They practice eating on the bike, ride some more and come back to the apartment. They get a massage, stretch, eat dinner then sleep. We’ve tried to make it exactly the same as on the Tour, except for the transfers.”“So Allen, what sort of things do the guys eat?” “Aha! Well, I was hoping you’d ask that. We have our ‘secret recipe’ rice cakes, which we make for the guys. We’ve moved away from pasta as our primary source of carbohydrate because at times, the guys can have a slightly inflammatory response from the wheat gluten.
This can cause breaks in the digestion pattern, which isn’t good if you’re trying to replenish fuel stores. But we’re also experimenting with something called ‘glycogen recycling’ (See facts box). These guys are really good at recycling this and the high glycaemic index of the rice aids this. But you know, the science is nothing unless we can get the guys to eat it. That’s where my rice cakes come in. These have become a delicacy in the pro peloton. They contain bacon and parmesan cheese which gives them a bit of relief from all the sweet, sugary things they’re given.” Allen has the job of monitoring the training the riders do. This is available to the coaches and directors if necessary. When they’re training each rider is hooked up to record speed, heart rate, cadence etc. During motor pacing as a group, Allen has each rider’s details literally at his fingertips because each rider has a monitor on the motorbike’s handlebars. He can then give instant feedback from the motorbike to the rider concerned. The laptop picture shows the day’s riding by Ryder Hejedal. There is a video to show form, a map of the stage for route comparison, a profile of the stage with markers showing height, speed, average speed, cadence and gradient. 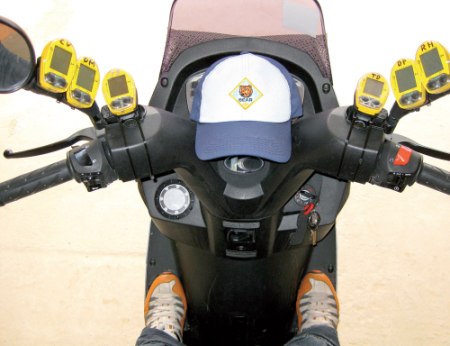 The spread sheet shows data for the team including their program, what they have been consuming etc. I wondered whether Allen had included their dinner at a local restaurant where they had been served up horse meat steaks. A Spanish delicacy apparently. The next day the team were scheduled to ride from La Molina to the city of Gerona on the Mediterranean coast. Matt White had driven up that morning and he was keen to know the news about the Cronulla Sharks. You can take the boy out of The Shire, but you can’t take The Shire out of the boy. The Garmin Chipotle guys had been joined by Michael Barry, ex U.S. Postal rider now with Team High Road, soon to be Columbia.

Michael and I chatted as we had recently ridden together in Mallorca. David Millar was itching to get on the bike and the others were relaxing. All in the day’s work I guess. Finally the bags were packed and we headed off. The riders first, with Allen in front, followed by Matt in the team car and me in my hire car. Matt had given me carte blanche to drive in front of the guys for pictures, but in all honesty it wasn’t that easy. For starters, the roads were one lane only and these guys ride fast! I was getting a small taste of what it must be like to be a team director. Drive as fast as you can, one hand on the wheel, one hand on the gear stick, map on my knee and one wrong move sending me over a cliff. It was fantastically exciting!

Eventually we rolled into the town of Ripoll where I said goodbye. I felt very privileged to have spent time with these guys. When you think about it, having some journalist from the other side of the world turn up on your doorstep when you’re training for the Tour could be a little disconcerting. Some teams would just tell you to get lost. But the Garmin Chipotle guys showed me true hospitality, especially Allen Lim. It was a privilege to Ride in the Slipstream.