Imagine you’ve reached the lowest point in your life. Imagine since the day you were born you’ve been hounded. By your parents, at school and by your peers. You had problems but there was no one who wanted to listen. No one who cared. You got into a bad crowd or you became so dependant on drugs and alcohol that you couldn’t see a way out. If someone said you could break that cycle by riding a bike 700km along the Great Ocean Road even though you’d never ridden a bike before, would you do it? Well these guys are sure going to give it a go. 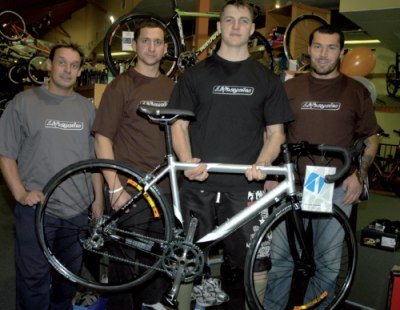 Randall, Tyronne, Christian and Colin are four blokes from different areas who share an eerily similar story. Some of them came from an unsettled background, others got addicted to drugs or alcohol. But for each of them, there came a point where the only direction was up. Not so many years ago these guys would have spent most of their lives in and out of gaol. Offending and re-offending. But magistrates nowadays would much rather give someone that chance of rehabilitation than just lock them up This is where Teen Challenge, otherwise known as ONE80TC, comes in. ONE80TC is a non profit organisation which aims to get young people’s lives back on track. This is done through a live-in, cold turkey styleapproach. The attendees are called ‘students’ and are offered respect while being taught life skills.

Each student goes through a step by step graduation program which includes quitting smoking, learning life proficiency and studying work or trade skills. While TC is a Christian organisation, it is not mandatory for the students to become Christians.

Rhett Morris the organiser of the Tour de Freedom explains. “Well, TC is a Christian based program. But students don’t have to become a Christian. We call our chapel the locker room, because that’s what it’s like in there. It doesn’t have a religious feel at all. We try to keep it contemporary. It’s not a matter of trying to indoctrinate them, but we teach them self respect, how to stop smoking, how to stop drinking, keep healthy and how to learn good principles along the way.” The bike ride is one of the things which set the program apart from similar organisations. For the last seven years, the Tour de Freedom has taken place in many areas of Australia and this year it heads to the Great Ocean Road. The ideas behind the ride are simple. Training for the ride provides a focus for the students involved. If they complete the ride, the very act of training for so long and achieving the goal is something many of these guys have never experienced. It gives them self confidence and self worth.
From the point of view of the other ride attendees who have paid to go along, it breaks down barriers and pre conceived ideas regarding disadvantaged youth. Many people who have been on the ride and suffered with the students have kept in contact with them afterwards. Rhett says, “You can’t measure what it does for these guys’ lives. I was talking last night to two of the previous riders and they said that the ride was the main thing which kept them in the program during the tough times. One of them is now managing a bike store in Western Sydney. He has a wife, kids and got his life back on track. We can always talk about the success stories with the boys, but the thing that always amazes me is the businessmen and the managing directors who keep in touch with them. Some of the guys even work for them now. 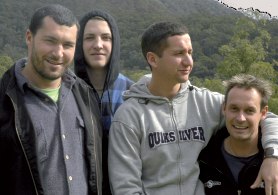 Day one can be very, shall we say, ‘interesting’. There’s a definite line between the TC guys and the other riders. But by the end of the week, the one thing we always hear is “Thank you for the opportunity for me to lose my prejudices. You see, we make no bones about it. We try to have the best hotels, the best food, the best mechanics, but it’s still a tough ride. We pick the course specifically with that in mind. Because we want people to come on the ride and suffer. In 2007, the last day was 258km and when people suffer like that together, it creates a bond. You can’t go through something like that with other people and not get something out of it.
These guys got up in the morning, they battled all day and suffered with four other people they’d never met before and now they’re friends for life. So many of them have said that as they were riding with the guys from ONE80TC, it suddenly hit them that hey, just for chance of fate, that could  be my son there.” The bikes were supplied by Gemini Bicycles. Setup and clothing was supplied by Lifecycles, Penrith. Bicycling Australia was on hand when the NSW guys were given their bikes. While they were nervous to start with, they soon got into the swing of it, although the use of bike shoes provided plenty of laughs. Speaking to the guys I was struck with the determination each one had to finish the ride. There was a glint in their eyes as if they knew that this was their chance and they were determined to take it.