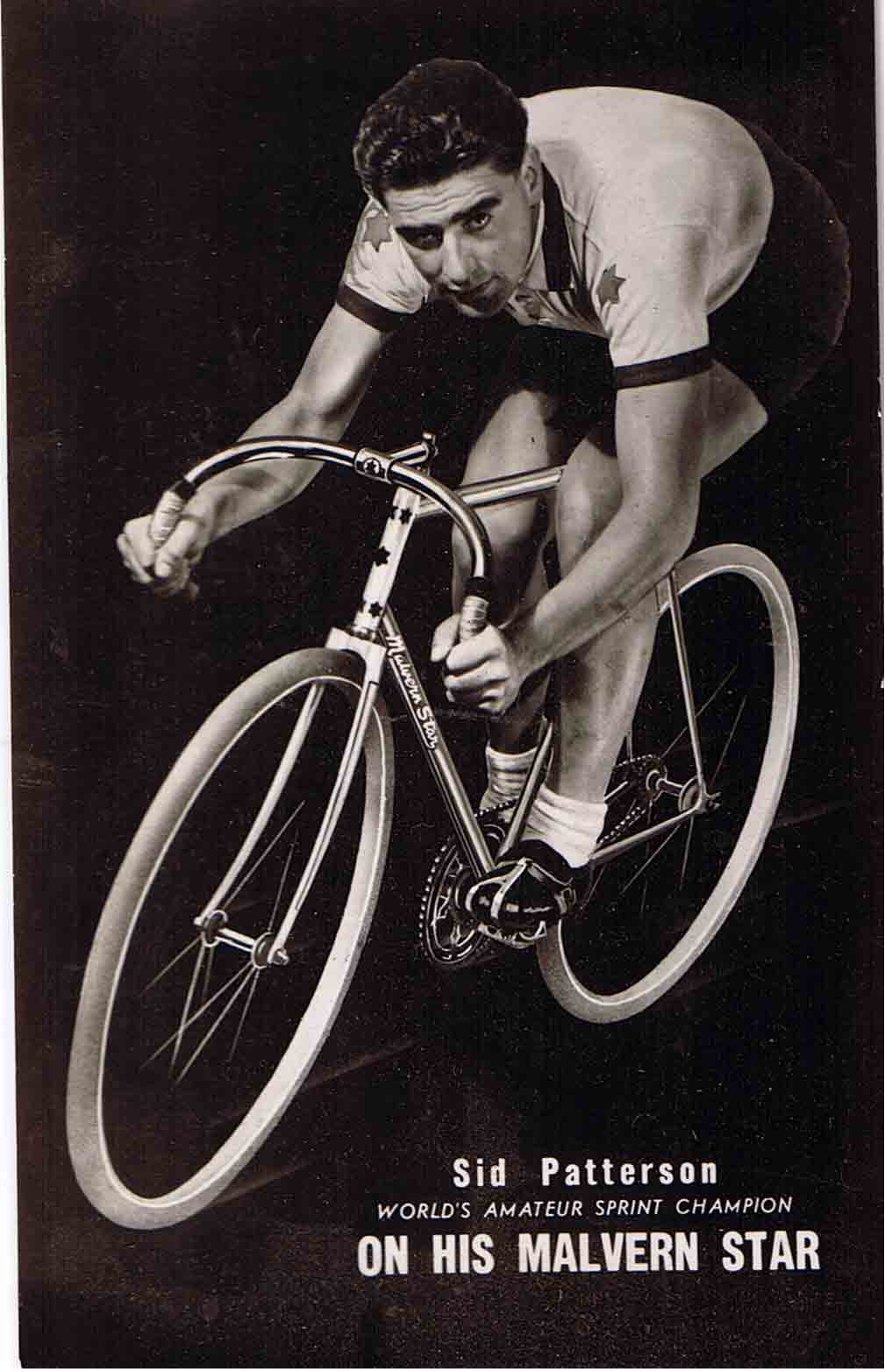 In pondering the feats of Sid ‘Patto’ Patterson (1927-1999) it’s important to remember the bulk of his amateur riding career took place alongside another giant of the sport – fellow Victorian Russell Mockridge. Indeed, until Mockridge’s tragic death in 1958, the two crossed paths on tracks all over the world in what was a Golden post-war era for Australian cycling. Like Ian Thorpe’s impact on Grant Hackett in the 200m and 400m freestyle, or Warne’s influence over McGill’s test match career, the two spurred each other on, no doubt. But the former’s presence also cost the other success; success which may have inspired an even greater legacy for Patterson in the annals of Australian sport.

Whereas the bespectacled Mockridge built his reputation as an all-round rider who competed at the highest levels on both road and track, the larrikin Patterson was primarily focused on the track (although it should be pointed out he did finish 2nd in the National Road Race in 1959), initially as a pursuiter before maturing into one of the most devastating Australian sprinters and Six-Day riders of the 20th Century. Amongst countless laurels that came his way in nearly three decades on the bike, it was on the boards where Patterson would claim four World Championships – two as an amateur and then two more as professional – during a glittering career which began at the age of just 13, when he was reportedly coaxed into his first ever race by friends who also happened to be scratch markers. He rode his final competitive race in 1968, aged 41.

Even as a raw teenager Patterson’s potential was clear for all to see. The Melbourne-based rider powered his burly 5’11” frame to wins in virtually every Victorian and Australian title between 1,000 metres and ten miles before his twentieth birthday. It was only a matter of time before higher honours called and in 1948 the still-maturing rider was duly selected for the Olympic Games in London, closely followed by the World Championships in Amsterdam.

Patterson failed to medal in either event, but before returning home he travelled back to England and partnered with Mockridge in several Madison races where fortune shone far more favourably. Before packed houses Patterson’s dominant sprinting propelled the Australians to victory in several races and won him many admirers, not least ‘The Pedal Club’, a members-only amalgam of British cycling journalists and officials of the time who gushed of: “…an amateur career as spectacular as anything that has ever been known in the history of the sport.”

Following his return to Australia, Patterson soon began an extraordinary run of success that culminated in him being crowned 1949 Australasian Athlete of the Year. He started the year famously winning every Australian track championship on offer, seizing the sprint, time trial, one-mile and five-mile events. For good measure he also broke the Australian 1000m unpaced standing start time trial record. Later in 1949 he travelled to Copenhagen in the form of his amateur life and became World Champion for the first time in the amateur sprint – winning every round in two straight matches.

The following year delivered more glittering achievements. Patterson returned to Europe and secured his second World Championship in Liege, Belgium, this time in the amateur pursuit. Whilst at the 1950 British Empire Games in Auckland he won silver medals in both the 1000m sprint and 1000m time trial, finishing behind Mockridge on each occasion.

As a clear sign of his remarkable popularity, the still-amateur Patterson was able to travel widely in his early career not through the generosity of the Australian Amateur Cycling Association, but rather private funding organised by cycling enthusiasts such as Leo Keating, Nick Grey and the retired champion, Sir Hubert Opperman.

Despite the lure of medals at the 1952 Olympic Games in Helsinki, Patterson turned professional in 1951 and the success kept coming. He won the world professional pursuit championship in 1952 in Paris and repeated the feat in 1953 in Zurich. As a four-time World Champion he then dismantled the Australian 1000m sprint record by nearly three seconds in March 1954, setting an extraordinary new mark for the time of 1 minute 9.25 seconds.

After coming frustratingly close on several occasions during the 1950s, including a narrow second place in 1953, Patterson finally won the world’s oldest track race, the Austral Wheelrace, in 1962 thanks to a daring ride at the Olympic Park Velodrome in Melbourne. In doing so he became the first scratch marker to triumph in 40 years. His brother David narrowly missed the podium, finishing fourth.

“I’ve been trying to win this race for 10 years and I’ve done it at last,” said a jubilant Patterson immediately after his victory, according to The Age (Monday, February 12, 1962). Many who saw it regarded it as one of the best track performances they’d ever seen and Patterson’s own son, Rik, suspects his father saw it as his finest hour – a framed photograph from that glorious night hung proudly in the family home for many years.

By now well into his mid-thirties, Patterson continued to win big races, adding yet more State, National and Six-Day titles to his overflowing trophy cabinet. He travelled all over Australia, winning a string of lucrative Six-Day races everywhere from Townsville, Newcastle and Launceston to Melbourne, Whyalla and Perth. Two years after his maiden victory he returned to claim the Austral for a second time in 1964. Starting again from scratch he became the first rider (and still one of only four together with Danny Clarke, Laurie Venn and Stephen Pate) to have won multiple Austral Wheelraces from scratch in the race’s 116-year history.

Sid Patterson was sponsored by Malvern Star for much of his riding career, a mantle he inherited from the legendary Hubert Opperman. His successes featured prominently in the company’s promotional materials for many years. However, somewhat contentiously it has been suggested that all four of his World Championships were actually won aboard a British-made ‘Rudge’.

Unsurprisingly given his powerful style of racing, Patterson also suffered his share of serious crashes over the years, including breaking his right shoulder while training at Parc de Princes velodrome in Paris, a nasty tumble in Hobart that left him with a broken collarbone and facial lacerations, not to mention numerous spills at the historic North Essendon Board Track. He also had the occasional run-in with officials, including being stripped of a win in 1951 for holding back an opponent during a race in Manchester, and earning a 90-day suspension for reportedly throwing his bike and punching a commissaire at Melbourne’s Olympic Park.

In 1999, aged 72, Patterson died of liver cancer. The Sid Patterson Grand Prix is held in Melbourne annually in his honour.