UPDATED: X-Rays and cat scans have shown no breaks or fractures however Paddy Bevin sustained ‘multiple contusions and bruised ribs and hip’ according to a statement from his team.

‘Bevin will be observed overnight and will undergo a concussion test on Sunday morning to determine whether he is able to start stage six and attempt to defend his race lead to become the first New Zealander to win the Santos Tour Down Under’, his CCC Team said in a statement issued around 8pm Saturday night.

Bicycling Australia will be at the startline of Stage 6, the final stage of the race, and will deliver the latest news via our social pages throughout Sunday.

Earlier: Tour Down Under leader Patrick Bevin was rushed to hospital after the completion of Stage 5 of the race, the New Zealander crashing heavily in the final 10km of a thrilling and controversial day’s racing.

Through a gutsy effort and with the help of his CCC teammates, Bevin was able to re-join the peloton. He looked to be in great pain shortly after finishing the stage and was heard to say “I need to be X-rayed” as he climbed into the waiting ambulance.

Caleb Ewan’s celebration of his first WorldTour win for Lotto Soudal was short lived, the nuggety Aussie being disqualified for headbutting young Belgian rider, Jasper Philipsen of UAE Team Emirates in the final 400m to the line. Commissaire’s ruled in favour of Philipson and he enjoyed his first WorldTour victory.

“For sure it’s difficult,” Philipsen explained about the incident, “Caleb is one of the strongest sprinters in the world and I tried to also take my position and go into the wheel of Sagan but he was already there. So, it was a bit of a fight in the heat of the moment. But then, when he bumped me, I went a little bit down because I didn’t want to mess too hard.”
All Eyes On Willunga
Sunday January 20 will decide the overall winner of this year’s TDU – but not before three large loops of the McLaren Vale vineyards and two ascensions of Old Willunga Hill that for the past four editions has seen Richie Porte its master and commander.
While we all eagerly await news of Paddy Bevin and whether he can start the final stage of the race, he holds a lead of just 7 seconds over Daryl Impey of Mitchelton-Scott.
All eyes will be on Impey plus of course the standout climbers of the race – Richie Porte, Wout Poels and and Michael Woods – as attention turns to the final and deciding stage of the race. 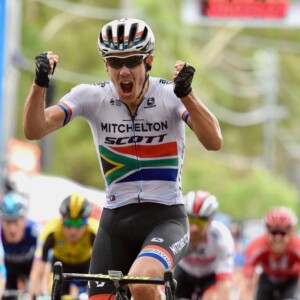 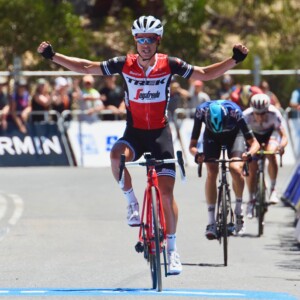