Daryl Impey has done it, the Mitchelton-Scott rider and South African national champion has won back-to-back Tour Down Unders, the first rider to ever do so.

But the day was not all Daryl’s, with ever-popular Aussie Richie Porte winning the final Willunga Hill stage. Not only did the crowds roar for Richie and Daryl, enormous respect was shown for earlier race leader Paddy Bevin who suffered badly after crashing heavily on Stage 5 of the race. Bevin managed to finish Stage 6, much to the delight of the adoring and respectful crowd.

Porte, who was in 16th place at the start of the final stage, was propelled to 2nd overall after claiming his 6th Willunga Hill victory.

“It’s a hard race for someone like me to win, one hilltop finish and that’s it,” Porte said.

“But we came here with Trek-Segafredo – my new team – and the boys were absolutely fantastic the whole week,” he added.

“Hats off to Daryl Impey for the win, but to win six times on Willunga is a great feeling.”

With Team Sky’s Kenny Ellisonde and Wout Poels putting in a scintillating performance on the first then second ascent of Willunga, Richie said the climb “was probably easier than ever” because of being well positioned.

“Kenny Ellisonde did a fantastic ride there for Wout Poels, that was hard to have to take it up myself,” Porte said.

“I had to gauge my effort. To be honest, I thought I’d had it there, but when I heard (director) Kim Andersen on the radio telling me that everyone behind me was suffering too, it gave me a second wind. But I tell you what, the last 300 meters were probably the longest 300 meters, it really hurt. But it was a sweet victory.” 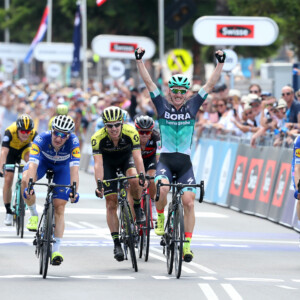