I received a text from Cycling Hubby the other day, which read as follows – ‘Some mates and I are planning on riding up to Lamington National Park on Sunday and we would love it if you could meet us at the top for lunch. Then perhaps you and I could do a bushwalk, and possibly camp the night.’

This was such a simple text, yet it held so many layers of meaning. As I read through it, I could see Cycling Hubby’s thought pattern unfolding and my mind interpreted it as follows Some mates and I are planning on riding up to Lamington National Park on Sunday and we would love it if you could meet us at the top for lunch.
Being a 120km one way trip, of which 37km is a climb, I knew that Cycling Hubby wouldn’t be keen on riding back, yet he had no way of getting back, other than to ride. So what he was really saying here was, ‘I am riding up to Lamington with some friends on Sunday and we REALLY need someone to drive us back, so I need you to come and get us.’ 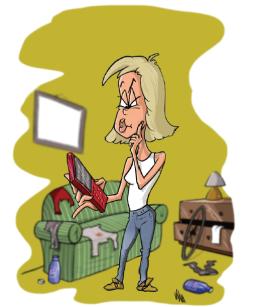 Then perhaps you and I could do a bushwalk……. At this stage Cycling Hubby had obviously realised that he needed to sweeten the deal in some way – hence the invitation for a bushwalk. However, the idea of him going for a bush walk after a big ride is laughable. This is a man who can ride his bike for hundreds of kilometres without any complaint, but ask him to walk a block to collect some milk and he will whinge the whole way there and back. Any walking involving stairs or any form of an incline is just out of the question – he refuses, proclaiming “my legs are too tired”.……..and possibly camp the night.
This is the part of the text where Cycling Hubby had assessed the text so far and felt he needed to throw a little something else in. The offer of quality time needed to outshine the ride time in order to make this whole invitation look a little more genuine. So the offer to go camping was thrown in. This is what I like to call the ‘Quality Time Illusion’. He was offering to go camping with me, but knew he wouldn’t actually have to, as I needed to be back early Monday for work. However, this offer may just be able to trick me into believing that he had actually arranged it so that we could spend time together.
I was reluctant to commit to the trip knowing that I had an assignment deadline looming over my head and a house that was in desperate need of a clean. I needed to carefully consider my response. Should I call his bluff on the ‘Quality Time Illusion’ by replying; ‘Camping sounds great!’ Should I embrace the act of procrastination and agree and go along? In the end I decided to be smart about it and play his game. Cycling Hubby needed my taxi service and I needed a cleaner. So a deal was made, I provide a pickup service for Cycling Hubby on Sunday and he promises to have the house clean by Monday afternoon.
After our adventure to the mountains we rolled back through the door late Sunday night when Cycling Hubby’s phone rang…… Some other cycling buddies had Monday off and were requesting his company for another big ride. I watched Cycling Hubby squirm under the pressure – he knew he had committed to cleaning the house, but the offer of a lengthy ride two days in a row – how could he possibly refuse? Unable to turn down the offer of a ride, Cycling Hubby agrees to go. The offer of a ride is like a carrot dangling in front of him as he immediately begins an attempt at completing the cleaning, leaving his Monday open for a ride.
So, in the end I provided that taxi service required by Cycling Hubby whilst, Cycling Hubby, well, he attempted to hold up his end of the bargain by cleaning late into the night. As they say, resting is all the sweeter when you can watch others working.