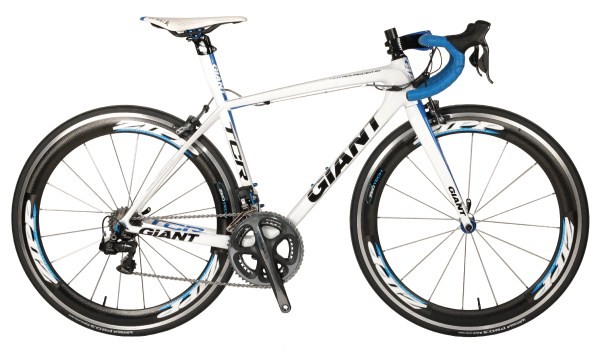 In this year’s Tour de France, the Giant brand will be well represented by Team Rabobank. The bikes they will be riding are very similar to our test bike, the top of the line TCR Advanced SL 0. All that is different is the lack of a Rabobank decal. At $12,999 this bike isn’t cheap. So what goes into that price tag? The frameset with integrated seatpost (ISP) is the centrepiece and the technology behind this frameset is the world’s best. Apart from the state of the art carbon frame and top of the line components, there are two main factors that push the price of this machine up. One is that this bike comes with Shimano’s electronic Di2 shifting. 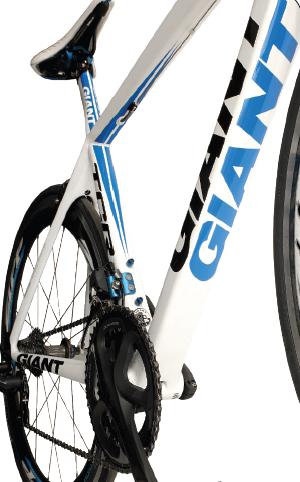 The second reason is the Zipp Zedtech 404 clincher wheelset where the customised graphics, dimpled hub and silicon nitride ceramic bearings adding a substantial premium to the standard Zipp 404. Giant also offer a Rabobank team bike model and by using the mechanical Dura-Ace 7900 groupset and Shimano Dura-ace carbon C-50 wheelset, and a few other minor changes, the price drops to $8,499. Many of the Rabobank team members regularly use Di2 and exclusively use Shimano wheels, so what we will see the team actually ride in the tour is an amalgamation of these two models.

Amazingly, given the ubiquitous nature of Giant bikes, this was my first ride of a Giant of any description. It’s probably akin to growing up in the 80s without ever having played a Rubik’s Cube. Speaking of which, the tube profile of the TCR Advanced SL is very square. The ‘megadrive’ oversized down tube resembles a block of four by two, as does the seat tube before it rounds off to cut through the top tube and then flattens into an airfoil at the seat mast. Even though there is such a wide variety of tube shapes, they all mold beautifully into a whole.

My favourite characteristic of this frame is the head tube and fork junction. The bottom bearings are a huge 1 ¼ inch while the top are 1 1/8. The way that blue accent line on the fork matches up to the round head tube and how that shape molds seamlessly into the angular tubes is simply magic. As is the way the thick white paint giving way to the black windows of carbon weave. The colour coordination of the seat, bars, stem, wheels even down to the bottle cage bolts is too. The attention to detail and finish on the Advanced SL is simply flawless.

This year’s Tour starts with a prologue through the streets of Rotterdam. The Dutch based Rabobank team will be keen to make a strong impression. Even though this bike won’t be used in the prologue, it is interesting to note that last year every Rabobank team member used Shimano Di2 on their time trial bikes. With this level of confidence in electronic shifting I was keen to find out if it really is that good. My first ride was on a chilly spring morning and the use of long fingered gloves emphasised the almost magic characteristic of how a simple wave of the fingers resulted in a gear shift. The action of the button is very light and offers very little feedback to the user. There is no or click, either audible or sensual, and as long as you press them firmly enough (about the same pressure you’d use on a keyboard) the gear will change.

I’ve been using SRAM recently (where there is only one lever) and initially made a few miss shifts by pressing the wrong button. After a few consecutive rides my old brain adjusted and my mistakes diminished. If you were coming directly from using Dura-Ace 7900 then I don’t believe this would be an issue. The front changer is simply awesome and with a high pitched mechanical whir the chain moves across instantly. You could imagine this noise could give competitors nightmares when hearing this sound pre-empting a big ring attack up a hill. By comparison the rear changes were silent, except when the front changer self adjusts so it doesn’t rub the chain in cross over gearing.

In a way I missed the tactile nature of mechanical shifting, but the fact that each and every gear change is simply perfect makes up for that. The system performed faultlessly throughout the test without any issues. I’m sure that when the ball point pen first came out that people used to prefer the quill, but   only for a time.

There is another thing that sets this TCR apart from the rest. It is purely designed for Di2. There is no provision for standard gear cables. The frame’s internal routing of Di2’s cords is very nicely done and the battery sits nice and low tucked away under the left hand chain stay. 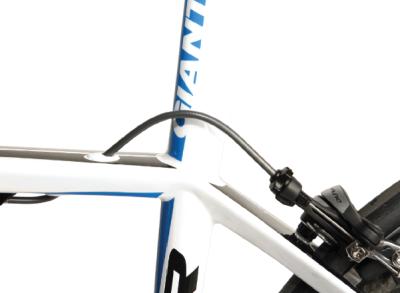 Stage Three of this year’s Tour will see the riders tackle cobble sections totalling 13km with the final section coming only 10km from the finish. In this year’s Paris-Roubaix half of the Rabobank squad used Di2. Through rain and mud, or choking dry dust the Di2 system has clog and, excluding any major accident, shifting will remain perfect.

But how would those massively oversized frame tubes and fork handle the pounding of the cobbles? In a way you would expect that those characteristics of front end stiffness and torsional rigidity through the drive train are counterproductive to achieving a comfortable ride and in a way that is true. This bike is a race machine at heart, and it doesn’t shield the rider from the ruts and holes on the road. But if anything the stiffness of the frame gives it a solid platform to bounce over whatever comes beneath it. The bike feels solid and sure-footed over the rough stuff, and while it is by no means an armchair ride you are always in control.

The early Tour stages will favor the sprinter, and it is here that these massive tubes come into their own. While Australia’s Graham Brown may not get a chance to ride the Tour (the team although not finalised, will most likely focus on supporting Menchov or Gesink), this bike is the perfect tool for a sprinter. It shows no sign of flex under pressure, with the stiffness of the front end, aided by that massive but still light stem, making sure all the power gets through to the road. I have to remind myself that only a few years ago this level of torsional rigidity would only be found on track bikes with steel bars, yet now it is available in carbon and at such a minimal weight. With the lighter Di2 brake levers the front end of this machine is feather weight.

Another factor of the early stages of the tour could be the wind. While Rabobank will be using Shimano wheelsets, the Zipp 404 is arguably the most successful and desirable wheelset in the peloton today. I assumed that the 404 would be too deep for general riding and may be adversely affected by cross winds. But for almost all but the windiest days I wouldn’t hesitate on using these wheels. The bulbous rim is as wide as the 23mm tyres and seems to make the deep rim more stable in cross wind than I’ve felt with flatter rims of a similar depth. Cost is probably the only reason why you wouldn’t use these wheels every day. I honestly couldn’t say whether the silicon nitride ceramic bearings, and extra dimpling on the hub made any difference, but overall these wheels were a pleasure to ride and they certainly felt fast.

The first summit finish of the 2010 Tour comes at Morzine-Avoriaz on Stage Eight. Keep an eye out for Denis Menchov supported by Robert Gesink and aided in their efforts by another factor of this bike – its weight, or more importantly the lack of it. With a lower profile set of tubular wheels the weight will easily be right on the UCI limit of 6.8kg. But this is not a bike where other characteristics are diminished in favour of making it light at all costs. Its stiffness, poise and strength belie its lightness.

On the descents I found the bike very stable and easy to handle. The Dura-ace brakes against the alloy braking surface offered extremely secure and well modulated braking power. Diving down the descents you could leave braking to the last minute and feel confident that you’d pull up in time. In an early ride my small hands had a little trouble stretching to the brake lever, but these levers are now easily adjustable and a quick turn of a screw driver had the levers set up perfectly.

If I could fault this bike I’d say that the steering in the size tested was a little on the slow side. One positive of this is that it remains very stable. In this small frame the head tube angle is 72 degrees, in part to make sure your feet don’t hit the front wheel while turning. In larger sizes it steepens to 73 degrees, which in turn would quicken the steering. Also the head tube is fairly long in the small at 135mm and I’d have to source a different angled stem to get my bars low enough to be optimal.

This bike has already seen success at the Giro and only time will tell if it will carry Menchov to the podium at Paris. No expense has been spared in the build and this is nowhere more evident than in the choice of wheelset. In a way it is a shame as the choice of wheels makes this bike unaffordable for many. The Zedtech wheels are substantially more expensive than the standard 404, and I feel that it may have been better to make the upgrade optional. Even so, this bike, like all Giants, is great value for money when you compare it to the competition offering a similar build.

The TCR Advanced SL 0 is a pure race machine and offers the rider the very latest in technology. While some may argue that adding electronic gears detracts from the mechanical purity of the bicycle I think it adds to the enjoyment and excitement of the ride. You can be cross eyed in pain, gasping for air while suffering up a hill and with a simple tap of your finger the ideal gear is selected precisely and without mistake for you to kick out from the hairpin. That’s got to bring a smile to your face! It is still a machine. A great machine! And one that is at the cutting edge of advancement.