A bicycle, like all machines, obeys the laws of physics. These rules govern creation, use and dispersion of energy. In the bike’s case, the rider puts in power from leg muscles and the bike converts that effort to forward motion. This motion is resisted by rolling resistance and air drag (also gravity whenever the road points upwards). At racing speeds, air drag (which increases with the cube of velocity) is far greater than rolling resistance (which increases linearly with velocity)–the proof of that is in the current crop of time trial bikes streamlined to the limits of the rule book.

But what about this rolling resistance thing? What causes it? How can it be minimised? Should anyone care?

Sit on a bike and the tyre sidewalls bulge outwards. On a mountain bike with perhaps 20 psi in the fat tyres, this bulge is marked. On a track bike with upwards of 200 psi in some skinny singles, this bulge is small. The bulge always sits at the bottom (especially when the tyre suffers from a puncture–that is a terrible old joke) but the tyre goes around as the bike goes forwards. 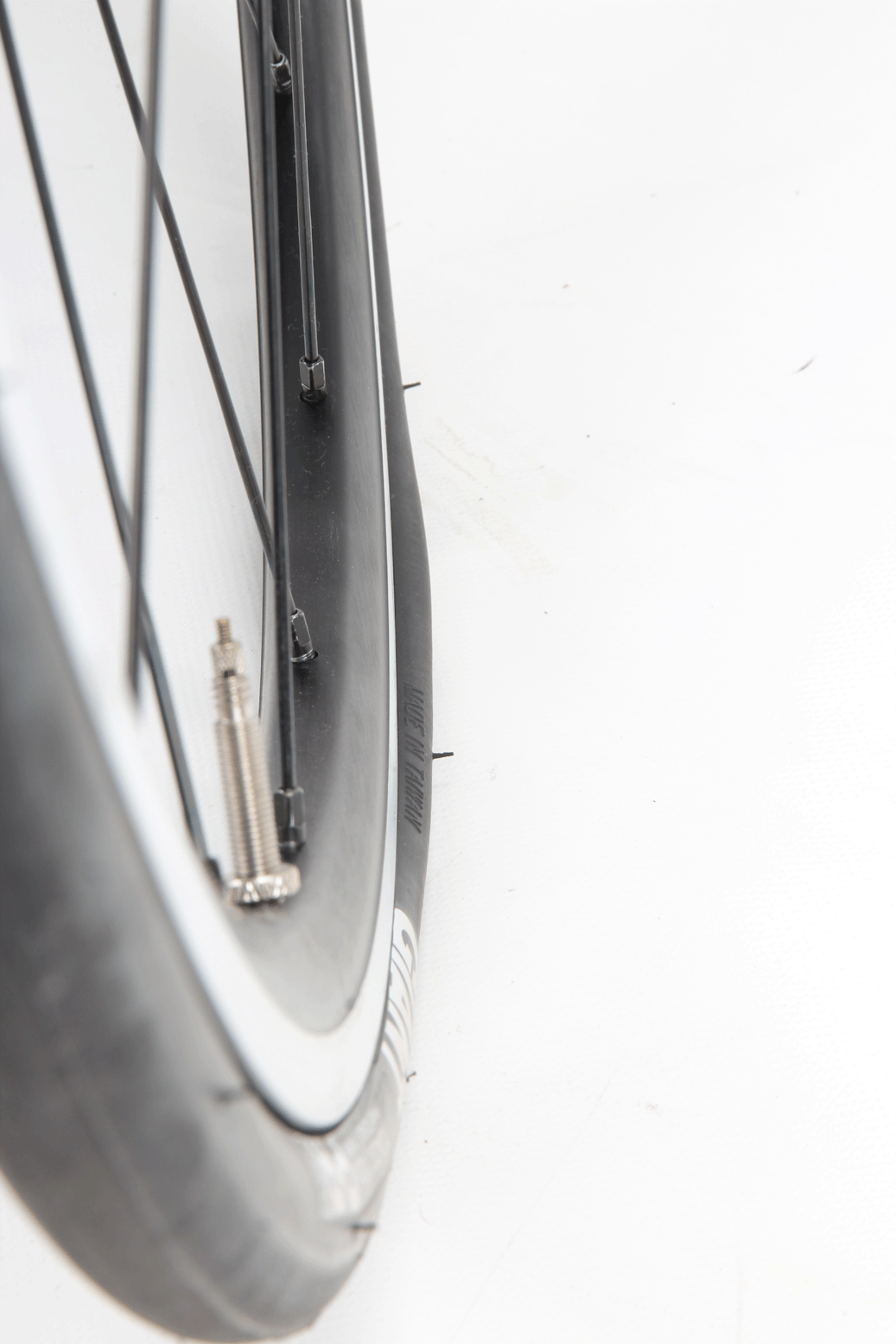 This means that the sidewalls of the tyres flex and un-flex continuously. Energy is required to flex the material of the tyre (and tube). The air in the tyre is a spring. The energy put into the spring as the tyre compresses is mostly put back as the tyre expands away from the road–but not 100%. This is termed hysteresis–more energy is required to flex the tyre than is returned in un-flexing the tyre. This missing energy is taken away from the speed of the bike. Effectively the force from the road on the tyre doesn’t point straight upwards but slightly backwards, opposing forward motion.

When the wheel turns around it does so on bearings. Traditionally these would have been steel balls riding around inside steel cups of the hub and also on steel cones on the axle. The balls roll around with minimal friction. If you have ever held a good quality wheel in your hand and spun it you’d notice it goes around for many revolutions before stopping. More recently it is likely that the bearings are housed inside a cartridge composed of axial races and steel balls. Some cartridge bearings are being made with angular races to bear the side loads of the wheel better.

The state of the art is hybrid ceramic bearings with ceramic balls on steel races. The two main advantages of ceramic bearings are roundness of the balls (it isn’t that ceramic balls can be more round than steel, just that extremely round ceramic balls are generally available) and the inability of the ball and the race to exchange material due to their dissimilar nature. The failure mode for hubs involves a transfer of material from the cone to the ball producing a rough line on the cone and an egg-shaped ball (due to failure of the lubricant to keep the two separated on a film of oil). Even if a ceramic ball comes into bare contact with the steel race under load, it cannot weld to it and pull out a tiny piece. There is also the option of fully ceramic bearings where the race and the ball are ceramic, but I have not seen these offered to the bike industry (most of the uses for these seem to be in high-temperature industrial uses).

Bearings are graded by their average deviation from perfectly round. Grade 25 balls (pretty good) are 25 millionths of an inch maximum deviation from round. Grade 25 balls are similar to those bearings found in high-end hubs from big manufacturers. Grade five balls are extremely round, five times as round as Grade 25, while Grade zero balls may not be perfect but are less than one millionth of an inch out of roundness. Ceramic balls tend to come in low grades and high grades. The low grade balls are intended for furnace carts (the ceramic withstanding the heat) and are not appropriate for a bike hub. High grade ceramic balls are typically Grade 10 or better.

On a mountain bike it may be possible to run low enough pressure that movement between the tyre and tube are possible. On a road bike at any reasonable pressure there can be no movement between the two–they function as a unit. It does, however, mean that the tyre is effectively thicker with the inclusion of the tube. Lightweight tubes in butyl or latex should not only reduce rotational mass, but also decrease rolling resistance. Tubeless tyres are beneficial by removing the chance of pinch flat, reducing the mass (the total of tube and tyre usually weighs more than the tubeless tyre alone) and lowering rolling resistance.

The rolling resistance curve for a tyre flattens out around 100 psi. There is a bigger change between 80 and 100 psi than between 100 and 200 psi. Running tubeless shifts this curve down so instead of running 120 psi perhaps 90 psi will produce similar rolling resistance but a much smoother ride on broken pavements (while no chance of a pinch flat). While the curve is quite flat above 100 psi, it does continue to decrease with increasing pressure. As long as the tyre remains in contact with the road, more pressure produces lower rolling resistance. At some point the tyre becomes so firm that it bounces off the irregularities in the pavement. That bouncing can (and usually will) increase rolling resistance–not to mention causing a loss of control.

The wider the tyre, the more sideways force it exerts on the rim under inflation (meaning the less pressure the rim can take prior to catastrophic failure). That means there are practical limits to what tyre will fit on which rim safely. You cannot deviate too far in the hunt for lower rolling resistance without running into problems.

The hysteresis of the rubber that makes up the tread is the primary reason for this. Under load, the tread squashes. This applies equally to lightly treaded road racing tyres and to full knob off-road tyres. If you paid attention at the last Olympics on TV, many of the track competitors were using pale pink tyres. These tyres have a thin layer of latex rubber over the tyre body–the thin, smooth latex layer reducing hysteretic losses to absolute minimum (at the expense of anything approaching durability).

Singles generally have a higher rolling resistance than a comparable clincher tyre because of losses to the glue. Standard contact cement used to glue the tyre to the rim never dries hard. That is handy if you get a puncture on a ride (and carry a pre-used spare tyre) because the old tyre shouldn’t be that hard to get off and the new tyre will stick to the rim much better than a dry tyre would (but not as well as one properly glued on). But it takes energy to deform the glue and this shows up clearly in rolling resistance testing. The best single using road glue is worse than even a mediocre clincher. Trackies use shellac which dries rock hard and under this circumstance the rolling resistance is less because there are no clinchers comparably light to the finest track singles. Look at the sidebar for an explanation of why they’re still popular.

Rolling resistance occurs where the tyre meets the road and in the bearings of the bike (mostly in the hubs but also in pedals, bottom bracket and jockey wheels). It is a small proportion of the total force working to slow down your bike, but it is definitely worth the effort to consider how you can minimise it: