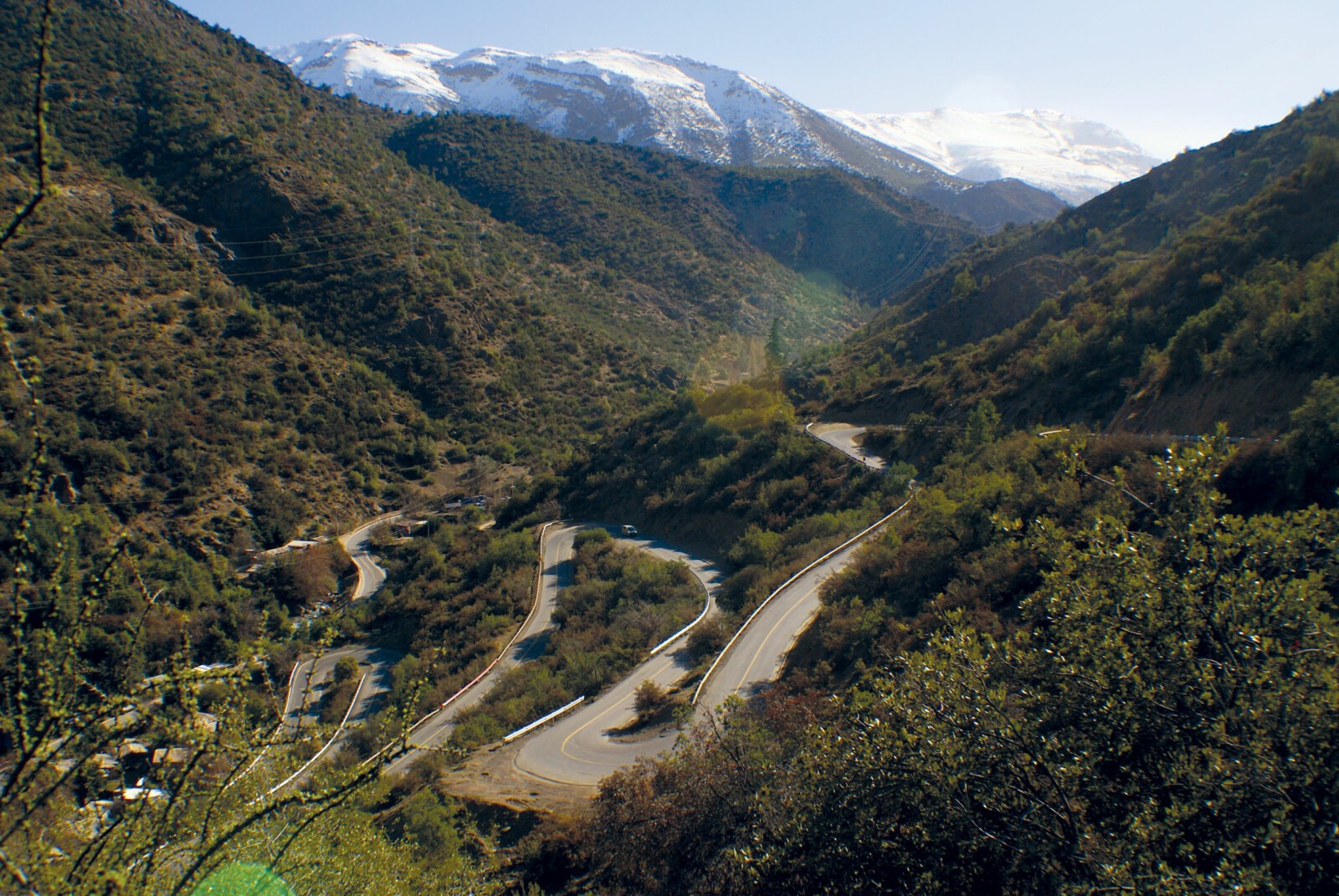 Santiago is a city of around six million people and lies approximately 100 km from the coast on a similar latitude to Sydney at an elevation of about 600m. The climate is generally dry – only 350 mm of rain per year and average maximum temperatures vary from 15 degrees in winter to 30 degrees in summer. Wind is usually non-existent or very light so generally the climate is ideal for cycling. The San Ramon range to the south-east provides a spectacular back-drop to the city; particularly in winter when it is covered in snow. Further to the east lie the Andes with Cerro Plomo (5,600m) watching guard over the city.

However, cycling in Santiago is not for the faint hearted. With all the traffic, smog, busses, dogs and other assorted hazards there are lots of excuses not to ride. But head out of town a little and there are some of the biggest and best climbs around with roads and scenery like nothing in Australia. And in Santiago there is always Cerro San Cristobal – by far the most popular place to ride in the city.

Cerro San Cristobal
The people of Santiago love to ride their bikes but mostly for commuting. Since the traffic is generally bad and there are only a few cycle paths they tend to ride on the footpath, much to the annoyance of most pedestrians. The exception is Cerro San Cristobal where thousands of Chilenos flock to exercise on weekends; on foot, with dogs and on all sorts of bikes but mostly mountain or hybrid bikes. San Cristobal lies inside the Parque Metropolitano which is one of the largest metropolitan parks in the world. It is almost in the center of Santiago and on a clear day the views over Santiago to the San Ramon range and Andes are spectacular. A 30m statue of the Virgin Mary stands atop Cerro San Cristobal and can be seen from many places in the city. Fortunately vehicle traffic is rarely a problem as there are no through routes and cars are discouraged by a 4000 peso ( $8) entry fee to the park (no fee for cyclists). Peak times are mid to late morning on the weekends and are best avoided.

Cerro San Cristobal is the best place to watch the sun rise over Santiago and the best way to get to the top of San Cristobal is by bike! There’s a choice of four routes and all join together for the last kilometre to the top which ascends to the base of the Virgin Mary statue. The most popular route is from the entrance at the end of Pedro Valdivia and climbs steadily for 4.4 km with an average gradient of 4.6%. The next most popular route from Pio Nono is slightly longer at 5.0 km with a similar gradient. The route with the least traffic and the most variety (and my favorite) is Zapadores which starts on the north side of the park. It is 5.7 km at 5.3% and has a couple of switch-backs and pinches of 10%. It’s also the best descent from the summit!

The other popular climb on the outskirts of Santiago is Paseo Andino. You might see the occasional mountain bike but mostly it’s roadies you will find here. On the south side the climb starts in the outer suburb of Lo Barnechea at an elevation of 880 m. The first two kilometres are at an average gradient of 8% and then it is quite lumpy for the remaining four kilometres to the top at 1,150m. Throughout the climb there are views of the snow-capped Andes and from the top of the pass can be seen the town of Piedra Roja, a relatively new suburb of Santiago. The descent on the other side is one of the best. The surface is good, the corners not too tight and experienced riders can average 60+kph on the 7km descent.

You can get a coffee in Piedra Roja or do a loop around the town but then there is a brutal climb back up that awesome descent! It starts at 9% gradient and, apart from a couple of flattish spots doesn’t get much easier. The total climb is 520m over 7km for an average gradient of over 7%.

Los Andes!
For the really big climbs, head east out through Las Condes and Lo Barnechea and take the right fork at the Shell garage on Avenida Las Condes. This is the start of Camino Farellones at 850 m elevation. From here the road twists and turns and gradually climbs up the floor of the Mapocho Valley until another fork is reached after 16 km at Corral Quemado (1300m). The road now starts to climb up the side of the mountains and the next 14.2 km is a big test of lungs and legs. There are 40 switch-backs, all individually numbered to count off as the road climbs skywards to a junction just before the ski town of Farellones. To reach here from the intersection near Corral Quemado the climb is almost exactly 1000m at an average of 7.1%. There is one flat section about halfway which provides an opportunity to recover but there are also several pinches of 10+%. Farellones is a good place to have coffee (if you can find somewhere open) before heading back down the same way.

Alternatively you can continue another 5km up the same road to the ski resort of La Pava at 2800m, or the real masochists can take the right fork before Farellones and head up to Valle Nevado. There is a welcome descent for a few km before the switch-backs start again; another 20 on the final climb to Valle Nevado at 3000m. On this final section the gradient may be only 6.5 % but up here there’s 30% less air than at sea level so this climb is going to hurt no matter how fit you are! As you climb out of the valley the views of the Andes just get better and better. The hotel at Valle Nevado seems to be always open and has excellent coffee and croissants. Depending where you start from in Santiago the total climb to Valle Nevado is around 2400m!

The South
The Maipo and Colchagua valleys just a couple of hours south of Santiago are two of the prime wine making areas of Chile and provide good opportunities for more relaxed cycling without the big climbs. The road through the upper Maipo, or Cajon de Maipo, follows the Maipo river and climbs at a more manageable gradient of around 2%. The river valley is quite scenic and also provides views of the Andes. The ride can be started in La Florida on the outskirts of Santiago but to avoid some of the traffic it’s better to drive to San Jose de Maipo. From San Jose to the end of the bitumen near Banos Morales is 40 km with a total climb of 700m.

For wine lovers the lower Maipo and Colchagua valleys are a must. The Chilean wine industry is booming with several of the top wines having received international awards and selling for hundreds of dollars a bottle. Most of the wineries offer tastings and/or restaurants and it is easy to spend a weekend or longer cycling and sampling. The roads are generally flat and there are numerous routes to choose from which wind around through the vineyards and small towns. Again, it’s best to ride in the mornings when the weather is cool and clear and most Chileans are still sleeping.

Away from Santiago and the Farellones climbs, road bikes and lycra are not common in Chile so you may receive some looks and/or shouts of encouragement. Chileans are generally peaceful and friendly people but they can be aggressive drivers, particularly when the traffic gets heavy. However, in two years I have never suffered any road-rage or abuse like I occasionally received in Australia.

How to get there
Nearly all international flights to and from Chile use Santiago airport (SCL). Qantas flies direct from Sydney to Santiago and LATAM (previously LAN Chile) fly to Melbourne or Sydney via Auckland. The time difference to Australia’s east coast is 13 or 14 hours; depending on timing of daylight savings.

Where to Stay
Santiago has a huge range of accommodation from 5-star hotels down to 1-star hostels with prices to match. The better parts of town are the north-eastern suburbs of Las Condes, Vitacura and Lo Barnechea which are also the closest to the rides described. Las Condes includes the main business district and plenty of good hotels and restaurants. In the Colchagua Valley Santa Cruz is a good place to stay while exploring the wineries and smaller surrounding towns. It has a good range of hotels, restaurants and an excellent museum.

When to Go
Santiago in winter is cold and frequently blanketed in cloud or smog and not recommended unless you want to go skiing. The remaining months are generally fine for cycling although it will be cold in the mountains in September and May. Apart from being freezing cold, Camino Farellones is not recommended in the ski season due to heavy traffic which may extend into October.

Money Matters
The currency is the Chilean Peso (CLP) and one Aussie dollar buys around 500 CLP. The exchange rate to the Aussie dollar has been relatively stable for the past few years. MasterCard and Visa are widely accepted. Debit cards can be used to withdraw cash in most ATM’s in Santiago and other popular areas but suitable ATM’s can be hard to find in more remote areas. American dollars may be useful if travelling to other parts of South America but are generally not used in Chile.

Bike Shops
Local bike shops are plentiful in Santiago but not so common in other areas. Parts are expensive due to the 19% tax applied to all imported goods but labour is cheaper than in Australia. High end spares for road bikes (Dura-Ace, Ultegra, etc) are hard to find due to the high cost and limited demand. 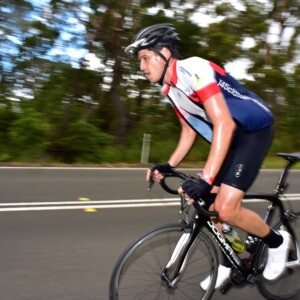 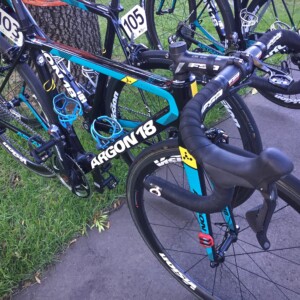