Gladiatorial riders. Frenzied racing. Jam-packed, smokefilled arenas. Six day racing was massive, and there was no bigger name on the professional boards than a muscular blond chap from emu, north west of Melbourne.

In a remarkable career that saw him relocate to the United States after being spotted by a promoter at the age of just 19, Goullet won in excess of 400 professional races across Australia, Europe and North America, together with multiple National Sprint Championships. An eminent New York newspaper cartoonist once labelled him a ‘human motorcycle’. While an equally renowned sportswriter of the day likened Goullet’s six-day dominance to two of America’s sporting giants of the 1920s, baseball’s Babe Ruth and boxing’s Jack Dempsey.

Hurtling shoulder to shoulder at speeds in excess of 40mph on steel bikes with wooden rims, Goullet was blessed with a rare physical makeup that saw him excel in both sprints and endurance events. His palmarès boasts victory in no less than 15 six-day  races, including the first ever Paris Six-Day. Along the way Goullet notched numerous world records at distances ranging from two-thirds of a mile to fifty miles. In 1914 he also set the world record for the furthest distance ever ridden in a six-day race – over 4,400km – when he teamed with fellow Australian, Alfred Grenda, to win at New York’s famed Madison Square Garden; a race he would go on to win eight times in his career. According to news reports from 1914, Goullet rode the final hour of the recordbreaking race solo after his partner, Grenda, was struck down by acute appendicitis.

While in far better shape than his hospitalised teammate, the 1914 race still took its toll on Goullet, as he explained to the Saturday Evening Post in New York several months later: “My knees were sore, I was suffering from stomach trouble, my hands were so numb I couldn’t open them wide enough to button my collar for a month, and my eyes were so irritated I couldn’t, for a long time, stand smoke in a room.”

A decade later, and with more than a hint of painful irony, Goullet himself suffered an attack of appendicitis during the 1924 six-day at Madison Square Garden. He refused to retire, finished the race and soon after collapsed and was rushed to hospital.

Goullet took US Citizenship in 1916 and like millions of young men from his generation, enlisted when America entered World War I in 1917. He was stationed with the US Navy at Pensacola, Florida but perhaps thankfully for the sport of cycling he never left US soil.

It’s impossible to profile Alf Goullet without touching upon the extraordinary amounts of money he is reported to have earned. By the peak of his career in the early 1920s he was so outrageously popular with cycling fans he was able to command enormous appearance fees from organisers just for showing up. Even in the earlier stages of his professional riding career Goullet’s cycling income far outstripped most Americans. In 1914, still just 23, he was reported to have earned $11,500 while the average annual wage was little more than $1,300.

It was a gap that continued to swell with his legend and popularity, arguably reaching its zenith in December 1921 when a crowd of over 15,000 descended upon Madison Square Garden to watch him claim the six-day race for the sixth time in just eight years. Fearing a tidal wave of gatecrashers, organisers even enlisted the local fire brigade to surround the building. Those who made it inside were not disappointed as The New York Times gushed: “Goullet won the race through the greatest exhibition of sustained speed ever known in history.” Together with his partner, a Tour de France stage-winner by the name of Maurice Brocco, Goullet shared $50,000 for the 1921 victory – a staggering amount in the post-war period.

Post his racing career Goullet, by then married, began selling life insurance and owned a local skating rink. He remained deeply modest of his achievements in retirement. It’s even been suggested his own son and daughter only learned the true scale of his accomplishments decades later when a procession of honours were bestowed upon him. Amongst countless other laurels, Goullet was inducted into the American Bicycle Hall of Fame in 1961, the Madison Square Garden Hall of Fame in 1968 and the Sport Australia Hall of Fame in 1986.

It appears Goullet continued to take care of himself after he stopped riding. In a 1991 interview, journalist Jim Langley suggested the then 99-year old looked more like 65. “I’m about to ask if his father is home,” wrote Langley, “when I comprehend that this is Alf himself. He is livelier than a spring chicken. His high-class Limey accent sounds grand and his blue eyes sparkle like a rock on a dame’s pinkie. He is gracious and friendly, the kind of guy with class written all over him. Goullet has had little formal education, but he could have written the book on charm and earnestness.”

Alf Goullet died in New Jersey in 1995 aged 104. At the time he had been the oldest living member of the Sport Australia Hall of Fame. 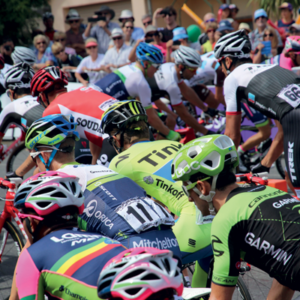