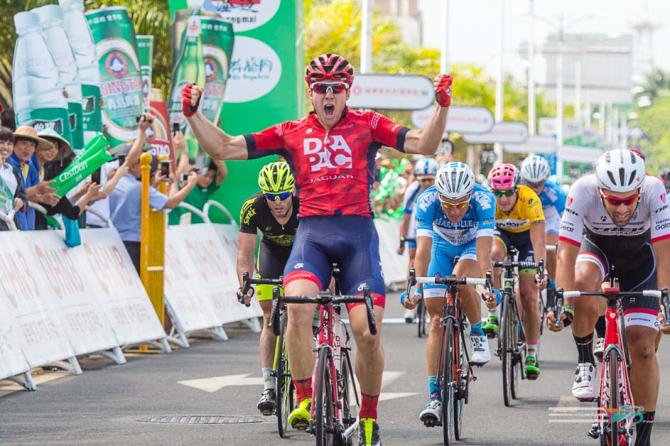 The Tour of Hainan has a 2.HC classification from the UCI governing body and attracts some prominent WorldTour and Pro Continental teams to the line up to compete for 1,487.6km of racing through 18 cities on the island. The Tour kicked off on October 20 and wraps up on the 28.

Brenton Jones from Drapac Professional Cycling Team took line honours in the last stage of the race on Wednesday after a solid effort during the 9 stage race on the Chinese Island.

The remarkable efforts of the Australian Drapac Professional Cycling Team have pushed 4 different riders into the top ten finishers in the first few days of racing.

Jones placed 5th on the second stage but his best result was a 2nd place on the longest stage of the race at 237km on stage 4, then a 13th place on stage 7 saw the sprinter prepare for the hills the next day.

Unfortunately Jones could not compete in the mountains and dropped significantly in the GC rankings to 88th after stage 8 where Phelan finished within the top ten and jumped to 9th on the GC.

During the final day of racing the Australian sprinter dominated the bunch sprint where he said a gap opened up, allowing him to punch through and win his biggest win of the year.

Jones said after the race at the official press conference, “The sprint was very messy because so many riders wanted to win today. I found the right gap with 200 metres to go. It was nice to come up with a win after crashing in stage 1 on the same finish. I think every bunch sprint this week has been with a head wind so I must have come from behind today. I got a nice and clean run to the finish. I’ve had a great support from the boys all week. It’s nice to win this last stage.”

Drapac had the ambition to finish well in the GC for the race after a great season of racing, with stage wins at the Tour Down Under, Jayco Herald Sun Tour, Tour of Taiwan, Tour de Korea and the Tour of Utah.

Italian race leader Sacha Modolo of team Lampre – Merida dominated the tour in the yellow jersey, finishing on the podium nearly every stage, he is coming off the back of a competitive Abu Dhabi Tour. Modolo was set up with the early lead and walked away with the yellow jersey.

Whilst the race is still busily underway, race organisers have made a bid to get the Tour of Hainan a WorldTour Ranking after the conclusion of this year’s event.

The organisers have said they would like to build on a strong foundation from a HC ranking to become a renowned event on the WorldTour calendar.

In it’s 10th installment, the race challenges riders with varied terrain through Provincial China and into the mountain stages later in the race. The race route proceeds in a clockwise direction through all 18 cities and counties on the island. This year the tour has 20 teams participating.