Search
Menu
Search
George Hincapie is known as a gentleman of cycling and rightly so. If it weren’t for a certain Lance Armstrong, Hincapie would have probably been the pre-eminent American rider of his generation. As it is, George seems content with what he has achieved, though it doesn’t stop him wanting a bit more, specifically a certain cobblestone trophy. A member of eight Tour de France winning teams, George lives in Greenville, South Carolina after being raised in New York. He has raced the Tour deFrance 13 times and finished all of them except the first. He placed second at the 2005 Paris-Roubaix and has represented his country at no less than five Olympic Games. Bicycling Australia met with George for an exclusive interview at the Tour Down Under where, once again, if it wasn’t for Lance Armstrong, he no doubt would have been the star attraction. But this doesn’t seem to faze George at all. Despite his obvious jet lag and still being in the process of adjusting to summer in Adelaide, he was courteous and softly spoken. We ordered coffee and you can probably tell from the length of the answers when it began to kick in. He wasn’t excited by the distant past, perhaps not wanting to be reminded how long ago it was, but there was never any sense of hiding anything. Rather his maturing of a cyclist was also the time of his maturing as a person who is open as well as honest. But the two things that ignite him the most passionately are talking about his family and of course, Paris-Roubaix. 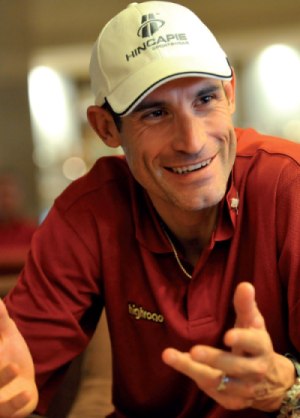 Bicycling Australia: Let’s start with the early days. I’ve been told to say this in a Bronx accent and see if you remember. Are you ready? It’s “Hey, Stay Outta da Joggers Lane!”
George Hincapie (Laughing), Yep, I sure do. That would be Prospect Park in New York. In the early eighties. There was always someone who would try to start something on the inside.
BA: That would be when you were racing with either TOGA or G.S. Mengioni?
GH: Probably both actually.
BA: I think you had something like a 50 race winning streak? And you had a rivalry with Jim Dougherty who later became a soignuer.
GH: Well, you know, I wouldn’t call it a rivalry (laughs). We were training buddies and we rode together just about every day. So, of course we’d race. But I usually beat him.
BA: And the winning streak?
GH: (George looks down and sort of embarrassingly shifts his weight) Oh, you know, I don’t know the exact number. Somehow I seemed to win most of the races I entered at that time.
BA: So growing up in America, who were your mentors and heroes at the time?
GH: Oh, Merckx of course, Hinault, all the classic guys.
BA: And in 1991 you went to the Junior Worlds but were a bit of a marked man. Tell us a bit about that race. I think Jeff Evanshine went on to win that race.
GH: Oh yeah, I was definitely marked. I had guys sitting on my wheel all day. Jeff Evanshine won. I had no chance.
BA: So in 1992 you did your first Olympics? What was it like to be representing your country for the first time?
GH: For me, that was the point where I realised what I’d have to do if I was going to make it as a cyclist. To race at the Olympics was a huge step up from where I’d been.
BA: So after that you raced the Tour de Trump in 2003. You won a stage but were later disqualified? Tell us what happened there.
GH: Well, it was a downhill sprint finish. We were going about 60kph and this guy started moving in on me from the right, you know, impeding my forward process. So I put my hand up to stop him and the judges said “You can’t take your hands off the bars”, so….that was it really.
BA: As someone who is considered a gentleman of the sport, is it something you regret.
GH: No, it’s water under the bridge.
BA: Your first Tour was in 1996 where you DNF’d. That was with Motorola?
GH: Yep, that’s the only one I didn’t finish. I crashed and had to get stitches in my head.
BA: You mentioned the Olympics being a step up for you. Was that first Tour de France another step up?
GH: Oh yeah, I suffered like a dog that race. It was terrible. I think I might have even subconsciously been wishing I could crash, it was that bad. It was unbelievable.
BA: What was that Motorola team like to be in? Because along with from ‘7 Eleven’, that was one of the ground breaking teams for America in Europe wasn’t it?
GH: Yeah, it was really good. As a young American you don’t get as much
respect as the other guys. Not as much as the Europeans. So that made it
a little more difficult. But as a team we earned that respect. We had Lance
on there and some other respected riders like Bauer and Sean Yates so it
helped me tremendously to grow up when I was in Europe.
BA: People say that Australian riders do so well in Europe because we
grow up without that cycling culture and it makes you tougher and more
ready to work. Is that the case for Americans too?
GH: Absolutely. For us to go there and do that it’s a huge step and a huge
sacrifice. You have to leave your family and make a new life, basically. I think
that’s why a lot of Americans tend to do pretty well once they get there too. 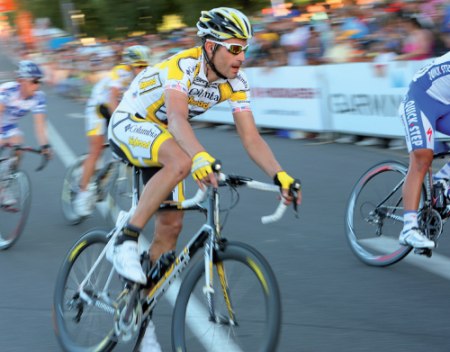