The overwhelming majority of road cyclists end their careers having never tasted World Championship success. Mauricio Fondriest is not one of them. In 1988 he became Italy’s 11th Campione del Mondo in just his second pro season. It was no flash in the pan. Over the next decade Fondriest went on to win 69 races in a career boasting classics, monuments and multiple grand tour stages. He also remains adamant he should have won a second world championship in 1991. The man from the town of Cles in northern Italy was one his generation’s most successful riders, with peers including Jalabert, Lemond, Kelly, Roche, Fignon, Bugno, Rominger and Indurain. Since retiring in 1999 he’s carved an equally impressive career in bike design through the company he founded, Fondriest Bici. Now 51, the father of three still rides regularly and remains hands-on in the business, known for his meticulous fine-tuning of the racing machines that bear his name. Fondriest looks fit as an Italian fiddle and you suspect he could still give the current crop of pros a serious run for their money.

BA: Mauricio, what brings you to Australia?

MF: For us it is our first time (in Australia). The main reason is business. But when we decided to visit some dealers I spoke with my wife, ‘why only stay for 10 days when we can stay for 20 and spend some time to actually visit and experience Australia?’ I’m here with my wife and my son.

BA: Are you enjoying your visit?

MF: Oh, yes. First we went to Brisbane and then five days on the Sunshine Coast. We enjoyed it very much. My son touched a koala for the first time, it was beautiful. Now we’re spending some days visiting Sydney and on Friday we fly to Adelaide (for the start of the Tour Down Under). There’s a bike ride on Saturday, then a presentation and dinner in the evening and on Sunday we will watch the criterium. After that we fly to Melbourne, then our last two days are back in Sydney.

BA: Did you ever race in Australia ?

BA: You’re close friends with Allan Peiper.  How did your friendship come about?

MF: Allan is one of my best friends, a great guy. The first time I really met him was Flanders in 1988. I raced for Alfa-Lum and Allan was with Panasonic. In the race I saw this guy, he’d fallen down, it was Allan. He had hurt his leg and shoulder, road rash, blood. He came back into the second bunch and we rode together and caught the first bunch. I was very impressed with his ride so a bit later I asked Allan if he would ride with me in the Trofeo Baracchi – it was a time trial in Italy, not for teams but for two riders – and he said ‘okay’. After the 1988 World Championships (which Fondriest won) Allan told his boss about the Baracchi, but he just laughed and said ‘now Fondriest has won the World Championship there’s no way he will still want to ride with you!’ But we did ride it, two times, first in 1988 when we finished fourth and 1989 when we had second place. Allan became one of my best friends. I just called him yesterday, hopefully we can meet in Adelaide.

BA: You famously won the 1988 World Championships in Ronse, Belgium in only your second year as a pro, beating riders like Kelly, Roche, Anderson and Fignon.

MF: That year the course suited me very much. In March I had been second in Milano-Sanremo. I also won a stage at Tirreno-Adriatico in an uphill sprint, and in Ronse I knew there was another uphill finish. After Milano-Sanremo Alfredo Martini (the legendary Italian coach) said ‘we have to prepare for the World Championships because this year is for you’. He was right! But of course it is the World Championships, everyone looks at their television and you have a lot of pressure. I was only 23 years old. But the race was not a problem. The big problem was after the race. Every day in the newspaper in 1988 and 1989 it was Fondriest, Fondriest, Fondriest, a lot of pressure. In the next year I won only four races and finished second 12 times. But of course I think it is better to win the World Championships one time young, than never.

I will say my best World Championships was not 1988. For me it was 1991 in Stuttgart, when (Gianni) Bugno won. I was away alone in that race, but had problems with my pedal. Was I frustrated? No, it can happen in races. But after this problem Marc Madiot caught me, we were together on the last lap. Madiot rode on the front but not strongly. I said to him ‘Why do you not ride?’ He said ‘Ah, I’m tired, I’m tired.’ But it was not true. After the race I asked him again ‘Why?’ because like me he never stood on the podium that day.

BA: Do you still talk to him about it?

MF: Yes. But still he has never given me an answer!

BA: What’s it like living as a former World Champion in Italy? It’s a very select group that has included riders like Coppi, Binda, Moser, Bettini, Cippolini.

MF: It is good. People recognise me of course, but that is the thing. You stay  World Champion for life.

But of course it is the World Championships, everyone looks at their television and you have a lot of pressure. I was only 23 years old.

BA: Looking to the future, who might be the  next Italian World Champion?

MF: We have two big riders for the stage races, Nibali and Aru. But for younger riders I think perhaps Gianni Moscon. He has only started pro this year with Team Sky. He was fourth at last year’s World Championships (U23); he actually lost his pedal in that race, on the last climb, like me! He was also second at Flanders (U23), a very good young rider. You don’t really know, but for me it could be him.

BA: You won Milano–Sanremo in 1993 on the same day your first daughter was born. Did you just keep riding straight to the hospital afterwards?

MF: (laughs) It was an amazing day. I called my wife in the morning and I thought I could go home after the race and see the baby born. But on the other end of the phone was my wife’s mother. She told me ‘Mauricio the baby is already born, everything is okay.’  I went to the start in Milano like an eagle.  I flew that day, from Milano to Sanremo!

BA: Beyond cycling what other interests  do you have?

MF: I am a skier. I do something called ski touring, I love it. It’s not cross country, in French they call it ‘randonee’. I also do mountain biking and hiking in the summer with my wife.

BA: Where is home for you these days?

MF: Cles, it is a town in the mountains where I was born.

BA: Is cycling a big part of the Fondriest family?

MF: My father, he loved cycling. But none of my children are cyclists. My son is a skier.

BA: Brad Wiggins once said he admired your elegance on the bike when he was younger. Growing up who did you admire?

MF: My first hero was Eddy Merckx. I was only young, but I remember he had this strange name. At that time it was Gimondi and Merckx, but for me it was always Merckx. And also Francesco Moser.

BA: You rode in many World Championships  but were an Olympian only once, in 1996 when you finished 37th.

MF: Atlanta was the first Olympic Games open to the pros and I retired in 1999, so it was not possible to ride any more. The Olympics are important in Italy, but less than the World Championships. I don’t really know why, but that is the way in Italy.

BA: You raced with and against some of the biggest names in cycling. Who do you remember the most?

MF: Gianni Bugno and Laurent Jalabert, they are the two. Bugno is now a good friend, but back then no. We were the same age, big rivals.

BA: What was your favourite race?

MF: Tour of Flanders first. Then Milano-Sanremo. At Sanremo I won one time, second one time. At Flanders I had  fourth place, fifth place, seventh, but  I never won.

MF: Yes, yes, but not too much, maybe once a day. It is very nice in Australia. Very good coffee here. 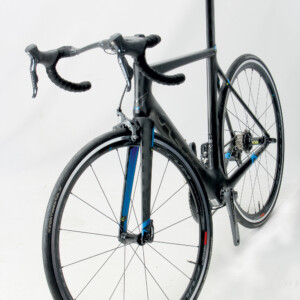