While most bike stores are content with selling bikes obtained from one of the mainstream brands, a few retailers opt to ‘go it alone’ and create their own house brand of bikes. Melbourne based store Bikes De Ver has gone down this path and the DVR3 Carbon is the flagship model from their road line-up.
In this day and age it’s not that hard for a well financed retail store to create their own range of bikes. After all we are not too far from Taiwan, the nation that has established itself as the manufacturing hub for the high-end bike market. With a trip to the Taipei Cycle Show you can source a suitable frame builder (carbon of course) and then it’s just a matter of picking a groupset to match the price point that you want to target (Ultegra, 105 or Dura-Ace if you want to get fancy). Sure, there’s the whole marketing and branding side of things, plus a sizable financial commitment if you want to make it work, but it’s a path that has been travelled by a few Aussie bike stores in the past.

Bikes De Ver sourced their carbon frame from Taiwan (and were very careful in their selection according to proprietor Peter Verleys-Donk) but the parts selection was the thing that really grabbed my attention. Rather than travelling the typical Shimano, SRAM or Campagnolo route, the DVR3 Carbon is fitted out with an eclectic range of bits. The derailleurs, shifters, brakes and most of the ancillary bits are branded ‘Race Inc’. The cranks and cassette come from KCNC; a Taiwanese boutique brand. The wheels come from Xero in Taiwan and the drivechain is linked by a Taya chain. It seems almost unbelievable but there isn’t a single Shimano, SRAM or Campag component on this bike!
While this certainly sets the DVR3 apart from the crowd, I couldn’t help thinking that they’d made ‘a very brave decision’. Let’s face it, the road market is relatively conservative, and unless a Pro Tour team uses a brand of components, it’s probably going to be met with some scepticism.

So why take such a risk? Well there are already plenty of ‘cookie cutter’ carbon bikes out there with Ultegra and creating yet another leaves them fighting a simple price point battle. Besides, De Ver sees far greater potential in dealing with the manufacturer that makes their Race Inc parts. The gear system is produced by a Taiwanese company called Microshift; they are not a multi-national juggernaut so there is actually an opportunity to guide the development of their Race Inc parts. De Ver sponsors a number of top junior riders and the feedback netted through racing is directed back to Microshift to assist with future product development. Let’s just say they have grand plans for a top-notch Aussie designed component group.

Our reviews typically glance over the component performance as we often take it for granted. We already know that a Force, Ultegra or Chorus groupset shifts and brakes very well. The Race Inc parts are an unknown quantity, so we’ll take a much closer look at their performance.

As with the major players, the gearshift mechanism is integrated into the brake lever. The main gear paddle (located just behind the brake lever) pulls the cable while a smaller trigger releases the cable. The main lever is easily reached from the drops as well as the hoods, while the smaller release trigger is easiest to reach while your hands are resting on the hoods. It takes some effort and forethought to reach the secondary lever while you are down on the drops. This makes up-shifting mid-sprint less intuitive but the same critique can also be levelled at the Campag Ergopower. Purely in terms of ergonomics, the Race Inc levers are in the game, although the hood profile is probably better suited to those with smaller hands, and the external gear cable routing doesn’t look as tidy as the internal routing currently offered by the big name brands.

In terms of shifting action, the gears lack the light and soft feel provided by the mainstream competition. When down shifting on the rear cassette, much of the lever movement is used in taking up play within the shift mechanism. When the lever finally starts to pull on the cable, the action gets quite heavy and requires some finger effort to complete the shift. There is no denying that the system works, and it did shift reliably, but the Shimano, SRAM and Campagnolo gear systems do seem to offer a more refined feel.

The KCNC rear cassette was also a factor. While the teeth had some profiling to assist with shifting under load, it was fairly minimal and not particularly effective. Again the chain always popped into the desired gear, but it did so with more noise than other systems. Shifting under heavy load was possible but it didn’t feel like you were doing the chain or cassette any favours. It is worth noting that swapping to a Shimano HyperGlide 10 speed cassette made a huge improvement to the shifting feel.

In the not too distant future, Microshift will have a new more upmarket component level on offer with more roomy brake hoods, internal cabling and a wider front derailleur cage amongst other things. It should find its way into the De Ver line-up with current Race Inc components being featured on lower price point models.

Aside from the mediocre shifting performance, the unique blend of parts has some real strong points. The parts are exceptionally light with smooth rolling bearings and good function. Take the cranks for example, made by KCNC they use an oversized scandium alloy axle with twin-hollow machined arms. At 680g (inc. BB) they are almost 100g lighter than the top of the line offerings from Shimano and SRAM. What’s more, they also felt surprisingly stiff and solid—my only gripe would be with the lack of ankle clearance offered by their squarish profile.

Weight wise, the rear cassette is another highlight. The main cogs are machined in two pieces from 7000 series alloy which has a surface treatment to provide slightly better wear characteristics than a straight alloy cogset (although it’s still unlikely to last as long as a steel cassette). The two smallest cogs are titanium and the entire 12/27 cassette tipped the scales at just 150g—that’s around 50g lighter than the equivalent Dura-Ace cassette.

At 1,520g (the manufacturer claims 1,430g) the Xero Airys are surprisingly light for a deep profile alloy wheelset, while the Race Inc branded brakes come in at 200g for a pair of callipers—approximately 80-90g less than Campy Record and Dura-Ace. I have used these brakes before (under a different brand name) and have to say that the orange coloured pads fitted to the test bike made a marked improvement to the stopping power—the Race Inc brakes worked surprisingly well.

Parts aside, the key to any bike is the frame. The DVR3 Carbon is light, at 1,050g for a bare frame, and comes with a range of very current design features. It has an oversized and tapered head tube that goes from 1 1/8 inch at the top up to 1 1/4 at the lower bearing race. The matching fork uses full carbon construction with carbon tips that are protected from clamping force by alloy inserts. At 350g the fork is very light as well. Internal brake cable routing provides a clean appearance and the frame design incorporates some nice curves and interesting tube profiles. I’m told they tested numerous frames before settling on this one and the factory also produces for some very well known and large brands.

Classic road geometry means the De Ver is stable enough on the descents without sending you to sleep. Steering around the bunch is a no-brainer and the bike feels ‘just right’ for a performance oriented racer. The frame offers good lateral stiffness for precise steering and efficient pedalling response.

De Ver offers the bike in four sizes; 50, 54, 56 and 58cm. The styling is best described as semi-compact (best to base your sizing decision on the effective top tube length) and the head tube isn’t overly tall, so the DVR3 puts you in more of a low and racy position unless you stack up the headset spacers.

The featherweight components and sensibly light frame tally up to produce a 6.7kg bike (without pedals). That’s pretty damn good for the $5,699 asking price. Most of the sub-seven-kilo superbikes that we see are in the $7,000-$10,000 price bracket. The low weight combines with the lateral rigidity to make the DVR3 a capable climber with good responsiveness out of the corners. While it does have its shortcomings in the refinement and feel of the gear shifters, the rest of the package performs admirably. De Ver has created a really unique bike that can perform at a very high level. With feedback from our home grown racers, it will be interesting to see how the Race Inc parts develop in the future—the potential is certainly there for a real pro-level race machine. 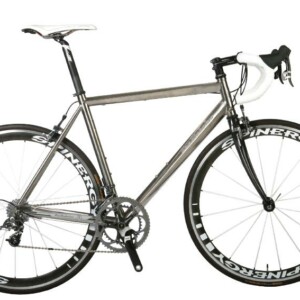