The invincible Tom Dumoulin retains the pink jersey of the Giro d’Italia after another exciting stage of racing in northern Italy.

Frenchman Pierre Rolland of Cannondale-Drapac put an end to a long drought as he rolled out to claim a solo victory on Stage 17 – he made his break from the start, managing to hold the peloton at bay for the day.

“I woke up at 5am yesterday because I was very excited ahead of the Stelvio stage,” said Rolland after his victory.

‘I Love The History Of My Sport’

“This is my reason for being a cyclist, I love the history of my sport: this is the 100th Giro d’Italia. I love the great stages like yesterday’s. Unfortunately I had a bad day and I wondered if the good form I had at the beginning of the Giro was on the down but it wasn’t the case.”

“Today, I felt great. I expected to perform yesterday or tomorrow but I decided to ride today as if there wasn’t any race tomorrow. Everyone was tired from the Stelvio stage. It was one of the hardest I’ve ever done. It was a question of courage today. Last winter I went to Colorado to discuss my season with Jonathan Vaughters, my team manager who is also my coach now, and we decided that I’d do the Giro and the Tour for stage wins. This is the kind of cycling that I truly like, more than racing for GC, which is stressful and doesn’t leave many opportunities to enjoy the racing. This sport is too hard for not having fun doing it. I enjoyed cycling a lot today!”

Ahead of yet another challenging stage tomorrow, and reflecting on his infamous natural break on the Stelvio, overall race leader Tom Dumoulin, said he “tried not to be busy with how big the news of my troubles yesterday is in The Netherlands.”

“I felt a bit insecure this morning – I was a little bit worried but I was completely fine during the whole stage,” said Dumoulin.

“I knew it was a very long way from the second climb till the finish. I would have been very surprised if any GC rider tried to go from far out. Bahrain-Merida tried at the start, they did a good job because we had to work more than we hoped for.”

Dumoulin Offers Quote Of The Day

After a remarkable run in the pink jersey, the Giant Sunweb rider knows full-well the challenges that lay ahead.

“There could be attacks from the start tomorrow, we have to be ready for everything,” he said after last night’s stage.
“I’m not here to make history for shitting in the bushes, I’m here to write history for taking the pink jersey to Milan.” 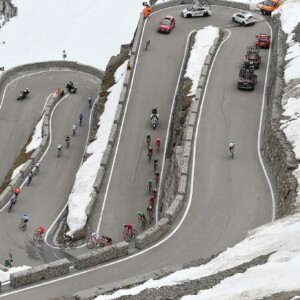 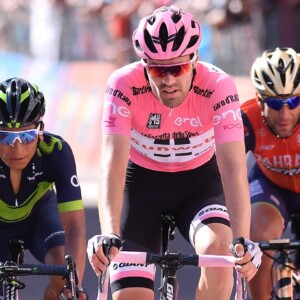