Search
Menu
Search
Normally when we conduct getting to know columns we can be in one of two places. Either at a race where most riders are pressed for time or if we’re really lucky, somewhere casual where the rider is relaxed and can give thought to the answers. This one was a bit unusual however, because I’d organised to have breakfast with Graeme near his home in Cronulla. As you can see from the picture he was feeling fairly relaxed but had a training ride planned with Chris (CJ) Sutton and Matthew White. This gave me the opportunity to conduct a Getting to Know with CJ as well. However, while doing this, Graeme kept cutting in and suggesting answers, so I thought it might be better to just put the two together. You’ll see Graeme on his own in the first one and then with CJ in the second. So what are Graeme Brown and Chris Sutton like? Well, there’s a saying in Sydney that goes, “You can take the boy out of the Shire, but you can’t take the Shire out of the boy.” And these are Shire boys through and through. There were plenty of laughs and Graeme was obviously missing his food. Hopefully both guys go well this year as they’re both in the next line to step up. Good luck this season fellas.
Getting to Know: Graeme Brown 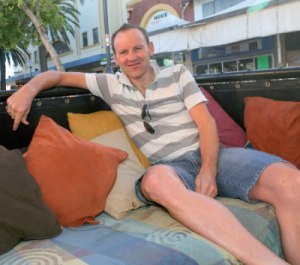 What is your earliest memory?
Sometimes I don’t know if they’re memories or not. I can’t go back very far – I think because I’m not sure if they’re memories or just memories of photos. I can definitely remember the 1990 BMX World Cup.
Do you have a motto for life?
Go hard or go home.
What did you eat for dinner last night and who cooked it? Steak and salad. My wife Hayley cooked it.
What would you choose for your last meal?
Chicken Kiev with baked vegetables.
If you could be a famous person from history, who would it be and why?
I’m not much on history. I like more modern things. I think I’d be Lance Armstrong.
What has been the best movie you’ve seen recently and why?
I like the Ocean Eleven series. Any of them because I keep watching them.
What was the last book you read?
One of Jeremey Clarkson’s books. I think it was the one with the rabbit on the front. I can’t remember the title. I reckon all his books are unreal.
If you were stuck on a desert island with you and a cd player, which three cds would you take.
Hmmm…Ministry of Sound. One of the Chillout sessions because you’d need to chillout. Maybe not one of the fast beat ones and not one of the anthems because you’d have no one to party with. No Coldplay or Robbie Williams because you’d get depressed. Maybe some Pete Murray to give you a lift without winding you up and Kylie Minogue for the visual effects.
What really grinds your gears?
GB Taxes. Taxes and death.
Complete the following sentence, “I really wish I hadn’t…
…hooked a lot of people. Because then you get a bad reputation which is hard to get rid of.
What’s your biggest indulgence over the past 12 months?
Pure Blonde Beer.
Do you own a suit that you paid for?
Yes, I’ve got two Hugo Boss suits.
What is your favourite sport outside cycling?
Golf and cricket. The cricket last night was fantastic. I sat up and watched it even though it was in Perth.
Your favourite training route anywhere in the world?
I’ve got this one ride near Pistoia in Tuscany when I used to live near Brett Lancaster. We’ve only done it twice. It’s about seven hours long and about 6000 metres or something ridiculous like that of climbing and every time we say, “Oh, we’ve got to go and do that ride again.” It’s just passes and passes all day. Even though I’m not a climber I don’t dislike it. I know I need to do it. And I like going down the other side.
If you weren’t a cyclist, what would be your ideal job?
Before I took up cycling I studied travel hospitality so I might have ended up in that. I’m glad I didn’t.
Where do you think you’ll live when you retire?
Definitely in Australia. Maybe Dalkeith in Perth.
Do you have any pets?
No. I like golden retrievers though.
What is your favourite animal?
There’s something about kangaroos. You know, when you’re out riding and they’re just there at the side of the road. They’re pretty cool.