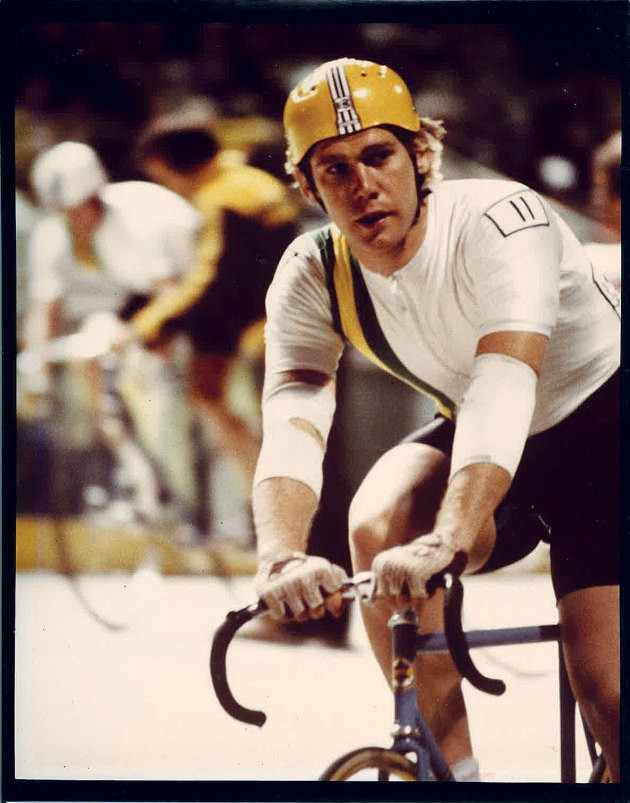 Growing up in the 1960s and 70s as the son of representative cyclist and coaching legend, Ken ‘Reggie’ Tucker, the younger Tucker began competitive cycling at the age of 12. He secured his first major victory in 1977 claiming the Australian Under 19 Sprint Championship and competed at the same year’s World Junior Track Cycling Championships in Austria, placing fifth.
The following year saw Tucker win the first of five consecutive senior Australian Sprint titles. He then ensured his place in Rockhampton sporting folklore by becoming the first person from the city to win a Commonwealth Games medal returning with both gold (Sprint) and silver (Time Trial) from the 1978 Edmonton Games alongside team-mates including Gary and Shane Sutton, Kevin Nichols and a 19-year old Phil Anderson.

During the 1978 time trial a BBC Radio commentator reportedly declared Tucker had such poor technique and handling skills he had no hope. Shortly after the young Queenslander crossed the line having set a new Commonwealth Record.
To commemorate Tucker’s achievements in Canada, the Rockhampton Mayor Pilbeam announced a new outdoor track would be built in his honour, a replica of the track in Edmonton. After numerous delays and financial troubles the Kenrick Tucker Velodrome was officially opened by Sir Hubert Opperman in March 1983.

Racing as an amateur Tucker worked full-time throughout his cycling career. As he explained in an interview with The Courier Mail newspaper in July 2014, “You’d get up early and go to training and then go to work, leave work, go to training, come home in the dark and do it all again the next day. My boss let me go for competitions but it was sort of frowned upon. Now they would have made a big deal of it and used it as positive publicity, but it was different then.”

One of Tucker’s more controversial moments came at the highly-politicised Moscow 1980 Olympic Games when, along with a number of other athletes, he defied IOC protocols and the instructions of team officials to wave an Australian flag during the opening ceremony. As trivial as it seems today, there were calls from some quarters for Tucker to be sent home in disgrace, but he remained in Moscow making the quarter-finals in the Sprint and finishing 10th in the 1,000m Time Trial. In December 1981 Tucker was again enveloped in controversy as he and several other amateurs were confronted by local police – and threatened with suspension – after refusing to take part in a race in Noumea when organisers bowed to the pressure of professional riders including Italian Franceso Moser to allow the use of outlawed hand slings. No suspension was ever recorded; just as well as there were fears Tucker could have missed selection for the 1982 Commonwealth Games – the event that would deliver undoubtedly one of his crowning achievements.

Despite suffering from glandular fever, Tucker successfully defended his Commonwealth sprint title in 1982 before a frenzied home crowd at Brisbane’s Chandler Velodrome. He was forced to withdraw from the time trial at the same games due to illness and his health continued to plague him well into 1983. By early 1984 Tucker was back to fitness and regained his National Sprint crown at the Canterbury Velodrome in Sydney, defeating Steven Pate.

“There were times over the past 12 months when I seriously considered giving it all away,” a relieved Tucker told journalists after the National Sprint final. Not without some irony Tucker would end that triumphant day in St George Hospital, after injuring his shoulder in a crash during the warm up for the final night session.

Despite a new health setback Tucker still qualified for his second Olympic Games in Los Angeles and travelled to the USA in July 1984 where he would again make the quarter-finals of his pet event, the Sprint. Two years later he retired from elite cycling after missing selection for the 1986 Commonwealth Games team and by his own admission found the transition a challenging one. At different times Tucker worked as a car salesman, a motor mechanic and even spent a year as a nightclub bouncer before enjoying a successful firefighting career for Air Services Australia. He continued to ride periodically and in 1994 won two World Masters Championships, again at the Chandler Velodrome in Brisbane.

From day one Tucker was trained by his father Ken who, amongst other fine riders, played a significant role in guiding the early career of Anna Meares. In a poetic twist to the Tucker dynasty, Ken now trains Kenrick’s daughters Brooke and Lara. Both are already National Junior medalists with Brooke qualifying for her first World Championship team earlier this year when she won the 2015 Under 19 Australian women’s sprint title. Younger sister Lara also became the fourth member of the Tucker family to win the historic Rockhampton Cup on Wheels in 2014.

“I’m certainly happy with what I achieved,” Tucker reflected in 2014. “My aim was to win Olympic gold, which I didn’t do, but if you don’t have a go you’ll never achieve anything. My cycling career gave me the confidence to do other things in life. The hard work was definitely all worth it … I’m so glad I did it.”

Tucker was one of the inaugural inductees into the Queensland Sport Hall of Fame in 2009 alongside sporting legends including Allan Border, Susie O’Neill, Greg Norman, Wayne Bennett and Dick Johnson. Now 56, he currently has a coaching role with Cycling Queensland and continues to live in Rockhampton with his wife of 30 years, Karen.