Label reading is one of the most useful nutrition skills we can have – the mandatory (and sometimes tiny), nutritional panels featured on all packaged foods in Australia con­tain vital information including details on the foods’ ingredients, kilo joule, carbohydrate and fat contents, which enable you to make informed decisions about what you will and will not put into your mouth.

While nutrition labels may be confusing, the good news is that you really only need know a few basics to make a balanced and well informed decision on the nutritional quality of the foods you are buying.
What the Terms on a Label Mean
Total Energy
Refers to how many kilojoules (and calories-remember 1 calorie = 4.2 kilojoules) is in the food. The average adult female will need roughly 6000 kJ each day and a male 8000kJ. On average cyclists can add between 800-1500kJ for every hour they spend on the bike.
Protein
Refers to the amount of protein the food contains. Protein is used in the body for muscle growth and repair and is likely to help keep us full. Animal based foods including meat, eggs, dairy foods as well as nuts will contain larger amounts of protein than non animal foods such as bread, biscuits, breakfast cereal, snack foods and oils. Protein recommendations differ between indi­viduals but an average adult requires 1g of protein per kilogram of body weight as a minimum in order to receive all the key nutrients they need. There is also some evidence to show that athletes may benefit from slightly higher amounts than this to support optimal immune functioning and recovery.
Carbohydrate
Refers to the total amount of carbo­hydrate in the food, including sugars. Carbohydrate is the main source of fuel for the muscles. One slice of bread or one piece of fruit = approximately 15g of total carbohydrate. It is difficult to es­timate exactly how much carbohydrate an individual requires as requirements differ depending on age, training load and gender. Consuming less than 100g of total carbohydrate each day though will mean that muscle mass is being broken down to be used as fuel, compro­mising metabolic rate.
Sugars
This refers to the amount of both naturally occurring and added sugars in the product. For this reason, products that contain dried fruit may be dispro­portionately high.
Total Fat
Refers to the total amount of all types of fat in the food; saturated, trans, monounsaturated and polyunsaturated. The average adult female will need just 40-60 total fat each day. Food labels must include saturated fat but may also include the other components such as trans, polyunsaturated and monounsatu­rated fat.
Saturated Fat
This is the type of fat that increases blood cholesterol in the body and needs to be kept low. Aim for less than three grams of saturated fat per 100g.
Dietary Fibre
Bread, breakfast cereals and other plant based foods may also include the dietary fibre level of the product. Adults require at least 30g of total fibre each day.
Sodium
Describes the amount of salt in the product. Adults need to aim for less than 2000mg of sodium in their diet each day. Packaged foods including noodles and savory snacks may contain up to 1000mg of sodium per serve. 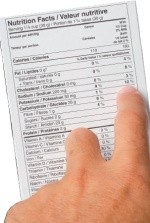