Correction: In our May June issue we ran a bike test on the Avanti Cadent Team. In the review we said the bike came with a compact crankset. Strange error to make we agree. The bike actually comes standard with 53/39 Dura Ace cranks fitted. We apologise for any confusion created. 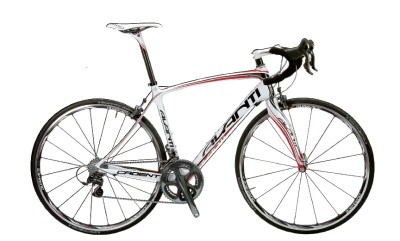 My first encounter with Avanti bikes was when asked to review their Quantum 2.0 in April 2008. The bike review was published in the May June 2008 edition of Bicycling Australia and briefly covered Avanti’s history and range. In these past two years Avanti Bicycles have introduced the Cadent into their range of road race bikes to cater for a market segment that wanted a race endurance frame with a more comfortable feel.

The Cadent has been designed on Avanti’s Quantum race performance frame with slightly more relaxed geometry, while keeping the main features of their Quantum.

This more relaxed geometry is achieved with a longer head tube and chainstays. A shallower head angle and slightly greater fork offset. What does this mean to the potentially new buyer? The longer head tube will allow the handle bars to be positioned 25mm higher than the racing specific Quantum frame. This will appeal to the less flexible riders who would normally have to stack up the head stem until it almost resembles a seat post or buy a larger frame size and reduce the stem length to compensate for the longer top tube.

The longer chainstays are coupled with Avanti’s curved seatstays, which look very spindly with dimensions of 11mm by 14mm wide. While these stays have a spindly look they certainly don’t give away any noticeable lateral flex. They do however give a very comfortable ride by flexing horizontally and absorbing more of the road bumps and vibration. The shallower 72.5 degree head angle and greater fork offset help the Cadent to steer more smoothly than the more aggressive 73.5 degree head angle of the Quantum Team frame. These front end features help to transmit less road shock and vibrations through to the handlebars. More transmitted shock would result in tighter muscles in the arms, shoulder and neck.

The Cadent Team and the Quantum Team frames share more of their high performance features than just the striking paint work. The head tube and fork steerer are tapered from top to bottom. This tapering of the head tube and steerer enables the use of larger 1.5” lower and 1.1/8” upper integrated head set bearings. The larger lower bearing handles the frontal load better and also provides for more material and strength at this junction of the head tube, down tube and fork crown. This results in improved strength while reducing the flex at the top of the fork. The carbon fork is Avanti’s E5 which comes with a carbon steerer and integrated head set. The fork blades are fairly broad with an attractive sweeping curve.

The oversized down tube is nicely profiled for aerodynamics and strength. The down tube thickens at the base where it blends into an 86mm wide BB shell. This wide and also bigger BB shell houses the new generation press fit BB. Press fit BB shells allow the overall width of the BB or Q Factor to be reduced from the previous external bearings if required. The other benefit in having a bigger, wider BB shell is that it enables the down tube, seat tube and chain stays to be bigger and stronger at this very important junction. This increase in material reduces the flex or swing of the BB area while under load.

The Avanti Cadent has a modular monocoque construction using C40 and C30 carbon fibre. The front triangle is made up as one unit separately from the rear triangle. The two triangles are then fused together to create a one-piece frame.

The Cadent Team frame is finished off in white duco contrasted with red and black decals. The Team edition is the top of the Cadent range and is equipped with Dura Ace 7900 components and wheel set. Avanti have their own brand of ‘Zero’ finishing components such as handlebars, handlebar extensions and seat post. These were stylishly finished in a gloss white with red and black pin stripping which complemented the bike very well. The 42cm handle bars and 11cm handlebar stem were well suited to the 56.5cm frame on trial.

The Cadent Team bike comes with a 39/53 Dura Ace crankset as standard and the  172.5mm length cranks would suit most riders fitting the 56.5cm frame.

This was my first opportunity to test Shimano’s 7900 Dura Ace group set. The Dura Ace 7900 group set has some great features over its predecessor the 7800. The most noticeable of these is the brake/STI levers. The carbon fibre levers have an adjustable reach, perfect for riders with smaller hands like ladies. The gear cables are now routed under the handlebar tape with the brake cables instead of looping straight out of the levers to the down tube. This has a cleaner look with better aerodynamics. The right hand lever controlling the rear derailleur operated flawlessly even while under hill climbing pressure. This is more than I can say for the left hand lever. Changing was smooth but the front derailleur required a lot more force to move up from the small to large chainring than the 7800 10 speed levers. This was especially noticeable when moving to the outer limit. I had experienced this before with one of the girls in our Academy who was unable to push the lever to its limit. Changing down also felt stiff and difficult at times. The strong spring tension made the changes require quite a lot of pressure causing the lever to often over change. Changing of the rear derailleur was smooth and crisp thanks to the new unidirectional chain. The 7900 rear derailleur now has carbon inner and out plates reducing the weight and can cope with a bigger 28 tooth cog.

The Cadent test bike was fitted with Dura Ace 7850-SL wheels and shod with Continental Grand Prix 4000 tyres. While these Contis are not the lightest road tyre available at 205g they are very reliable and one of my favourites. I feel the Dura Ace 7850 wheels are one of the most under rated racing wheel sets in the market. At 1514g per pair they are light enough for most terrain while still being strong and stiff enough for most types of racing. 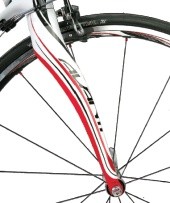 How does this newly designed bike ride? On my first ride I was impressed with the smoothness and glide that this bike delivered. It seemed to coast forever. This was more attributed to the low rolling resistance of the wheels and tires than the weight of the bike because at 7.1kg without pedals the Cadent is not a heavy bike at all. At the first little climb the bike was begging me to stand up. I stood up pulling up on the wing shaped carbon bars and the Cadent reacted quickly. My impression was how easy it was to ride out of the saddle. The relaxed front end gave a comfortable feeling that you could stand for longer. There was no twitching or need to drag the bike back on line which you sometimes get with more aggressive bikes. The higher handle bars allowed you to climb in a more upright position for longer. I was not aware of any handling delays until I actually concentrated on throwing the Cadent in and out of some tight corners. This bike handled the tight lines in a predictable fashion. There was no twitching but the Cadent went exactly where you pointed it. It’s definitely not a Criterium frame but is not intended to be. It is designed to be an endurance frame best suited over long rides. Upon saying this, it’s not an armchair ride either. When needed the Cadent reacted quickly either to avoid a pothole or accelerate forward. The thin curved seat stays really did absorb a lot of the road shock while still retaining its rigidity when I had a full powered sprint. I enjoyed giving the pedals a good kick and feeling the bike respond forward instead of the BB flexing between each stroke.

The Cadent Team is a very well suited bike for any rider who wants a bike that races aggressively but does not have the flexibility of a 19 year old. It is more upright and comfortable but still suited to some hard racing. The 7900 Dura Ace components finish off the Cadent frame into a great competitive bike.

A great performing bike with a comfortable endurance design suitable for competitive racing.

This, along with the Quantum, is Avanti’s top bike only exceeded by the Team Di2 which is fitted with Shimano’s new electric gear system, so no expense has been spared.

The Avanti Cadent Team is a valuable addition to their range, suitable for riders with slightly less flexibility who want a top class bike with comfortable performance.