Sponsors in cycling are much like people in revolving doors. Some­times they continue with the rota­tion of the door for two, three or seven revolutions and leave feeling satisfied and slightly dizzy. Other times they sim­ply just want to get out of the confined, claustrophobic space as soon as the first revolution is over. The peloton is a continually changing sea of colours and logos as sponsors move in and out of this revolving door, unfortunately for female cycling, 2010 saw more spon­sors gasping for fresh air than looking eagerly ahead to the next revolution.

No fewer than five professional wom­en’s teams found themselves packing kit into boxes to be sealed and stored away for good at the end of the 2009 season, and already five major races (including two tours), have been crossed off the already reduced racing calendar. In a sport which seemed to be finally making
inroads with the launch of super teams HTC-Columbia (formally T-Mobile), in 2007 and Cervélo Test Team in 2008, the loss of major teams like the Swiss Bigla squad, along with the cancellation of major races such as the Montreal and Nürnberger World Cups from the cal­endar signals a sport in decline. In 2010 the female cycling community seems to be taking huge steps in the wrong direc­tion. 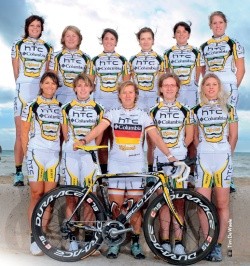 Eva Lutz, who recently retired from the sport after the collapse of her Ger­man Equipe Nürnberger Versicherung team in December, said pessimistically, “Women’s cycling can’t be saved in the next few years. There is too little atten­tion paid to it to notice that it is going under.”
The news that one of the biggest and longest running female cycling teams, Lutz’s Equipe Nürnberger Versicherung team, would cease to exist as of January 2010 after a messy and extremely late exit by the new team sponsor Skyter- Shipping was devastating. Thirteen riders found themselves without a team only weeks out from the official start of the season, including Olympic and ex- World Champion Nicole Cook. Former world champions, current world cham­pionship medallists, world cup winners, and a host of other talented riders were left without a team for the 2010 season. The situation epitomizes the current malaise within female cycling.
A letter to the editor posted on Velonews.com recently may provide some clue to why women’s cycling has found itself where it is. The correspond­ent, a possibly deluded and most likely newly added name to the hit list of the Global Fund for Women, wrote in to the online cycling journal citing that he didn’t “mean to be a jerk or a sexist” but the site should “stop trying to trick me into clicking on articles about women’s cycling and stop putting women’s cycling news in your overall road headlines. Trust me, your target audience doesn’t particularly care.”
So the question is how do we attract this ‘target audience’ to women’s cy­cling? The leading body of international cycling, the Union Cycliste International, seems to be asking the same thing. The first International Women’s Cycling Congress being held in Varese, Italy before the first of the nine race World Cup series is certain to try and address and rectify some of the issues currently gripping women’s cycling. The organiser of the congress, Davide Bardelli said the coming together of team managers, ath­letes, journalists, and civil and support­ive authorities along with senior UCI officials will be a historic and important moment in women’s cycling that is a step in the right direction. The congress will “reflect on the present and future of ‘pink cycling’ and will draw new scenarios and approaches for women’s cycling while promoting its visibility,” Bardelli said.
One of the issues certain to be discussed at the upcoming congress is the lack of exposure and coverage female cycling receives internationally in comparison to male cycling. Quite simply, female cycling just doesn’t have the luxury of that three week extrava­ganza held every year in July which is broadcast to more than 185 countries on 118 networks and as a result sponsors seem to be less inclined to invest in the sport. Bob Stapleton, owner of ProTour outfit HTC-Columbia and supporter of female cycling made it clear that the reason for this lack of exposure does not lie in the fact that women’s racing is of a lesser standard than the men’s when he said, “women’s cycling in general is more exciting. The races are shorter and in some respects less predictable because there are fewer teams.”

Stapleton went on to suggest that the future of female cycling lies in women’s events using men’s events as a leverage to gain more exposure and coverage for the sport, “the best thing for women’s cycling is when the races are run with the men and can get coverage time on the television along with the men,” sin­gling out the Philadelphia International Championship, one of the biggest and most prestigious races held in North America as a leader for pushing women’s cycling to the forefront of the public eye. “The women will receive equal cover­age time as the men in Philadelphia; both races will get two hours coverage time. It’s something that needs to happen more.”

More major female races need to be combined with male races, as is the case with spring classics such as Fleche Wal­lone and the Tour of Flanders as well as the Philadelphia classic to boost the awareness and following of the sport. Whether this means adding more racing to the female calendar or simply moving pre-existing races to align with men’s races, it is definitely an issue that needs to be addressed if women’s cycling is expected to recover from its current predicament and move forward. The launch of female teams in conjunction with male teams, such as the Cervélo Test Team and HTC-Columbia, also helps to provide added security to the female peloton. More than one person has suggested that the UCI should look to implement a ruling where men’s professional teams with budgets over a certain threshold should have a women’s team attached to them. Obvi­ously this would involve an enormous amount of planning and negotiation but it is something that is definitely worth some thought. 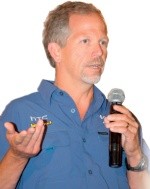 Before you let the squeal of disap­proval echo across the living room, consider this; the rumoured £30 million ($AUD50 million) budget of David Brailsford’s British dream team, Team Sky, is enough to sponsor a major women’s team 60 times over. Had a few less luxuries been installed on the now infamous Team Sky bus, Nicole Cook and her other Equipe Nürn­berger Versicherung team-mates may have still had a team in 2010.
It is some consola­tion to know that even without the helping hand of the sport’s leading bodies there does seem to be some interest among the ProTour community in launching sister teams. “Teams like Rabobank, Saxo Bank, even Sky, have all come to us asking what is involved in running a women’s team,” Stapleton said. “The cost of running a women’s team is a bargain. The cost of entry into the peloton for a women’s team compared to a men’s is minute.” For female cycling, all we can do is wait and hope that these talks come to frui­tion.
Riding home from a race recently in America my team-mates and I were engaged in conversation with a mid­dle aged man stopped at traffic lights. “Where are you girls riding to?”
“Just home.”
“Any more racing on?”
“There’s one tomorrow actually, down­town. There is some men’s racing also.”
“Nah, I don’t wanna watch men’s racing. I wanna see hot chicks on bikes! Love it!”
If only more people could begin to adopt this attitude.