In his debut article, 19yo Perth-based cycling photographer Zac Williams speaks with one of our favourite pros, Luke Durbridge.

It’s been a while since this last happened for Luke Durbridge. He pulls on the green and gold bands after dominating the national TT championship. He’s ecstatic with his ride and it caps off what has been a history making weekend for him and his family. This victory in the TT comes just 36 hours after his brother-in-law, Michael Freiberg took a heart-stopping win at the national road race. That Sunday on Buninyong was one of the most exciting in recent memory and a race in which the result wasn’t certain until the last 200 metres.

Fast forward to Tuesday morning and Durbridge is powering through the TT turnaround on a record-breaking ride. He said after that he didn’t actually believe the time checks that he was receiving out on course, an indication of the humility of his character and perhaps the slight lack of faith that was left by the wayside along with the rest of the competition during that ride. Those 51 minutes herald a new beginning for the 27-year-old, who by his own admission has experienced a few “lean years”, nothing that has changed Michelton Scott’s unwavering support for his abilities as a domestique and now, with Mathew Hayman’s retirement, a leader for the classics.

Durbridge is one of the most exciting riders in Australia in 2019; he’s had a few seasons of bad luck with crashes and injuries but now, with a full 2018 race season under his wheels, he’s ready to step up into the big time and into the forefront of the Australian cycling public’s consciousness. He’s ringing in a new period of his career.  Durbo 2.0 starts now.
I sat down with Luke in the lobby of the Adelaide Hilton a few days before the start of the 2019 Tour Down Under for a chat and to float this concept of “Durbo 2.0” to him, one that he liked the sound of.

Bicycling Australia: A lot of people are crediting the performances of yourself and Michael Freiberg’s National’s wins to the huge offseason rides you boys do back in Perth, run me through what your offseason looks like.

Durbo: In a nutshell, I finish end of September, I have all of October off and travel around Europe with my wife. We drink booze, eat food, I pretty much get as fat as possible. And then early November I come back to Perth and that’s when the hard work starts. We have a really good training environment, I live in the city, we meet at the coffee shop every day, might be a group of five or six of us and we go out in the hills and ride hard and train hard. [This group of six Luke mentions consists of Cameron Meyer, Micael Freiberg, Pro Triathlete Matt Burton, Jai Hindley and any other local A-graders who have made the grade in the eyes of this elite training group.]

In 30 minutes on the bikepath, you’re out in the climbs and nobody is out there, turn around and same thing, so you can avoid all the traffic which is great. But what would happen as a first and second year pro is that I’d come back to Perth and be so excited and motivated to ride my bike that I’d train so hard over the summer which is so easy to do and as a result, come to January and be flying, 2012 and 2013 I was national champion, so it works—but then by March I’m on my knees, I’ve done too much work, I’ve peaked, I’m at the classics and I’m pretty much hating life.

So, my coach Ben Day tackled this problem of me training too hard in the offseason. Now I no longer do criteriums in the offseason, I don’t really do bunch rides, except for “the one”, so I don’t do that intensity, I just do the length. I do a lot of Ks, and in the last few years I’ve still rocked up to nationals with good form but its all been off of work in zone 2 with the idea that I will eventually peak for March and April in the classics season when it really counts.
You have to still work hard, everyone who wins the classics is still putting in the work in November and December but it’s a different sort of stress mentally, and on your body and your mind.

BA: You mention the classics and the last few years you have had some bad luck, especially at Roubaix, what happened there?

Durbo: Yeah Roubaix can be a bit cruel like that.  I wasn’t even on a cobbles section, I was just riding along and there was just this manhole and I rode across it, dropped down, my saddle broke.  But I also made a bad call and decided to get my bike changed at a really bad moment.

You know, I probably could have ridden out  of the saddle for a couple more kilometres,  until there was a little bit of a lull, but instead,  I pulled over, changed my bike and never got back on. But that’s the nature of the beast, you learn these things, that’s one thing I’ve noticed about Roubaix is that it’s just a race where you need to take everything you learn every year and it’slike a puzzle where you keep putting the pieces together until it works.

You know, Boonen’s a freak, he probably won it at 22 years old, but you see guys taking time to win it—Greg took a while to win it and Dekegenkolb took a while, and these sorts of guys, they work out piece by piece how to win the race.

BA: In the last few years there seems to be more and more guys who can win Roubaix and at the same time, fewer victories where one guy runs away with the race early on. With the exception  of Sagan last year do you see the racing getting much closer in competitiveness?

Durbo: There really isn’t a massive gap anymore: with all the training and the monitoring of the riders and the marginal gains, the entire world tour is getting more and more competitive and especially big races like Roubaix. There’s probably 15-20 guys who can win the race—before there might have only been five guys who could really win it, but now there’s all these guys on the start line who are a genuine chance. So that’s pretty cool and I’m hoping to get into that group of guys that can win Roubaix. I love that race and I love the Tour of Flanders and they’re my two biggest focuses of the year.

BA: Ok, so on that, and with Mathew Hayman retiring after this TDU—someone who has been a bit of a mentor to you—how do you see your role in the team with his departure?

Durbo: It is sad to see Matty go, but I think that know he can be even more influential in his DS role. He’s one of the guys who have had a massive impact on my career and he was one of the guys who I’ve always looked up to in the classics races. He’s an Aussie that treats and loves the classics like I do. I really love his enthusiasm for those races because there aren’t many Aussies who care so much about those races because we weren’t really brought up on them.

You really do just have to get over to Belgium and realise that this is the place for me. You know, most people get over to Belgium and it really isn’t the place for ya, it’s not as glamorous as you think. They are really hard races and it still took me probably four years to learn to love them because they’re cruel races. You know most times you love them and they don’t love you back.

BA: So as someone who has been a keen observer of your career and with the result at the TT last week and the retirement of Matt Hayman, is this the start of a bit of a ‘Durbo 2.0’?

Durbo: Yeah I think so, I think when I first came on the scene I was winning a lot of races, and there was a lot of confusion of where I wanted to go. Was it to lose weight and try and win one-week stage races? Because I could TT, but I could also climb for a big guy—if I lost heaps of weight then you know, who knows what you could do. But you know, there was also the classics element pulling me away because it was such a love for me and then again, the TT element and the domestique role element.

Also, my road race ability wasn’t that great: I could TT and that’s why I signed pro, but my ability to read a race wasn’t there. I used so much energy because I didn’t know what was going on. I turned pro off 20 days racing, because I was a ‘trackie’, and then I go into my first season and it was 60 days.
I try a lot of things and I’m a guy who wants to do what’s right—where I should save that energy and just do the basics right because that’s what matter. And aside from a few silly dietary mistakes I’ve made throughout my career, until last year I haven’t really had a full season of racing for a while.

You know, I’ve had some pretty decent accidents: there was the TT in Dusseldorf, and the road Nats crash last year, but luckily I only missed Down Under because of that and It meant I could get a full season under my belt for the first time in two years, something I think I’m benefitting from now. But yeah, I like the idea of Durbo 2.0, in a positive sense and I think what happened on the weekend, beating Rohan, the time I did on that course was one of the fastest on that course and having Rohan there sort of legitimised that performance for me. I’m excited about that and who knows, if I keep doing what I’m doing we’ll see where I get.

BA: At the 2019 Nationals, racing alongside your brother-in-law and your good friend and teammate Cam Meyer, what was that whole day like?

Durbo: That fourth place doesn’t mean anything to me personally to me but it was more that the fourth just happened from doing my job for Cameron. You know he’s another great mate of mine and training partner and I was really upset for him and the team but I just couldn’t not be really happy for Michael. We do train together every day and it really was just something that dreams are made of—just a guy that doesn’t get paid to ride his bike, and he’s designed a wheel to change the way he can perform. Michael’s engine was never built for getting around the road nationals and he’s changed his makeup to do that and that takes a lot of time and effort, you see it every day behind the scenes, and when it came out it was just what dreams are made of. 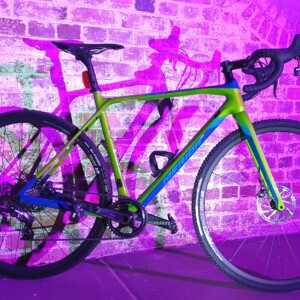