Another Photo Finish at the Sun Valley 500

Streakers and strippers have clashed at the finish line of the Sun Valley 500, the annual sprint-fest that marks the end of the Blue Mountains crits season. This year’s fixture could only be described as 546 yards of madness as rollicking mischief turned to mayhem. To understand what unfolded on and off the bici, one needs an appreciation of the long history of bad blood between local streakers and strippers.

In 1956 the Springwood Camera Club picked up the gig of documenting the Sun Valley 500 and sorting out the podium. The front wheel started to wobble just seven years later when the avant-garde rock‘n’roller Frank Zappa composed his ‘bicycle concerto’ on national television – plucking and grating the spokes with a violin bow, tapping out paradiddles on the forks, squeaking the leather seat and busting out tuba-like vibes through the handle bars. Cyclists, artists and photographers were, like, totally freaked out, and the ensuing cultural revolution led to an inevitable rift between the streak and strip photography camps of the SCC. 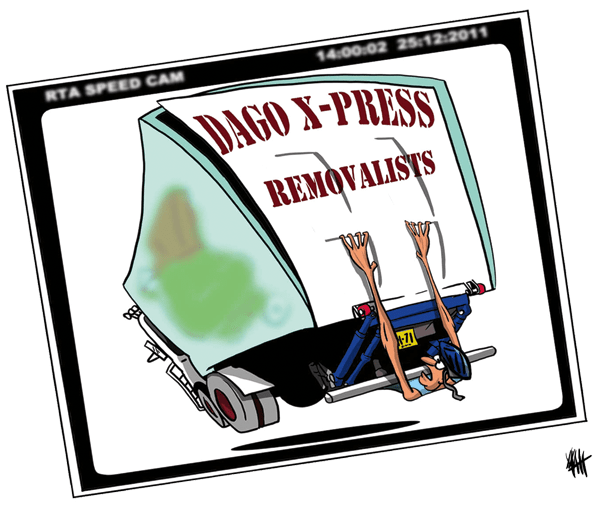 The streakers argued their psychedelic images captured the explosive spirit of the peloton’s lunge at the line. While conceding that it was impossible to identify any single rider, the lateral distortions expressed the socially constructed nature of velocity and had to be defended on artistic and philosophical grounds.

The strippers kept it simple. They upheld industry standards and were the only ones who could provide an indisputable record of the final order of all cyclists, citing their extensive body of work from the Penrith Greyhounds as evidence.

The entire saga was formally settled about a decade ago with the installation of a speed camera on the Great Western Highway. Local cycling authorities determined that the winner would only be announced after the submission of independent photographic evidence, though they stubbornly refused to compensate any winner for the cost of the speeding ticket. To date, only three chain slappers have exceeded the 80kph required to earn a Roads and Traffic Authority happy snap, including ‘The Bull from Grimstad’ himself, Thor Hushovd.

With big things consuming his mind, Thor decided to do a bit of sightseeing in between his victory at the 2010 World Titles in Geelong and the 2011 Spring Classics. Like many a Norwegian backpacker before him, the Bull was crossing the Great Divide to spend a few nights on the couch at the Renshaw family home when he stumbled upon the Sun Valley 500. The excitable tourist spent the ceremonial ride from Hurley’s butcher shop to the overpass at Valley Heights handing around his digital camera to all and sundry trapped in the main bunch.

Sprinters are an uncomplicated lot, and the chance disclosure of a Big Merino at Goulburn by a star-struck wheelsucker almost led to a change in Thor’s travel itinerary. The Bull prides himself on reliability and his near miss with spontaneity was only averted after a text from the Renshaws reminded him that the following day would be spent at the Big Gold Panner in Kelso.

This year The Old Cranks dominated affairs from the start. K.G. ‘Cagey’ Litton, our strongest wheelman, desired nothing more than the honour of being named the most aggressive rider – an ambitious objective in an event that rarely lasts more than 45 seconds.

After unloading an endless barrage of trash-talk in the neutral zone, K.G. launched himself off the front of the peloton. Encouraged by an early lead, he attempted to surge again, mashing his pedals so hard that he tore the cleats clean off the bottom of his shoes, hucked like an amateur gymnast over the handle bars and planted his face in the bitumen by the side of the road.

It was a predictable outcome. K.G. is also known as ‘The Pope’ for the frequency with which he kisses the tarmac.

Running on adrenalin, Cagey dragged himself to his feet, began dismantling his Giant and hurled its components into the stream of advancing riders. His front Dura-Ace wheel was the first item to go, taking down the chase group. By the time I arrived upon the scene, he had taken out his Crank Brothers Multi-Tool and was pelting pieces of his groupset at the stragglers.

Only a lack of serious injury to other riders saved K.G. from immediate disqualification, though the event’s organising committee ordered him to remove all quick release mechanisms and hand over his multi-tool for the upcoming road race season.

Between Litton’s antics and the brawling streakers and strippers, it was unclear who had won the day. In addition to earning a fine selection of meats and a behind-the-scenes peek at Hurley’s handy work with the Henckels, the Sun Valley 500 champion is presented with the somewhat contentious maillot à pois – a silky, purpley-blue jersey with canary yellow polka dots that would be equally at home in the final furlong of the fifth at the Hawkesbury Races.

The aesthetically displeasing character of the garment is such that fashion conscious crank crunchers have been known to baulk at the finish line and take second place. Miguelito ‘El Dingo Loco’ de Pared suffers from neither vanity nor pride and – in a serious breach of protocol – prematurely donned the maillot à pois.

Unfortunately it was not to be. The RTA photo clearly showed him clinging to the hydraulic tailgate of the Dago X-Press interstate removalist truck.