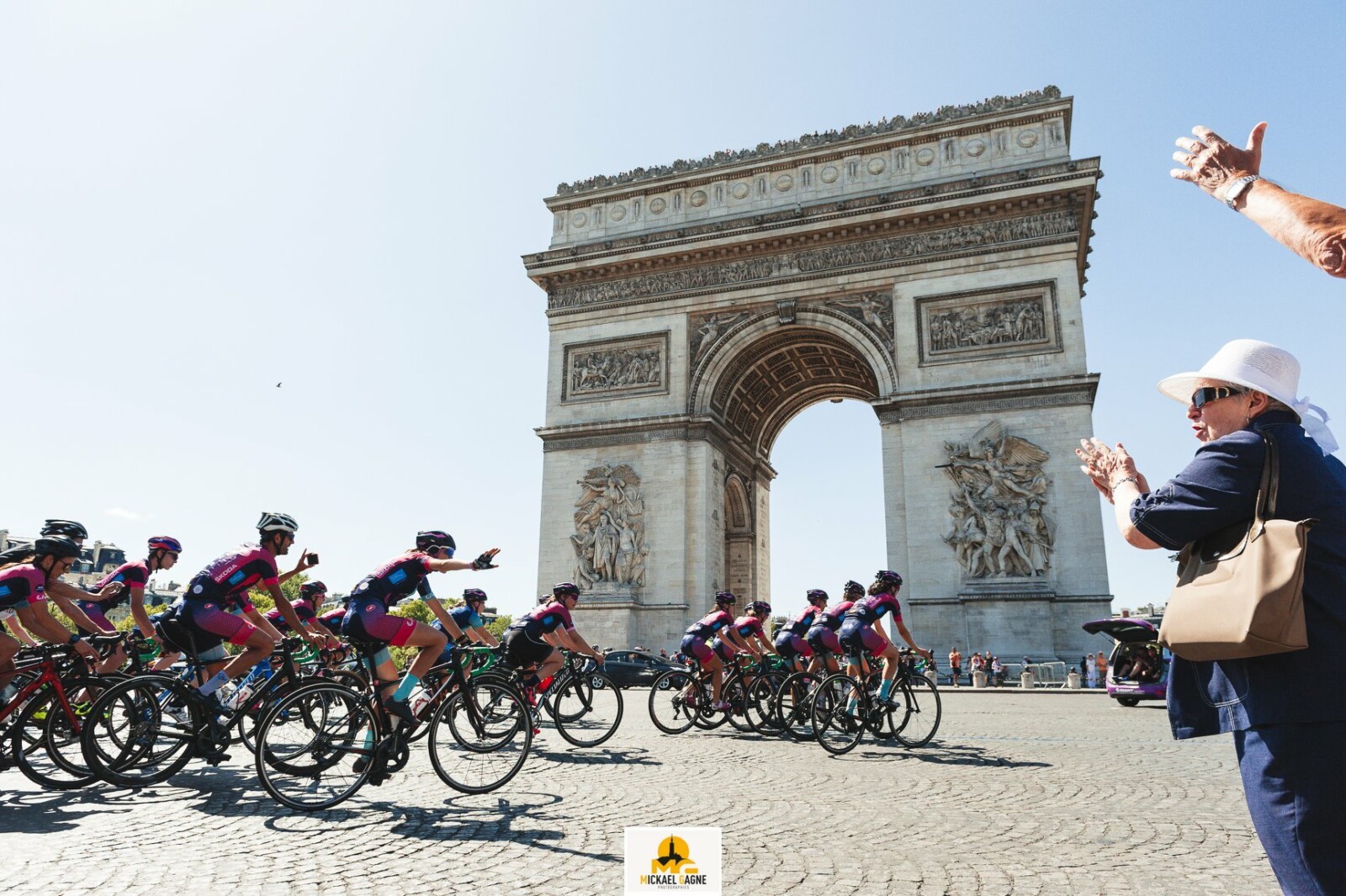 When the riders of the Tour de France crossed the finish line on the Champs-Élysées on Sunday, they were celebrated by an audience of millions. However, they were not the first peloton to reach the finish line in Paris as Stephanie Constand explains in this timely article for Bicycling Australia.

For the past three weeks, a group consisting solely of female cyclists, known as Donnons des elles au vélo, has been taking on every kilometre of the Tour de France’s twenty-one stages, one day ahead of the men’s race. Yet for these riders, there was no podium waiting for them in Paris, no yellow jersey to collect, and no prize money to bank in the team kitty. Instead, what the 13-woman strong project, now in its fourth year, was riding for is the return of the women’s Tour de France.

Tetiana Kalachova, one of this year’s participants, explains the raison d’être of the project in entirely simplistic yet unquestionably logical terms: “We want a women’s stage race with the same media coverage and the same attention as men have.”

Surely It Is Time

After more than 100 editions of ‘La Grande Boucle’, women still find no place in this iconic event. Within a race that is steeped in tradition and has historically been characterised by masculinised cultural images of heroic endurance and courageous feats of suffering, female cyclists have long been deemed an uneasy fit. To this day, it is also often contended that women would be unable to race competitively across the extended distances that are demanded by the notoriously testing parcours of the Tour.

However, similar arguments were also initially made with regards to the sport of marathon running, and women have long been competing across equal distances in road marathons without issue. It’s time that cycling does away with the questionable proposition that women would somehow be unable to handle a demanding multi-week stage race, and most certainly time to refrain from invoking such anachronistic rationale under a veneer of benevolent concern for the welfare of the weaker sex.

Almost 35 years ago, the 18-stage Tour de France Féminin was launched alongside the men’s Tour de France, yet the ambitious project enjoyed a paltry lifespan of only 5 years. In the decades since its demise, various reincarnations of the race appeared on the women’s racing calendar, however, following year upon year of inadequate finances, sponsorship debacles, and daunting organisational obstacles, the project was ultimately abandoned.

As a result, since 2009 there has been no women’s equivalent of the Tour de France in any shape or form. However, with the recent resurgence of public interest in women’s cycling, the renaissance of a women’s Tour would be both a financially viable and undoubtedly popular addition to the ASO’s flagship cycling event.

The first steps towards the establishment of an integrated women’s race came in 2014 with the inaugural edition of La Course, which was held on the cobbles of the Champs-Élysées. Yet despite the popularity of La Course among the viewing public, with last year’s edition attracting over 1 million television viewers in France alone, the ASO has declined to expand the race into a multi-stage format.

As a result, La Course still essentially remains a severely truncated and, some would argue, acutely embarrassing version of the men’s race. Even this year’s fifth edition was merely a snippet of the men’s Stage 10 and was disappointingly marked by the conspicuous absence of two key climbs, which were for some reason deemed unnecessary for the women’s event.

Yet surely in this day and age, the women’s peloton deserves much more than a curtain-raiser novelty pursuit up the slopes of the Col de la Colombière and a subsequent declaration by the ASO that the demand for a women’s race has thereby been satisfactorily met. In this respect, while still justly applauding the achievement of getting the ambitious project that is La Course off the ground, we must take care here to critically distinguish between shape-shifting and concrete progress. As it stands, in 2018, the Tour de France provided the men’s peloton with 3,351km of racing, yet allowed the women only 3.5 per cent of this, a comparatively meagre 112.5km.

Is La Course A Token Event?

We must therefore ask ourselves, is La Course in its current form merely an unfortunate continuation of the historic relegation of the women’s peloton to second-class status, as opposed to evidence of the ASO’s concrete progress towards a women’s Tour? Kathryn Bertine, one of the women who was instrumental in lobbying for the introduction of La Course four years ago, argues that the one-day event must unfortunately be classified as the former, recently describing the race as “throwing women a token.” Instead, she contends that La Course should be five to 10 days long at the least.

It is here that Donnons des elles au vélo seeks to prove a critical point. Throughout their three-week journey, these 13 riders, not all of whom are professional cyclists, have demonstrated that the mileage and parcours demanded by the Tour are nowhere near too challenging for even amateur female cyclists, let alone the professional female peloton. With each year, their project gains increasing notoriety and support from the media and the public, and places mounting pressure on the ASO to reinstate the women’s Tour de France.

So from a logistical point of view, how would this be achieved? Each of the various failed reincarnations of the original 1984 women’s Tour have had to eschew the iconic Tour de France branding and be run separately from the men’s race in order to avoid copyright infringement. A further and undoubtedly related common denominator among the failed women’s Tours of yesteryear is that they were routinely unable to garner sufficient media coverage and, as a consequence, failed to successfully court viable sponsors. Here is where the ASO and the Tour de France enter into the equation.

In order to mitigate several key logistical hurdles inherent in the staging of such a large-scale event, and to prevent the rejuvenated women’s Tour from being relegated to the overcrowded graveyard of doomed UCI women’s races, it is essential that it be firmly integrated into the current men’s race. This will allow the new event to benefit from the Tour’s existing infrastructure and infamously broad media exposure.

This may admittedly be somewhat problematic from an ideological perspective, yet from a logistical standpoint, the men’s race would undoubtedly be an indispensable springboard for the development of the women’s event. One need only look to races such as Strade Bianche, Gent-Wevelgem, the Tour of Flanders, Amstel Gold, La Flèche Wallonne or Liège–Bastogne–Liège to see viable examples of this format, some of them only very recently established.

A joint men’s and women’s event, as is so common at other major sporting competitions such as Wimbledon, the Olympic and Commonwealth Games, and national and world championships across a range of sports, would enable the sharing of existing assets, specifically mass mobile infrastructure, dedicated media interest, contracts with host towns, and key event and jersey sponsors.

With at least 2,000 journalists, 100 photography agencies and 94 television channels already stationed at the race, plus the addition of a mobile crew to film the women’s event, the world’s media would be waiting at the ready to report on the exploits of the women’s peloton, allowing women’s cycling to finally receive the equal attention that it deserves. And of course greater media exposure will facilitate further organic growth of the women’s event, which will in turn be able to attract separate financial backers of its own down the line.

The envisaged final product would ideally consist of a fully-fledged stage race of a similar length to the men’s event. However, it is important to remain mindful of the undoubtedly pyrrhic victory that would be precipitated by overzealously smacking into the women’s calendar a race that is over three and a half times longer than any existing UCI-sanctioned event. As such, prominent athletes, most recently Dame Sarah Storey, have argued for the introduction of a staggered development phase. This gradual transition would help to prevent the event from growing unsustainably while also allowing riders to alter their training regimes to enable them to race competitively within a longer race format.

In its nascent form, then, the women’s Tour would be a race of one to two weeks in length that is completed several hours prior to the men’s event. To hold the stages either a day beforehand or a day afterwards, as some have suggested, would be neither sustainable nor the most efficient use of the Tour’s existing resources. The Tour is a notoriously fast-paced event that whisks its logistical circus to new locations around the country in the blink of an eye. It makes no sense to host a women’s event a day or so after the men’s, when the race organiser’s bottom line instead dictates that the entire stage infrastructure must be swiftly dismantled to be set up in the next host town.

Double The Action, Twice The Atmosphere

A second peloton passing through the streets on the same day would also give the 12 million roadside spectators who line the route each year an opportunity to experience two races. The famed publicity caravan consisting of a flotilla of oversized barnyard animals and giant bottles of detergent that provides boundless entertainment to the masses as it hurls free samples their way could easily be bumped up in the daily schedule to facilitate this. The women’s race would arguably be of greater entertainment value and through its inclusion, the ASO may even find that its roadside crowds, not to mention its all-important global television viewership, will grow as a result of this additional drawcard.

The ASO already possesses the resources necessary to pull off this multi-week logistical feat. Compared to the mammoth infrastructure that is already required to host the circus that is the world’s largest annual sporting event, the challenges presented by allowing the women’s peloton to ride ahead of the men would be relatively minor.

Through the inclusion of a women’s event, the Tour de France race organisers would not only be ameliorating what can only be described as an acutely embarrassing disregard for female professional cycling, but would also be tapping into a potentially incredibly lucrative market. The women’s peloton would undeniably provide the ASO and the Tour with more than a quid pro quo for finally being granted their place in the most iconic cycling race in the world. 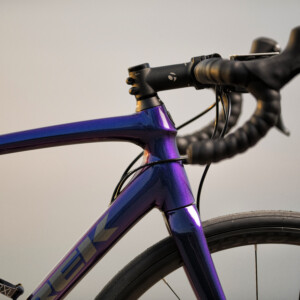 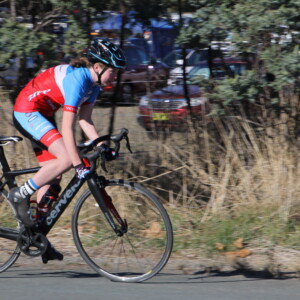