Lotto Soudal’s Andre Greipel has notched yet another stage win to his impressive Tour Down Under record, the German sprint star powering to victory at the end of Tuesday’s 145km Stage 1 from Port Adelaide to Lyndoch.

Out-sprinting Mitchelton-Scott’s Caleb Ewan and People’s Choice Classic winner Peter Sagan of Bora-hansgrohe, Greipel was all class as he accepted the first Ochre Jersey of the 20th anniversary edition of the race.

“It’s nice to be back here this way after a few years of absence,” said Greipel ‘the Gorilla’, who hasn’t raced the Tour Down Under since 2016 and last won a stage in 2014.

“Because of the heat, the racing isn’t that stressful,” said Greipel. “(Plus) we were one guy down (non starter Bjorg Lambrecht due to a UCI technicality) but my team set the sprint really well.

Greipel concluded by expressing how pleased he was to now wearing the Ochre Jersey into Stage 2.

Caleb Ewen: ‘I Went Too Early’

As Greipel was donning the jersey, Caleb Ewan told journalists he simply started his sprint too early.

“I’m really happy with how the team worked but at the end of the day, it’s just my fault if I didn’t win,” he said.

“Like I’ve said before, the sprint field here is better than it has been for the last few years. I’m happy for it to be like that because I’m racing against these guys in some of the more serious races coming up – it’s good to get a feel of how they sprint. I’ll be analysing these sprints and seeing where the weaknesses may be.”

The 148km Stage 2 will begin in the Adelaide suburb of Unley and travel through to the Adelaide Hills, making three laps of  of Stirling before the race finish on Mount Barker Road. 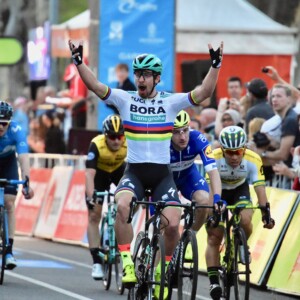