Milan, Italy: Unanimously respected as one of the world’s premium tyre producers, the name Pirelli is synonymous with Formula 1, Moto GP, the prestige car sector, and performance-oriented vehicles and motorcycles.

So a little over a month ago, when Pirelli announced they’d be returning to the road bike tyre market, there was world-wide interest and anticipation in the wake of the news.

No stranger to cycling, Pirelli tyres were engrained in the sport for more than 70 years. They featured in the first Giro d’Italia in 1909 and remained a major player in the cycling world right through to 1992. In fact, Pirelli were making bicycle tyres years before they started on car tyres!

After a 25-year absence, the Italian company is back with an initial offering of three road tyres – the PZero Velo, PZero Velo 4S and PZero Velo TT.

To Pirelli HQ In Milan

With that as a preamble, 2 days ago I found myself with a bunch of cycling journalists (bike geeks if you prefer) from all across the world. We were guests of Pirelli’s cycling division – as passionate a group you could ever meet and all genuinely excited about the company re-entering the market after such a significant absence.

The PZero Velo project has been more than two years in the making. Immediately upon entering the company’s laboratory in the Milan head office, it became instantly obvious why Pirelli invited journalists from right around the world to take a first-hand look at exactly what they do.

The level of research, development, chemistry and lab testing that has gone into the PZero Velo project is simply mind-blowing. In one room we were shown a tray of chemical components that make up the company’s new and patented SmartNet Silica. An ultra high-tech concoction – the point of difference here is that instead of being randomly positioned through the tyre, elongated molecules sit longitudinally in the direction of travel. This, say Pirelli, means less rolling resistance and yes, a faster tyre.

Initially releasing three different models, the PZero, PZero TT and PZero 4S, each are colour-coded just like their F1 siblings.

The PZero Velo is embossed with silver identification and aimed squarely at road racing. It is light (195grams in 23mm, 210grams in 25mm and 230gm at 28mm). According to Pirelli the PZero “provides speed and handling along with dry and wet grip meaning top cycling safety. It is ideal for competitions or training on any type of surface.”

The red labeled PZero Velo TT, is obviously the fastest and lightest offering in the range and features great handling as well as top behaviour in the wet. This tyre is completely devoid of grooves and will only be available in 23mm. It weighs in at a featherlight 165gm.

The final tyre is the blue-labeled PZero Velo 4S, an all-season tyre that offers a higher level of puncture protection and an outstanding wet grip guaranteeing, at the same time, rolling, comfort and mileage. Tread wise, the 4S features a wider and more profound lightening bolt pattern. Weight wise, the 4S is 205gm, 220gm & 250gm in 23mm, 25mm & 28mm sizings.

A word on the tread pattern that Pirelli call ‘ìflashî’. It features tight angles in the middle ( pointing the direction of travel). These lead to a lateral opening to provide extra grip and assist water drainage. The tread is progressively deeper to enhance resilience and give the tyre great reactiveness and responses when leaning into bends.

Pirelli managment made it clear that these three models are just the start. We can expect to see more tyres, including tubulars, tubeless, MTB and commuter tyres in the not to distant future. I was also told that the company is in sponsorship discussions with several WorldTour teams.

“One of the key elements is we are talking to several top teams,” said Johan Molenmaker, Global Head of Sales for the tyre division.”But one thing is we really want a collaboration with a top-level pro team. We want co-development and this is something we’re working on.”

So How Do They Ride?

Now to the fun part. After yet another early alarm, a room full of eager cycling geeks were kitted up and scoffing down breakfast, loading for the big day ahead. An hour up the Autostrada by bus and we arrived at the Pirelli testing centre which is basically a mid-sized racetrack with skid pans, esses, cobbles and various other surfaces.

There were pop up sprinklers everywhere and all manner of obstacles. There was even a company tyre tester on an electric assisted bike fitted with numerous sensors. Dressed like The Stig but in full black leathers and a full face helmet, his job is to ride tight high-speed circles on a wet circuit and try to stay upright.

With 40 or so high-end bikes ready to ride, we set off to get our first feel of the tyres on the dream roads of Lombardia.

I started out on a De Rosa SK Pininfarina with Campagnolo Super Record EPS and 25mm PZero Velos fitted – it couldn’t have been more Italianif it tried. Setting off for a local 48km loop that included 500m of climbing, we covered a range of road surfaces from unkept bike paths to pothole-riddled backroads to speed bumps and on to smooth bitumen. There was even a large patch of broken glass to cross. “Placed by Pirelli?” someone mused, no punctures but probably not.

Three major points stood out for me – speed (or should I say reduced rolling resistance), security, and comfort. Sure the bike was a total dream machine, but the tyres clearly and considerably softened the ride. Security – maybe that should be surety. On several short, fast and twisty descents, on roads I’d never seen and numerous ‘mystery corners’ blocked by high foliage, the tyres instilled a high-level of confidence. They quickly gained my trust and gripped tight on each and every bend.

Returning from the 48km loop we took the bikes onto the wet test track to continue the ‘research’. Many were pushing their (& their bike’s) limits and yes, one rider did come down when pushing hard into a tight right-hander (a tough Dane … he was fine).

It’s difficult to tell after a short, 20-minute test, but Pirelli seem to be spot on with their claims – the tyre’s wet-weather capabilities do seem to raise the bar.

It would be impossible to spend time at the Pirelli factory – meet the staff, visit the laboratories, observe the testing rooms and ride their race track – and not walk away super-impressed with this global colossal of a company.

All aspects of the business are clearly driven by passion, dedication, determination, and the desire to remain the high-performance market leader while taking on bold new challenges.

A day later and I’m still in awe of the science, chemistry, incessant scrutiny (over 100,000 actual road kilometres!) and big data correlation from non-stop and ongoing laboratory testing.

I predict PZero Velos will make a significant mark on the bike tyre industry – it will be fascinating to watch the story unfold.

Pirelli PZero Velo tyres will be available in Australia from early August and are expected to retail from $69 through to $75. 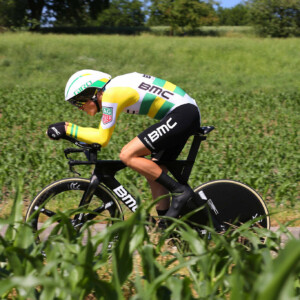