In part one of this five-part series on bicycle wheels I discussed bike wheels as a ‘whole’ including how they evolved from separate components from different companies to individual structures. Having run through that, I broke them apart again and devoted one article each to the hubs, rims and spokes. This is part four, all about spokes.

It’s all in the wire
Cheap spokes are steel with a zinc plating to keep them from rusting too much (though they’ll still rust if left in the rain). Good spokes are stainless steel. The best spokes are made from the best wire, and most companies seem to agree that the best wire comes from Sweden (Sapim, DT Swiss and Pillar all use wire from the same mill).

Traditional spokes have a J-bend in one end and a thread on the other end (rolled into the wire rather than cut). Modern variations abound: straight pull spokes, double threaded spokes (a thread at each end) and spokes designed so the head sits in the rim and the threaded end fits into the hub to name only three. All steel spokes begin life as silver wire. Most bikes now come with black spokes, the wire is electrostatically coated after production – scrape the spoke with a sharp implement and you’ll remove the black. Coloured spokes are also available but don’t seem as durable as the black option.

Basic spokes are the same diameter from one end to the other – usually 2mm and the same diameter as the wire they started out as. To build a stronger wheel we would turn to “butted” spokes (technically they are swaged rather than butted ) which have a skinny section in the middle. The narrow bit lends some elasticity to the spoke, making it more robust in the wheel, but also removes some weight. The butted version of our basic spoke is still 2mm at each end, but is reduced to 1.8mm in the middle. Extreme versions reduce the central diameter even more – two options that come to mind are 2.0-1.6-2.0 or the even lighter 2.0-1.6-1.8 option. On the summit of spoke options sits the mini-bladed version; the extensive cold working of the wire to make the elliptical cross section increases the durability of the spoke markedly. Mini-blades are distinguished from blades by the fact that the spoke fits through a standard hub flange spoke hole – to fit regular blades requires slotting the hub holes with a saw.

Over the past 20 years I have seen titanium spokes, carbon fibre spokes and aluminium spokes. Any non-steel spoke that is designed to fit into existing hubs and rims is doomed to failure because the alternative materials are not up to the task in the same space as steel. Titanium is strong and light, but a Ti spoke in the same dimensions as steel is fragile and prone to breaking. I have seen oversized carbon spokes that work OK (just no sticks in the wheel, please) requiring matching hubs and rims. I have also seen carbon spokes that use steel ends to fit into existing hubs and rims, but they had the same fatigue issues as other steel spokes with a very expensive carbon portion in the middle. The most successful option I have seen is oversized aluminium spokes that by their design require a specific hub but can work with any rim (although they usually require special drilling). They are much more expensive than steel spokes, but very light and available in pretty anodized colours. They also seem to last really well. Their girth doesn’t lend themselves to being especially aerodynamic however.

The partnership of spoke and nipple
The anchor of the spoke is the nipple. There are two main variations in the nipple; brass and aluminium and the threads can incorporate a thread-lock or not (yielding four options before we consider colours and esoteric nipples). The standard nipple provides the interface between the spoke and the rim, it protrudes through the spoke hole in the rim and has spanner flats on it for adjustment. Over time nipples become more difficult to turn on the spoke threads (corrosion and dirt are both culprits) and aluminium nipples can break in half if forced; brass nipples are stronger and much less likely to break.

Special nipples include ones with proprietary shapes for a specific tool to reduce the chances of nipple damage. Many aero and carbon rims keep the nipple completely inside the rim, requiring a nipple driver inserted through the tyre side of the rim in order to adjust the nipples.

Spokes are put under tension as the nipples are tightened. It is this pre-tensioned nature of the wheel that makes them so strong and light. It also means that the weight of bike and rider stand on the bottom three or four spokes – they do not hang from the top spokes as I have seen some authors assert. As long as the weight placed on the wheel doesn’t make the spokes go completely slack, the wheel is doing its job and the principal of standing on the bottom spokes applies.

Wheel stability and buckles
The way a wheel can go out of true usually involves the wheel momentarily exceeding the tension of one spoke. When slack the nipple is free to rotate and they never get tighter – always looser. Now that spoke is slightly less tight than the others in the wheel and in future it will take a slightly smaller load to return that spoke back to slack (which permits the nipple to loosen yet again). Eventually one spoke can come fully loose (to the point of the nipple falling off the spoke); just over the course of a few days of riding if the conditions permit. All things being equal, tighter spokes provide more initial tension, are harder to make completely slack, and therefore make wheels more resistant to going out of true.

Of course, all bets are off if the wheel hits something hard enough to dent the rim. Permanent deformation of the rim is obvious when the solution to true the wheel is that the tight spokes need to go tighter while the loose spokes need to go looser.

With one revolution of the wheel each spoke runs under the hub and has a decrease in tension for a brief moment before it takes up the full load again. This cyclic unloading is a strain on the metal in the spokes. If there are weak points in the spokes, this cycling will work on them first. For this reason, stress relief is a vital final step in wheel building.

Most readers of this magazine who’ve been riding for a while will know someone who got a new wheel and started to break spokes – usually at the J-bend but sometimes the threaded end – after only 800km of riding! That is cyclic fatigue. The twofold solution to that is for the wheel builder to stress relieve the spokes before the final true and also for them to ensure the spokes are appropriately tight in the wheel. If you want to know about what makes a bike wheel work, and also how to assemble one, I highly recommend The Bicycle Wheel (Brandt 1993) as a guide.

If asked 15 years ago I would have stated that matching the spokes to the chosen rim was the best option for building a durable wheel. Now that the mini-blade spoke is always the answer to the question “what is the best spoke for my wheel?” the question is really only how many? A really stiff carbon rim can be softened up ever-so-slightly with fewer spokes (less than 24) or kept really stiff and responsive with more spokes (more than 28). We seldom get that choice anyway; perhaps across brands.

A good spoke should easily outlast the hub and rim it comes with (in fact, it should outlast the entire bicycle with a 250,000km lifespan not unrealistic). If you’re having spoke breakage problems with good quality spokes it is not the spokes’ fault. Something else is causing it.

In the final instalment I will discuss using the knowledge of wheel parts in shopping for a new pair for your bike. In future when you do look at wheels, spare a moment for the spokes as they really do make the wheel.

Thanks to Bicycle Parts Wholesalers for images in this article. Check out their wheel building service at BPW.com.au

Hang him from the yard-arm!

I assert in the main article that the weight of the bike “stands” on the bottom spokes of the wheel. I didn’t consider when I wrote this that it might be a contentious statement. As someone who did a degree in chemistry and physics (and someone who read the book The Bicycle Wheel where there is an entire section devoted to the structure of the wheel) it is simply ‘the right answer’.

Perhaps I can convince you (before you read the book)?

Take a bicycle, any bicycle, that has good wheels with tight spokes. If they are really good wheels the tone of a plucked spoke will be the same for all spokes in the wheel (doesn’t matter if there are only 16 or if there are many more). Most mass produced wheels are not perfect, but pretty good. So the tones will be close. It helps if you are musical!

Get someone to sit on the bike. Pluck the spokes again. The tone of all but the bottom few spokes will be unchanged (indicating no increase in tension) while the bottom three or four will have dropped in pitch (indicating a lower tension). That is how stringed instruments are tuned – by changing the tension on the strings (violin, piano, guitar to name three).

Take a spoke by itself and push on both ends. It bends without much force. Of course it does. It is only 2mm of steel wire.

However, once built into a wheel, that spoke has up to 3000N of tension in it (around 300kg if you prefer, though most wheels have only half that tension on each spoke). Now if you could stand a weight on the vertical spoke, as long as that weight was less than the tension in the spoke, it would decrease the tension rather than bend the spoke.

The road pushes up on the tyre, which pushes up on the rim, which flattens slightly, which decreases the loading on the bottom few spokes. Cruising along on your bike the wheels go around about three times per second. In an hour that is about 10,000 revolutions. It is this cyclic unloading of the spokes that leads to fatigue failures (broken spokes). It is the proportional unloading that is important – so tighter spokes, and more spokes, build more durable wheels (because they both contribute to smaller unloading per cycle).

(Hang or stand? Go to this article on our web page to leave a comment. www.bicyclingaustralia.com Ed.) 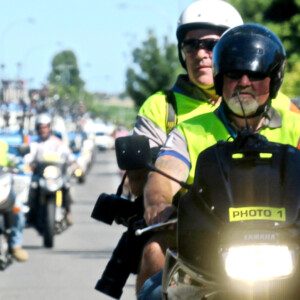