For many people track cycling comes around every four years and then disappears into the cultural underground, raising it’s head every now and then when Anna Meares breaks a world record on home soil. It’s a shame because, despite the best efforts of the Olympic committee, track racing can be an extremely exciting spectator sport. Ernest Hemingway was a great fan of cycling, particularly the Paris six day races. Indeed he credited it with saving him from a life of gambling at the race track.

Many people now are less knowledgeable about track racing, but with the Olympics nearly upon us, we thought it timely to write a guide for those who have yet to try this beautiful sport.

At the London Olympics, the track events will entail the team pursuit, team sprint, Omnium, sprint and the Keirin. Each event will be contested separately by men and women, the first year that gender parity has occurred in cycling events at the Olympic Games.

In the team pursuit competitors ride close behind each other to minimise drag. The lead rider takes the wind before swinging off and re-joining the back of the group. At a certain point one rider will do an extra long pull on the front before pulling out of the race. This allows the team to achieve an even greater speed for the final distance. The top three times only are taken into consideration.

The Sprint is basically a three lap race between two riders. The sixteen riders will race a 200 meter time trial to allocate positions and then knockout races will begin. Riders who have been knocked out will compete in repechage events where the winning rider can get back into the final rounds. The final race is a best of three sprints.

One of the most bemusing parts of the sprint for outsiders is riders using slow tactics, sometimes coming to a complete standstill during the race. Like a Tour de France sprint, the rider who can come from behind and stay out of the wind is often the winner. Sometimes however a rider will sprint right from the start, taking their competitor by surprise, although this doesn’t happen often.

The Team Sprint is similar in format to the Team Pursuit except that there are only three riders for the men and two for the women. A time trial format decides the rankings and the teams then ride off on knockout rounds. Each rider does one lap before pulling off and for this reason you will mostly see the strongest rider taking the second turn.

The Keirin is one of the most exciting races in the track program. A small motorbike known as a Derny leads the riders out at a slow speed of about 25kph, gradually increases in speed and leaves the track approximately 600–700 meters before the end, at a speed of about 50kph. The riders who have drawn lots for the starting order behind the bike then sprint he remaining laps. First across the line is the winner.

Similar to a bunch sprint in road racing the winner usually comes from behind on the final lap. There is usually a lot of leaning and flying elbows and crashes are not uncommon. It is fast, furious and exciting. 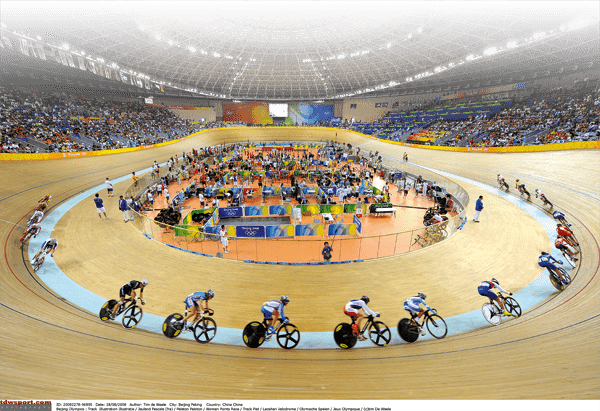 The Omnium is a new event added to the Olympic program to compensate for the loss of the Madison and the Individual Pursuit. It contains six disciplines which must all be completed by one rider from each nation. The riders earn cumulative points for each event and the rider with the least number of points at the end is the victor. The disciplines are a Flying Lap, Points Race, Elimination Race, Individual Pursuit, Scratch Race and a Time Trial.

In the Flying Lap, riders get a warm up and pass the start line already at full speed. They then ride as hard as possible for a single lap and the rider with the fastest time takes the lead. The points race is more complicated. It is a mass start event of 30km (120 laps) for men and 20km (80 laps) for women. A sprint is held every ten laps, with 5,3,2 and 1 points being awarded to the top four finishers in each sprint. You can also gain an extra 20 points by lapping the field. A rider therefore has to know their points accumulation as well as that of their rivals. They also have to be aware of the lap count and their own position in the overall standings while riding as fast as they can.

The Elimination Race sees riders mass start and also contest a sprint at a set number of laps. The rider who is last over the line is eliminated from the race. At the last lap, the final riders will sprint for the win. Tactics really come to the fore in the Elimination Race as the rider who is best able to ride behind the others and use up the least amount of energy without being eliminated is likely to be the most successful.

The Individual pursuit is similar in format to the Team Time Trial but as the name suggests, is conducted by one rider from each squad. Two riders start and finish at opposite sides of the track. The race is over four kilometres for men and three kilometres for women. This event makes good TV viewing as the camera is set up in line with the start and finish lines. This allows you to see who is winning, who is catching up and so on. Australia’s Jack Bobridge is the current world record holder in the Individual Pursuit.

It’s a return to excitement in the Scratch Race. Possibly the purist discipline this race is held over 15km and is simply a matter of first rider across the line. There are no intermediate sprints or points accumulation.

Just like the Tour de France of recent years the Omnium finishes with an individual Time Trial. This is run over one kilometre for men and 500 metres for women. At the end of this, the rider with the lowest accumulation of points overall is declared the winner. 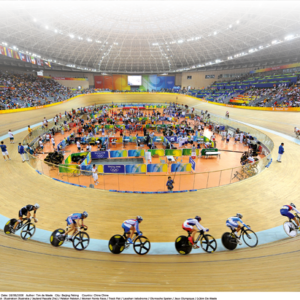 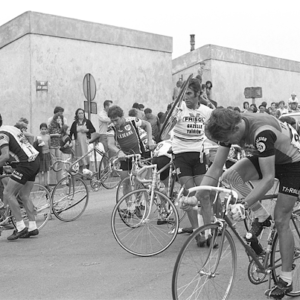