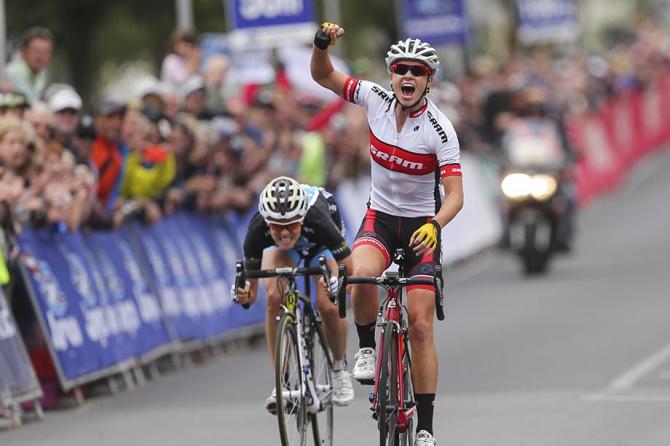 In a bid to develop and support women’s cycling in Australia, the organisers have combined the men’s and women’s program to include the women’s race on the last day of the National Championships. The 102km women’s race will commence at 8am, followed by the men’s 183.6km race at 11:50am, this allows the broadcasters to cover the last hour of the women’s race live before the traditional showpiece of the national event.

In previous years the Elite Women’s race was held on the Saturday and for footage to only be shown in highlight reels during late night recaps of cycling on the respective channels.

Tiffany Cromwell (Canyon-SRAM) whom we mentioned in the news yesterday told CyclingTips, “It is exciting to change it up a little bit, and the broadcast is good,”

“Maybe if it is well received we’ll see a live broadcast next year.”

She did however, state that she felt the women’s cycling event may be seen as a sideshow to the men’s event held the same day and questioned whether the spectator turn out would be the same if her event had it’s own day.

Combining the two events on Sunday also reduces the cost of broadcasting the event for Cycling Australia, yet allows the event to be showcased live. It will be a long day for the volunteers but a first for the event.

The program for the Australian Road National Championships is now as follows,

Continue to view Bicycling Australia’s website for up-to-date coverage of the National Championships as it happens.