The rise of carbon fibre frames over the last couple of decades has seen continual evolution and improvement in the relative stiffness, weight, and rigidity of frames.

Concurrently, manufacturers have continued to spruik the vibration damping, road-feel and handling improvements achieved through refined geometry of frame tube designs and features. The question the Z4 challenges us with now is whether these advances have come far enough that a single bike can meet the needs of the majority of road riders.

Laying eyes on the Z4 for the first time, I thought these claims may prove to be accurate. The Z4 offers an endurance style frame in terms of the geometry. It boasts large tube diameters and a chunky down tube to seat tube junction wrapped around a BB30 pressfit bottom bracket: a nice recipe for a stiff and race appropriate machine. Technically, however, the Z4 disc would not be compliant for club racing due to the presence of disc brakes, but this may change shortly, given the pressure the UCI appears to be under to approve discs for race use. (The current state of play there is that approval to use discs in the 2016 Paris Roubaix has been proposed but has not been confirmed by the UCI.)

The Z4 is equipped to enable the rider to tackle just about any terrain. It boasts SRAM hydraulic discs, Mavic 25mm tyres and the SRAM Rival groupset (although this review bike was fitted with top of the line Red hydraulic shifters), with a compact crankset of 34/50 and a 12/32 cassette. Mavic Aksium ONE wheels were fitted to allow the presence of the necessary discs. The sturdy frame is completed by a comparably thin proprietary seat post with a Prologo Scratch 2 T2.0 perched on top.

The Z4 certainly felt light enough, whether being pointed uphill, or picked up via the top tube (upon doing so, one mate proclaimed: “damn it, it is lighter than my bike”). The frame is quite stiff around the bottom bracket and stays area, solid under power and responsive. When I first jumped on the Z4 my immediate thought was that I was riding a small frame, not the 56cm labelled one beneath me.

The frame geometry, particularly the tall headtube (180mm on the 56cm frame) gives the rider a very upright position, even after lowering the stem as much as possible. I prefer a more aggressive position on the bike than the Felt affords in stock spec and could have tweaked setup marginally with a longer and negative rise stem to achieve a setup closer to my usual. So while stiffness and power transfer are quite good the Z4 is less inclined towards high level racing and more interested in a long ride through the hills in the company of good mates; finding some steep gradients to show off its climbing prowess and then use its confidence inspiring discs to lead the way down the other side.

The stiffness of the Z4 frame is very adequately dampened via flex in the seat post. Over vibrations and bumps the movement afforded by the seat post was very noticeable and it did a thorough job of smoothing out even quite bumpy terrain. A feature well matched to the presence of the discs on the bike. While my rear end was having a plush ride I felt the choice of handlebars was not so compliant. The combination of strong headtube dimensions, short stem and alloy bars provide very good steering control but are also quite stiff. Fitting the Z4 with a longer stem and/or carbon bars would enhance comfort levels of the front end too.

One of the big selling points of the Z4 disc is obviously the presence of discs; a new feature for Felt in their 2015 range. The arrival of discs on road bikes has been a highly anticipated, yet slightly drawn out process. The mountain bikers among us are well aware of the braking power and modulation offered by disc brakes, particularly in the wet. I for one have been quite keen to see how these advantages transfer to the road. The first potential problem with discs that the weight weenie roadies would highlight is “all that extra weight”. The major OEMs have all now delivered disc brake systems, both hydraulic and cable, which add minimal weight to the groupset, maybe not light enough for the purists, but for most of us, they are close enough.

I was happy with the performance of brakes; they stopped very well, had plenty of power and the feel and modulation was quite good. So is the Z4 truly the bike for all seasons? Can it deliver performance on all fronts? I would say no, not all, because it’s not technically race legal nor does it have geometry to perform at the highest level in racing situations. But I’d also say that it shouldn’t have to or even be trying to. The upright geometry coupled with relaxed 72.5 degree head tube angle give high levels of comfort and predictable handling over a variety of terrain—which you can access thanks to the broad gearing range on board. The stiffness of the frame, rather than delivering the feel of a full on race bike, offers the rider good overall efficiency for those long days in the saddle when every little bit of effort cannot be wasted. The Z4 will deliver its rider in comfort, with confidence—and reasonable speed to just about anywhere they are game to travel.

If you’re after a race machine, the Z4 disc isn’t for you. For the rider setting out on long rides, hilly rides, grand fondos and pretty much anything other than racing, the Z4 performs well. The strong frameset coupled with a bit of seat post flexion and upright rider position delivers an efficient but comfortable ride.

What price happiness? The Z4 is a quality bike that will provide many years of pleasure, racing your mates or just going solo. At $3,290 I’d say it is quite good value for your money.

The Felt Z4 delivers a good overall package: well designed and built frame, hydraulic discs, 11 speed shifting and a comfortable, predictable ride. The Z4 is a choice worth considering for those not necessarily wanting to race but to put in some good hours on the bike. 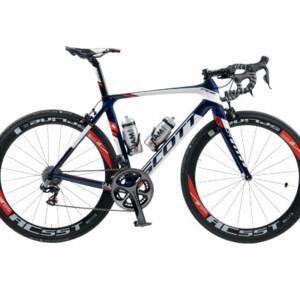