Causing quite a stir globally when it launched in 2014, the specialized diverge is a different, intriguing take on the performance road bike.

New technologies are great, but technology is useless without the proper application. Specialized’s new line of Diverge bikes don’t bring any big new fabrication methods or aero advancements, but rather apply existing technologies to create a light, fat, comfy and distinctive machine that not many makers could pull off on such a grand scale.

The Diverge looks predominantly like a regular road bike, even the disc brakes are not so confronting these days, but the Diverge will accept tyres as wide as 35mm! For this dirt road lover, the first sight was pure confection. The Diverge isn’t a cyclocross bike or a touring bike or a city bike or a randonee bike, nor is it a regular road bike. Specialized has morphed their Roubaix and Crux models, overall it’s far more Roubaix than Crux. Comfort features from the Roubaix such as Zertz inserts and the CG-R post make cameos, as do wheels and tyre clearances right out of the Crux line. The frame is adorned will all the mod cons, such as internal cable routing for mechanical and electronic drivetrains and brakes, a Press Fit 30 bottom bracket, and tapered steerer fork. The adjudicator is the geometry chart: the Diverge has the same head and seat tube angles as the Roubaix and top tube, stack, reach and wheel base are identical or within 2mm.

Of course this new frame and fork had to find room for the big tyres, and has very discrete mounts for fenders (but none for racks). The top tube is very low, to expose more of the CG-R post. At 350mm long, it was only just long enough for me. The front hub is secured with a 15mm through axle (a common mountain bike standard), and the rear wheel uses a 12mm/135mm through axle, (a less common mountain bike standard). The axles are secured with a 5mm allen key and special axle which threads into alloy seats molded into the frame and fork.

After one ride on the Diverge you can only think that all of the hoopla around compliant frames could be chucked out the window, in favour of simple frames that will accept fat tyres, although tyre and wheel choice would be crucial. The Specialized Roubaix Pro 30mm tyres utilize a light casing and the upspecced Roval Control SL CX wheels on our review bike make for a light respnsive package. The stock, ‘off the shelf’ Diverge Expert in your Specialized dealer’s store will run Specialized’s alloy rimmed AXIS 4.0 Disc wheels and wont be quite as light at the Rovals.

On gravel roads Diverge hums along without fuss. There is enough cushion between the road and rider to mute the variances in the surface and you can really hammer along. It’s perfect for all day rides out in National Parks and State Forests, where you’d prefer to leave your skinny tyre bike at home, but a mountain bike would be overkill. There are thousands of car-free Gran Fondo circuits and town to town routes out there, waiting for a bike like the Diverge. I would have loved to see a third water bottle mount on the underside of the Diverge’s downtube to allow you to go that little bit further than usual.

My favorite dirt Fondo has two solid climbs, one on tar and one off, joined with undulating roads of gravel and hard packed dirt, usually covered with a light dusting of sand. The Diverge allowed me to stay in the drops and power over corrugated sections, making a notable difference in average speed over the loop when compared with other bikes, and it climbed like a performance road bike. The sandy and gravelly corners must be approached with absolute caution on a regular road bike, and the fat tyres of the Diverge help, but they’re no replacement for a full size treaded tyre.

Shimano’s disc brakes may seem spongy if you grab them on the shop floor, but the power comes on early. The light lever disguises immense stopping power and control. Irrespective of debate about how much power you actually ‘need’, controlling the power you have is far more important, and rim brakes cannot touch this level of control. In this application (loose and slippery surfaces) the discs are perfect, but across the board I can’t think of many instances where having better control of your bike is not a benefit? The hydraulic lines are routed through the frame and fork which can be a bit of a headache. The unusual rear axle spec and straight pull spokes are not difficult to maintain as such, but the parts aren’t common. The Diverge is best suited to adventures close to civilization or well-supported bike shops.

On sealed road the Diverge feels absolutely planted onto the ground. The dirt road manners are expected, but the Diverge can haul on sealed roads. Dead roads were more pleasant and I returned home feeling much fresher than usual. The dead roads are trampled by the big tyres and feel closer to hotmix. The Diverge is much lighter than it looks too, and climbs admirably in this spec. The afore-mentioned light wheels are a plus, as is the spread of gears (compact crank and 11-32 cassette). Combined with a riding position identical to the Roubaix, there’s not much to hold the Diverge back on the climbs. It’s also very rigid and has no hesitation to sprint out of the saddle up sharp pinches. I never got dropped riding the Diverge amongst regular road bikes although long, fast descents do find the limits of the gear range and the rolling resistance of the big tyres finally becomes noticeable when you’re chasing skinny tyred bikes running 100psi at 60km plus.

The bike reviewed here is an overseas model, which has just been removed from the lines to be brought into Australia. It is comparable to the Diverge Expert Carbon. The differences between the models are the carbon wheels which would be lighter than the stock option, Ultegra Di2 gearing and some other smaller components. Both bikes use the same Fact 10r carbon frameset and hydraulic braking. See the spec list for full details on the Diverge Expert Carbon. 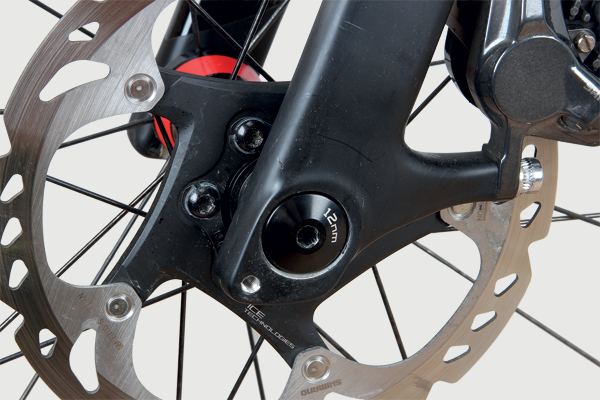