FOCUS is a German based company that was started in the early 1990s. They came to prominence in the road scene in 2009 when they sponsored the Professional Team Milram. FOCUS make a wide range of bicycles in all disciplines except children-specific and BMX. The Cayo Evo 2.0 model tested is one of their second tier frames, below the top of the line Izalco model. While the frame is slightly heavier than the Izalco, the 2012 Cayo Evo frameset is very different from previous years and now includes many of the design features seen on the Izalco.

This frameset is dedicated for Shimano Di2, in this instance Ultegra, and is not compatible with mechanical systems. If you think this might be a problem in the future when Di2 turns out to be just a passing fad and we all go back to mechanical, do not be concerned! Believe me, after you use electronic gears there will be no going back. Riding is more fun with a battery!

The finish of the frame is impeccable and utilises the ubiquitous red, white and matt black carbon colour scheme well. The marketing department must have been working overtime to come up with some of the acronyms, luckily in small print, that try to embellish the key design features (more on these gems later). Perhaps the key sticker is the one on the top tube just under the FOCUS logo. It reads, “Made in Germany”. It’s becoming rare to see bikes produced outside of Asia, but in this case the entire production and quality control is carried out in Germany, which sets it apart from many of its competitors. 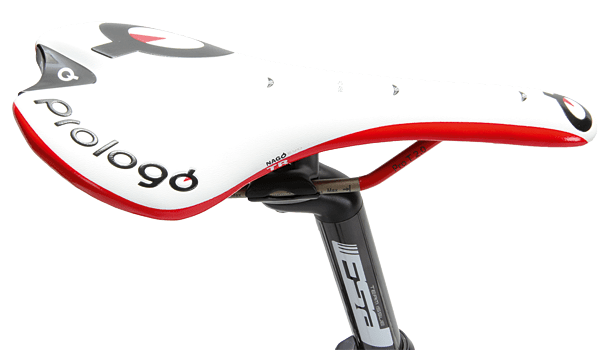 Fitting myself to the bike I was really pleased to find a suitably short head tube for a small sized frame. This gives a nice low stack height and yet the frame also has a good amount of reach, making it perfect for me. There are too many frames, especially in the smaller size range that are too tall in the head tube to be considered real race bikes in my opinion. The Cayo EVO geometry is race ready.

The Inner Cable Routing System (or the I.C.R.S. as I like to call it) is well executed. The use of Di2 and the removal of outboard gear cables give the frame nice clean lines. The rear brake cable is actually fully encased as the outer cable runs its entire length through the top tube.

This was my first use of Ultegra Di2. Other reviews mention how in a blind test it is indistinguishable from Dura-Ace Di2 and this is true. It works in the same superb manner and has the same feel of its much more expensive stable mate. There are visual clues though, and the size of the front and rear hoods is larger than the already bulbous Dura-Ace. It isn’t just the gear changing that shares the same high quality. The stiffness of the chainset and the power and modulation of the brakes are all equally as good. So for a slight weight disadvantage and a huge price saving over Dura-Ace it is no wonder Ultegra Di2-equipped bikes are so popular in the market. On the road the bike immediately felt very well balanced. My second ride on the bike was three and a half hours and I was surprised at the comfort. Perhaps it was the Lateral Reinforced Comfort Seatstays (L.C.R.S.) or more likely the Elbowed Comfort Rearstays (E.C.R.) that did the trick, or perhaps that slight curve to the seat stays. Whatever acronym you use, the bike is comfortable over long distances that included some very rough sections of road. Anyone from NSW who has raced the Ken Dinnerville Handicap will know how harsh these roads are, yet I found this bike handled the imperfections well.

There was also sufficient stiffness to the frame with no flex to be found from the ample sized fork and head tube. Likewise there was a very solid feel to the bottom bracket during out of the seat accelerations. Perfect for short power hills. The bottom bracket utilises a PressFit 30 system. The frame is set up to allow for BB30 (30mm diameter bottom bracket spindles), but uses a press fit adapter to use Shimano’s external bottom bracket cups and their smaller 24mm diameter spindle. This method negates any of the benefits of a true BB30 system, but does allow FOCUS to build one frame, and then adapt it to use the chosen crank systems. 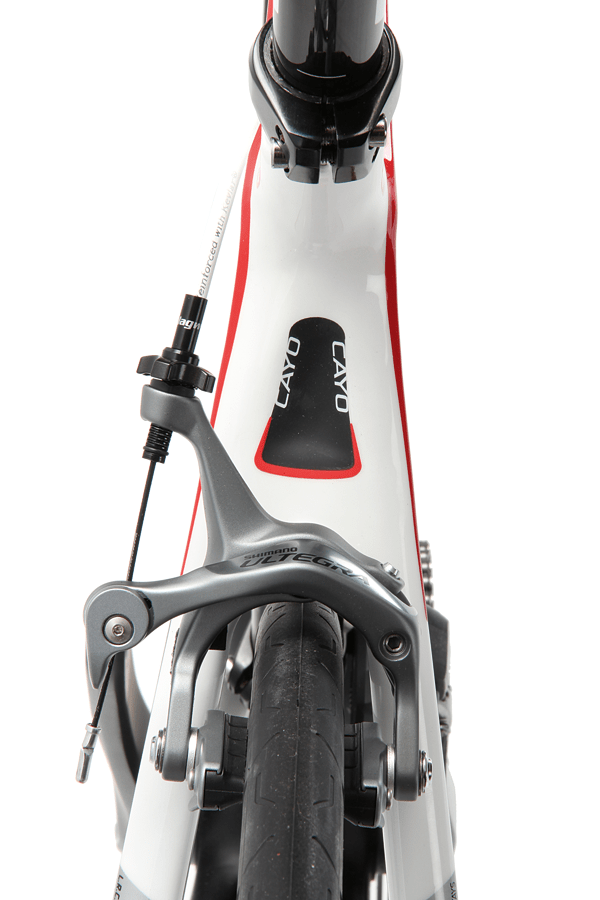 On straight roads the bike tracked well, but one criticism I had was that the handling was slow. This trait appears to be limited to the small and extra small sizes and is due to a very slack head angle of 71.3 degrees coupled with a modest fork rake of 43mm, leading to a very long trail figure of 68mm. Trail gives a very accurate measure of steering stability. Trail figures for bicycles are normally in the range of 50 to 63mm, the lower the trail figure, the faster the steering. While a long trail means the bike tracks well in a straight line and is very stable at speed, it feels very slow to react in corners. Also the front wheel wants to flop to the side at slow speeds.

Most definitely it is a cost-cutting measure to use the same rake fork across all five sizes despite three different head angles. FOCUS uses the same 43mm rake fork despite the changes in head angle. If in the smaller sizes a 45mm fork rake was used with a less slack head angle, the front wheel would still end up the same distance from the bottom bracket, the trail measurement would be dialled back and the handling would be a lot sharper. Remember though that these traits are limited to the smaller sizes and from medium and above, the handling of this bike would, I suspect, be spot on. For anyone who is interested in these things, I’ve included a small table at the end of the varying rakes on bikes I have tested. Price wise the FOCUS is good value, although not a market leader, at $4,799. The frameset is of excellent quality and well finished, while the Ultegra Di2 is a standout. One disappointment and an obvious cost cutting measure is the choice of wheelset. The choice of Fulcrum Racing 5 is a consolation to the budget. The reasonably heavy weight (1,760g for the pair) lets down the performance of the bike. For a better benchmark I fitted some Dura-Ace wheels and this improved the ride greatly. It’s not that the quality of the Fulcrum Racing 5 is bad, it is just that a heavier wheelset tends to slow the manoeuvrability of the bike down. It feels less lively, less willing to accelerate or to change direction.

Other components are well suited to the price point. The FSA carbon stem and alloy bars are good quality, although the very shallow drop on the bars won’t be to everybody’s liking. Such a tight curve makes it tricky to fit your hands into the curve of the drops and therefore makes reaching the brakes and gears difficult. The seatpost was a simple one-bolt design that did its job OK, but it isn’t particularly appealing seeing the bolt extend above the sea clamp. I like the Prologo seat and found it comfortable despite its minimalist look. 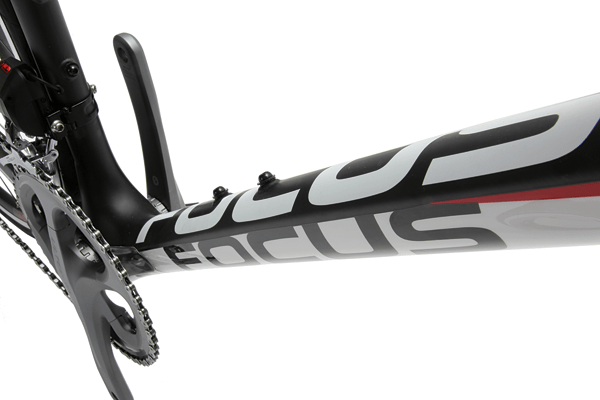 Overall I really liked the Cayo Evo 2.0. If I could fit a medium, or change the fork rake on the small then this bike would be perfect for me. Looking at the positives the small size’s geometry as it stands means the bike tracks a straight line beautifully and would suit anyone looking for a bike with a great race position that isn’t twitchy or nervous. I was also very impressed by the performance of the Ultegra Di2 and would highly recommend it.

The frame is immaculately finished and the ride quality offered is excellent. There are a few concessions to price in the build, but all components are great quality for their respective price points. The Shimano Ultegra Di2 groupset is a standout in my opinion.

A great bike for racing and well suited to long events and rough roads. The handling is a bit slow in the smaller sizes, but for bikes sized medium and above it would be spot on. Fitting a lighter wheelset will transform the bike on race day and make it a joy to ride.

Despite a frameset made in Germany, FOCUS manages to compete very well against other Asian produced manufactures on price. A different seatpost and possible lighter choice of wheels would make it even more so.

I was a little bit disappointed with the slow steering dynamics to be found on the small and extra-small sizes.Without that trait this bike would tick all the boxes. Still looking at the positives, the bike is very stable at high speed and surprisingly comfortable. 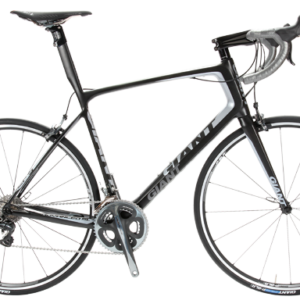 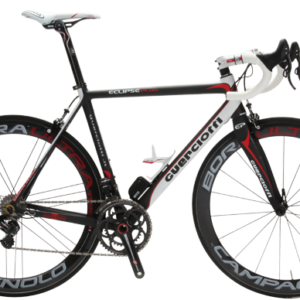