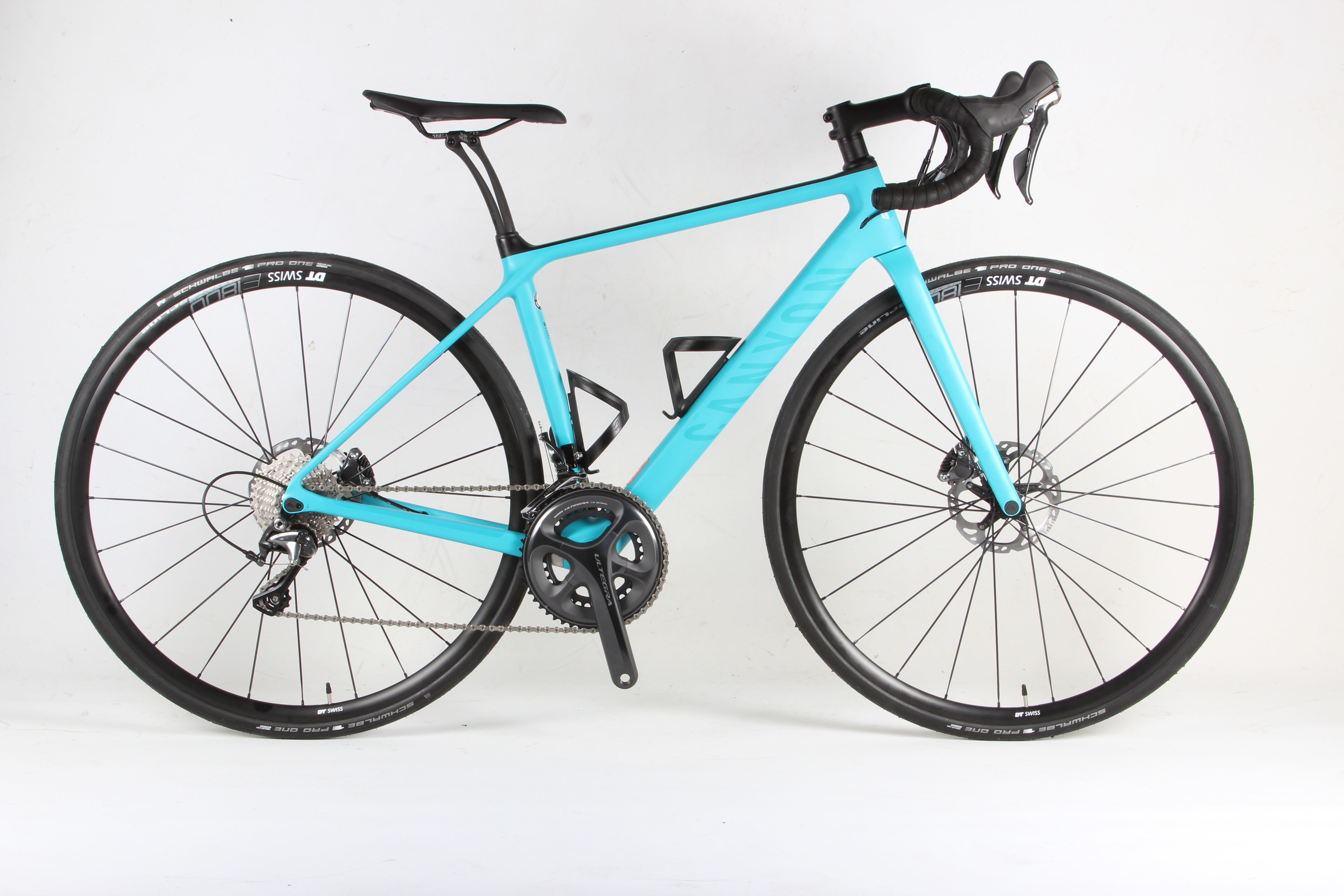 New to the ever-growing range of women’s specific bikes, German direct sell brand Canyon has joined the chase, releasing a range of ‘WMN’ machines including comfort-first Endurace models. Specifically designed for smaller riders featuring high-end componentry and an incredibly reliable braking system, Canyon seem to have pinned the nail on the head of exactly what (most) women want out of a bike; comfort, value for money and confidence-inspiring. Our women’s journalist Gemma has spent the past few months putting the Canyon Endurace WMN CF SL DISC 8.0 to the test.

Canyon tout the Endurace WMN CF SL as specifically for “the women who love to go long”, however long, short, a quick nip into town or a 100km mixed surfaces ride, I’d choose this bike each time over. Designed with their self-named ‘Sport Geometry’, Canyon has designed this machine with comfort at the forefront. Everything from positioning, handling and braking capability to carbon layup and ‘comfort’ touch-points, the Endurace WMN range inspires confidence and increases overall rider enjoyment.

After all if you’re not concerned about how sore your butt is or how you’re probably going to feel very stiff after six hours in the saddle, then your only task is to enjoy the ride ahead.

Maintaining female-specific designs:
Like Specialized, Canyon have completely re-designed what they determine to be ‘female-specific’, despite the result showing opposite ends of the spectrum with Specialized removing their ‘women’s’ label altogether and opting for a new and improved ‘unisex’ range.

More than ever are women in the market for high-end machines and its clear Canyon are more than happy to oblige. Their title sponsorship of women’s world tour team Canyon/SRAM initially saw the brand developing top-level bikes for female riders and now with the release of their WMN range their bringing these offerings to every ‘Average Jane’.

With over 60,000 data sets collected from Canyon’s online ordering system revealing that yes women are generally smaller, but contrary to popular belief women’s legs are only marginally longer than men’s legs for a given height. However, their arms are consistently shorter (by 2cm on average) for a given torso length. According to Canyon’s data, women also tend to be shorter and lighter, and they have greater pelvic flexibility.

And so, enter the new Canyon WMN’s range. Designed with slightly higher stacks and shorter reach compared to the unisex frames, the new frames are also lighter than their unisex counterparts (due to women not needing the same level of stiffness), feature more aerodynamic profiles and their size range now extends down to 3XS for women shorter than 152cm.

Scaled-to-fit bikes feature 650b wheels to match smaller riders:
3XS and 2XS frame size options have been added to the new Canyon WMN range, with important changes such as reach, stack and seat angle all reworked to offer comfortable, yet agile handling. To keep design proportions consistent, the two smallest framesets feature 650B wheelsets, which Canyon guarantees will increase confidence in cornering and descents for smaller riders. DT Swisse wheelsets feature on the Endurace WMN CF SL with 25mm Schwalbe Pro One tyres. Interestingly, gear ratios have also been modified in the 3XS and 2XS sized bikes to accommodate for the smaller wheels.

Canyon says it has worked with its partners to ensure a steady supply of 650B wheels and tyres for road bikes, brands such as Reynolds (which feature on the higher spec models), SRAM and most recently announced at Eurobike this year Zipp adding 650B sizes to their range, don’t go thinking the unique size for a roadbike wheelset is a pitfall.

While I am a fraction too tall for testing out the 2XS frame and therefore the 650B wheels, I asked a friend. Currently riding a size 47 Trek and racing in the pro peloton she mentioned that she was unable to get the team bike because she was too short, that shorter stems always feature on her bikes and they definitely compromise the responsiveness of the bike, specifically in descending and cornering.

Disc brakes paired with value-for-money componentry
Designed with hydraulic disc brakes, Canyon have made their stance on the disc-brake debate clear. And while disc brakes still aren’t permitted at the highest level of domestic racing in Australia, I’m confident the historic decision isn’t too far off.

As perhaps a more tentative rider, I’ll admit I was excited to test out the disc brakes on a road bike for the first time. Added modulation and a confidence that these brakes have bite made every test ride on the Canyon Endurace a comfortable experience and while I was somewhat surprised how little difference I felt coming from rim brakes, it wasn’t until I went back to my regular rim-braked bike did I fell the differences and pitfalls this type of braking poses. For me, there’s no doubt my next bike will feature disc brakes.

The complete Canyon WMN range is disc-only; there are no models available with rim brakes, nor does Canyon plan to introduce them later. While this is somewhat of a pitfall for Australian domestic-level racing, for the average female rider and the target of the Endurace range, disc’s make sense.

Fitted with arguably one of the most reliable and smoothest groupset around- Shimano Ultegra gives the bike a value-for-money feel without compromising
quality. I had no qualms with aggressively shifting on the Endurace, which followed through consistently every time.

The Endurace range also features an aluminum options in Shimano 105 or Ultegra and maintains many of the same features on the top-end Endurace WMN, including internal cable routing, disc brakes, clearance for 33mm tyres and an aero fork and downtube.

Comfort to go the distance:
The Endurace was designed to be comfortable, and it certainly ticked that box for me. Even the Fizik Luce saddle, while known to be quite harsh, seemed to fit surprisingly nicely. The Endurace’s comfort primarily comes from a slight ‘leafe-like’ design at the base of the seat tube, known as a ‘comfort kink’. This is designed to give flex and absorb shock when hitting bumps in the road. Increased comfort capabilities, coupled with clearance for 33mm tyres gives the Endurace an adventure-encouraging vibe.

I made a special point when testing out the Endurace of finding gravel and slick surfaces, all of which the bike handled with rigor. In short, I would definitely buy this bike. Not to race or train on but rather to enjoy and be relied upon no matter the conditions, no matter the distance.

Summing up:
From her reliable componentry to her comfort-capabilities, the Canyon Endurace is a bike worth checking out, especially if you’re a shorter rider. Canyon’s attention to detail for those below 165cm really sheds a light on a part of the market often forgotten or rather simply given quick fixes. The addition of a 3XS size as well as 650B wheels and gear ratios to match will make all the difference in cornering and descending. While I was a fraction too tall to test these features, the Canyon Endurace still made an impact and encouraged me to ride outside no matter the conditions.

Performance:
While marketed as a road bike, with her 33mm fork clearance, disc brakes and comfort-focused design, the Endurace is open to adventuring on mixed-surfaces and gravel, which is what I did. The bike was reliable and nimble, responsive but not twitchy and really made for an enjoyable ride.

Value:
While you will have to pay someone to build this bike up (or do it yourself) the Canyon Endurace comes in at a reasonable price tag of $3599 to soften the blow.

Overall:
The Canyon Endurace WMN CF SL DISC 8.0 is a bike I’d certainly like to add to my collection. It’s more comfortable than any bike I’ve ridden and certainly lacks a certain sluggish nature other adventure/endurance bikes have. I really found it hard to fault this bike and found myself having to actively look for features I disliked. Disc brakes, paired with Shimano Ultegra mechanical make for an incredibly reliable ride where comfort hasn’t come at the compromise of performance or competitive edge. 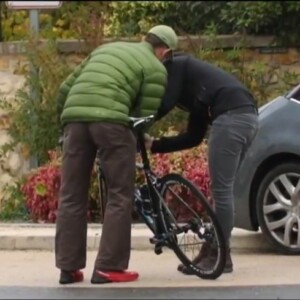 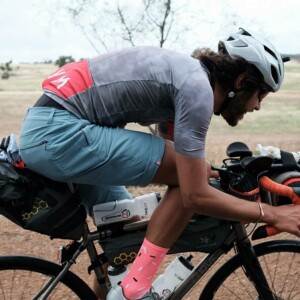