Cervelo have unveiled the 4th generation of the R5, a lighter, slicker more refined platform.

Headline features include a frame that is 130gr lighter than the previous model, a reduction of 16%. The new frame is 703gr and the new fork is 329gr, bringing the frame to just over the 1kg mark for the medium sized model.

Weight has also been shaved from the handlebar and stem, both 12gr lighter, and the seat post which is 20gr lighter than the previous model. A new integrated stem / bar, the HB13 and ST31 combo will also be specced on sister models the Caledonia-5 and Áspero-5.

The updates also include concealed cabling along with space for up to 34mm tyres.

The new R5 has already achieved some impressive victories, two stages at the 2021 Tour de France and the overall win at La Vuelta by Primoz Roglic.

Pro riders including Tom Dumoulin and Primoz Roglic, of Team Jumbo-Visma, had considerable input into the updated model, With Scott Roy, Cervelo’s Head Engineer, explaining some of the thinking behind the bike.

“In 2019, we started working on the bike,” he said. “I wanted to reduce the weight of the frame, because we were at the limit with the team. It was a struggle to hit 6.8 kg on that bike, and we needed to take some weight out of the bike.”

“(The R5) has never had any issues with compliance,” he continued. “We added compliance to this frame by dropping the top tube, but it was never a complaint with the old R5—at least in the rear. The front end stiffness is less dependent on the frame than it is the fork.”

“The FM117 R5 [the previous generation] was a classic road bike – it would do everything. With this we wanted to refine it to be a lightweight climber, and we needed to pull some weight out of the frame to get there. That was something we could tackle. There was a complaint from the teams, consistently, that the front end was too harsh and too stiff, which is, thankfully, a relatively easy thing to fix. We dialled back some head tube stiffness and refined the fork.

“We approached the FM117 fork the same way we approached the frame, where we wanted to maximise stiffness. So, the new fork, we kept lateral stiffness where it was, but we dialled back some longitudinal stiffness, that was the only thing from pro team/consumer feedback that we needed to address.

“We needed to reduce the surface area of the frame, which is exactly the opposite of what we wanted to do for FM117; the larger the cross sections [of carbon] in those down tubes, the more torsional stiffness they have—or bottom bracket stiffness. It’s all related, because as the tubes get larger, you have to add more material, and the weight goes up. We kept the bottom bracket septum from FM117, so it’s still stiff. We adjusted the trail slightly to compensate for a larger tire. It’s 1⁄2 mm, it’s marginal, I don’t know if it’s even noticeable. We kept the geo and the fit the same—it had to be a race bike.”

“Tom Dumoulin has spent the most time on it,” he continued. “He loves it. He was one of the vocal ones that had the front end complaints [about FM117], and he was like “this is fantastic now”.

Four different build levels will be available, along with a frameset only option. The builds include Shimano 12-speed Ultegra and Dura Ace plus SRAM AXS Force and Red.

The Shimano-equipped bikes do not have power meters. 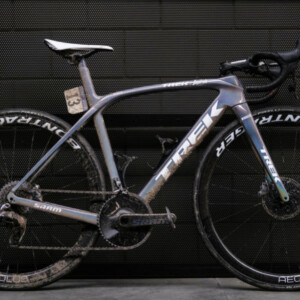