It’s a lap of France with a major twist, a 3-week epic that more resembles the race 100 years ago than it’s present day 3400km parcours.

But, more importantly than that, it’s shaping up to be one of the most successful solo fundraising rides ever.

Lachlan Morton has reached Paris after riding his own Tour – racing the peloton over every kilometre of the 2021 Tour course – plus the distances between stage starts and finishes – solo.

“I think the Tour de France is unattainable for 99.9% of athletes,” he said after arriving in Paris. “And, you know, you could buy a bike and put some bags on it and go tour France and there’s no one that can stop you.”

A fundraiser for World Bicycle Relief, the initial target was to raise the equivalent of $AU446,000 for the charity bike organisation. Eclipsing that total in the 2nd week, the target has now been increased to close to $AU750,000 with funds to purchase more than 2600 bikes already being raised.

You can track Lachlan’s final kilometres into Paris here https://alttour.ef.com

And you can donate to the WBR fundraiser here https://give.worldbicyclerelief.org/campaign/ef-rapha-for-wbr/c329966 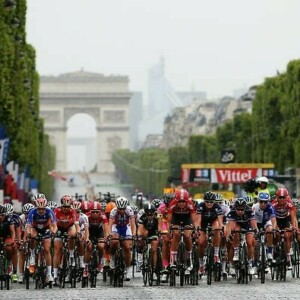