23yo stage race sensation Tadej Pogacar has enjoyed yet another major victory, the Slovenian winning the 2022 Tirreno Adriatico.

After a dominant display on Stage 6 which he won solo, Tadej Pogačar cemented his overall crown of the race for the second consecutive year. The big win came a week after he won the ’22 Strade Bianche.

Pogacar said he enjoyed the final stage and the race itself.

“I was focussed right up until the end as you have to be,” he said. “It’s never over until you cross the finish line. “The two stage victories were very beautiful,” he continued.

“Any race where you can get a victory is amazing. I’m delighted to get my second win here at Tirreno-Adriatico. I’ll take a couple of days rest now and look ahead to Milan-San Remo which will be the next challenge”.

Pogacar is scheduled to race this coming weekend’s Milan-San Remo. After that he will race his first Tour of Flanders, then the Ardennes Classics, the Tour de France and the Vuelta.

With 70 km of the 202km stage to go, the whole UAE Team Emirates chased down the 10-rider breakaway. Pogačar and his teammates were amongst the lead group in the final kilometre and with 500 meters to go he surged ahead to take the win.

“After the great work by the whole team, today I could only try to win and give my best,” he said after the podium presentation. ”We worked perfectly and everything went as we hoped. There are still three important stages in where we need to work hard, both tomorrow and especially in the one after which will be the queen stage. We have to stay focused and give our best.”

It was the fifth win of the season for Pogačar, who now leads the ’22 Tirreno-Adriatico plus holds the best young rider jersey. 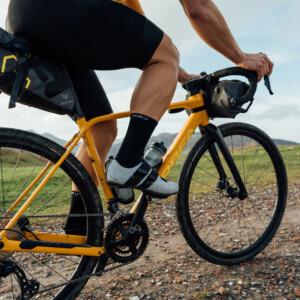