Orica-Scott sprint sensation Caleb Ewan powered to victory at the end of a shortened Stage 1 of the Santos Tour Down Under in 40+ degree heat today.

22yo Ewan comfortably crossed the line ahead of Danny Van Poppel (Team SKY) and Sam Bennett (Bora-Hansgrohe) to win in the historic Barossa town of Lyndoch.

Midway through the stage organisers announced the distance would be reduced by 26.5 kilometres, or one lap of the finishing circuit, due to extreme heat with hot winds and soaring temperatures above 40 degrees making conditions challenging for the 133 riders in the opening stage of the six day race.

“Everyone felt the heat out there today and to have the race shortened a little bit is what we needed,” said Ewan.

“I’m super happy to get that win because it was very tight in the end. A lot of riders ran out of gas in the lead out in that last straight because there was a lot of head wind there. Many riders misjudged it and it was a super messy sprint.”

Ewan, who also won the opening stage in 2016, says his ORICA-SCOTT team might not have the manpower to match some of the other teams but they are making tactics work in their favour.

“We have two ambitions in this Tour and we really have to use our guys conservatively and take the best out of them,” said Ewan who is sharing team support with Simon Gerrans who is hoping to defend his 2016 crown. “They did an amazing job at the end. It’s going to be a really nice feeling to have the leader’s jersey tomorrow.”

“At the start of the stage, the plan was to make the sprint with Peter [Sagan], and I was there to lead him out today but once we were into the stage, about 20km to 30km in, he asked me how I was feeling,” said Bennett. “I said I didn’t feel great, but he decided we would go for me. It’s a great compliment that Peter puts his trust in me.”

The decision to shorten the stage was welcomed by the peloton who found it tough to race at their full potential in the conditions.

“The safety and welfare of the riders, spectators and everyone involved with the race is always our primary concern,” said Race Director Mike Turtur.

“We consulted with rider representative Adam Hansen (Lotto Soudal) and with our Chief Commissaire Alexander Donike, and both agreed it would be sensible to shorten the stage distance.”

“I had quite a few riders speaking to me during the stage,” said Hansen. “When we were going slow, you could already feel the heat, but when we were going fast or making a hard effort, it was really too much. 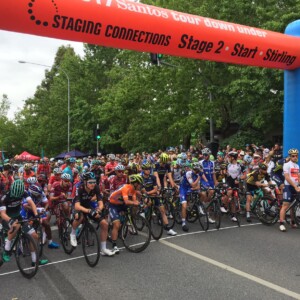