I use a calculator to work out spoke length. There are many of these on the internet and it is worth taking the time to find the one which suits you best. The inputs are the nipple seat diameter of the rim, the flange diameter(s) of the hub, the centre of hub to flange dimension for either side, the number of spokes and the cross pattern being used. There are a range of tools available to determine these values. So what cross pattern to use? 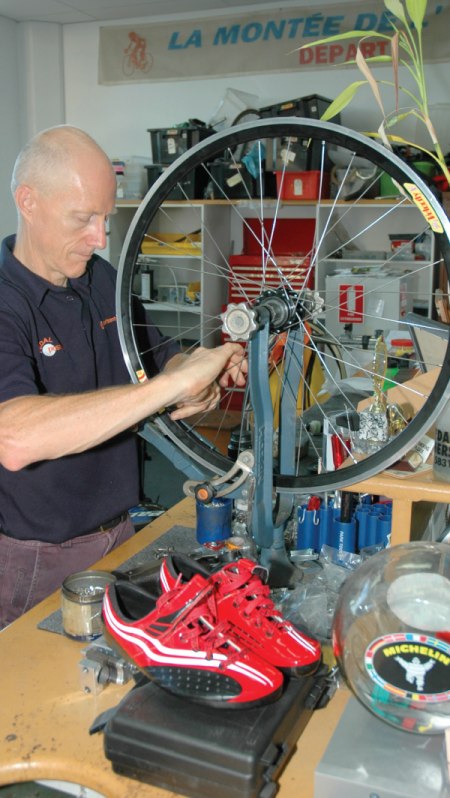 The answer to this question is contained in a seminal book named:The Bicycle Wheel by Jobst (pronounced Yopst) Brandt. Brandt built similar wheels with the only difference being cross pattern. He built radial, one cross, two cross, three cross and four cross versions and then tested the lateral deflection of each when held in a fixture with a fixed load applied. What he found is that radial and one cross pattern wheels have the least resistance to lateral loads and there is no discernible difference between two cross, three cross and four cross, though all are noticeably better than radial or one cross. I know what you’re thinking. You are thinking, why are spokes crossed at all? The answer is so that each spoke contacts one another. For instance a three cross wheel crosses three other spokes on its journey from hub flange to rim. It passes over the first two of these spokes and under the third pressing against it. This allows two things. Firstly transient stresses, like hitting a bump or a pothole, are spread over as many spokes as possible because each spoke is pressed against another. Secondly, while it is possible to build an adequate radially laced front wheel or the non drive side of a rear wheel, it isn’t possible to do this reliably on the drive side of a conventional hand built rear wheel. When the rider applies force to the pedals the torque load on the pedals is transferred by the chain to the rear cogs. This causes the spokes facing rearwards relative to direction of travel on the rear wheel to increase in tension. These are called pulling or dynamic spokes. It also causes the spokes facing forwards in relation to direction of travel to decrease in tension by the same amount.
These are called pushing or (inaccurately), static spokes. Simply, if a cross pattern with alternate forward and rearward facing spokes wasn’t used on the drive side of the rear wheel, then the forces applied to the rear hub by the rider applying pressure to the pedals would tear the hub out of the wheel. (Some aluminium spoked, high quality pre built wheels have radial drive side spoking but that is an entirely different story).
Another thing that Brandt experimented with was whether the pulling spokes should exit the hub to the outside or inside of the hub flange. As these are the spokes that are more highly stressed it makes sense for them to have the greatest separation and triangulation, which they achieve by exiting the hub to the outside of the flange. And so Brandt found. Some years ago, Mavic Service des Courses (Neutral Race Service), built several hundred pairs of 32 spoke wheels for race service using a variety of cross patterns and pushing spoke exit orientations and keeping a log of how the wheels fared over a Euro race season. They found similarly to Brandt, that the three cross rear wheels with pushing spokes exiting to the outside of the flange were the most reliable.
As a general recommendation three cross is the best option for 28, 32 and 36 spoke wheels. For 24 spoke wheels, two cross is best because using three cross would have the spoke bodies of some spokes running over the spoke heads of others causing extra stress and limiting durability. For 40 spoke tandem or loaded touring wheels, use four cross. Sometimes there are good reasons to depart from these recommendations but any good wheel builder will explain the why’s and wherefore’s when you are purchasing your wheels.
So Let’s Build a Wheel
So we have calculated spoke length and have separated the drive side spokes from the non drive side spokes. I place the nipple jar between them so that if interrupted, there will be no inadvertent mixing of lengths. Now I coat the spoke threads with 222 Loctite Threadlocker. This is not to stop the spoke nipples from unwinding. Sufficient and even spoke tension will take care of that. It is to prevent galvanic corrosion between the dissimilar metals of spoke and nipple. 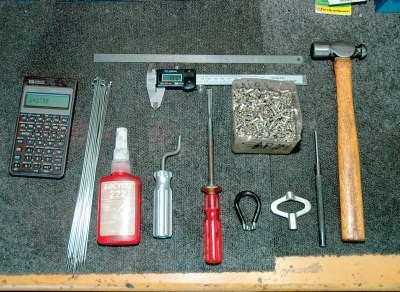 In the presence of water, the spoke and nipple will corrode together making any subsequent truing required during the life of the wheel, much more difficult than need be. Some people use oil or grease instead of 222, but oil and grease dry up and dissipate over time while 222 doesn’t. Loctite 245 works well too, but 222 has a property that 245 doesn’t. Any subsequent turning of the nipple during wheel truing at some future time will break the bond of 245 but will not affect 222. There are proprietary compounds from spoke manufacturers available too, but all are more expensive or work less well than 222 Loctite. I won’t waste space by describing the lacing process because it is simple and anyone can learn how with a little practice.
The flanges must be measured accurately to determine the correct spoke length: 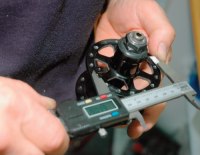 Lotice 222 will not bond until pressure is applied: 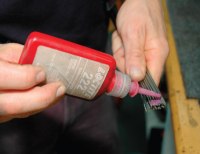 Anyone can learn lacing with a little practice: 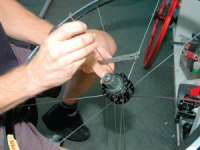 Ensuring the spokes are seated correctly in the hub: 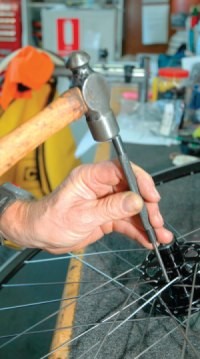