A tactical battle for much of the final 40km of the race, all eyes were on Olympic Champion Van Avermaet and two-time World Champion Peter Sagan as they tackled the 198km course complete with its 13 categorised climbs and 8 cobbled sectors. The winning time for the fast, furious and brutal 200km? 4:48:04.

“It’s an amazing feeling. Last year I started my year with a big victory,” an elated Van Avermaet said, shortly after comfortably beating Sagan in the final sprint.

“It’s always nice to come back and win your first race on home ground. For me it’s the perfect start of the season,” the Belgian added.

Sagan’s First Race Since Tour Down Under

Peter Sagan was pleased with his ride after a month away from racing and said it was a very tough race.

“I’m happy to be racing again after Australia,” he said.
“I worked a lot throughout the race, and we went to the finish in the first group and I just didn’t have the legs for the win. I had spent a lot of energy and it was hard to recover for the final sprint. I’ve worked hard these past few weeks, but it was one month without racing – it’s like a copy of last season, but it’s promising for the races to come. The season is long and has just started. I consider this race a very good training and I look forward to the upcoming races.”

Orica-Scott On Podium In Women’s Classic

ORICA-SCOTT’s Annemiek Van Vleuten finished on the podium in the 12th edition of the women’s Omloop Het Nieuwsblad, held prior to the men’s event.

Van Vleuten put in a strong performance to finish third behind Chantal Blaak of Boels-Dolmans and solo winner Lucinda Brand of Team Sunweb.

Orica-Scott women’s team Sport Director Gene Bates said her riders were at the front at all the right times.

“The plan was to always attack the Molenberg,” she said.
“They came over the top of that with four riders in the front and split the race in the cross winds afterwards. We had more numbers there than any other team so we were in a super position at that point.”

Bates said the girls put absolutely everything into the race.
“Getting third in the sprint is a super effort for Annemiek and does justice to the work they did all day. The feeling we had last year was that we were doing everything right but not nailing the podium so it is a nice feeling to start our first race in Europe with a great result like this.”

Tonight will bring the second Classic of the season, the 200km Kuurne-Brussels-Kuurne. 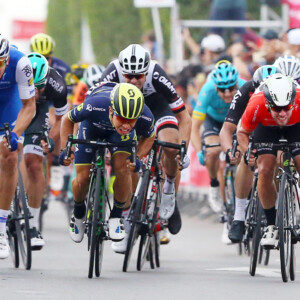