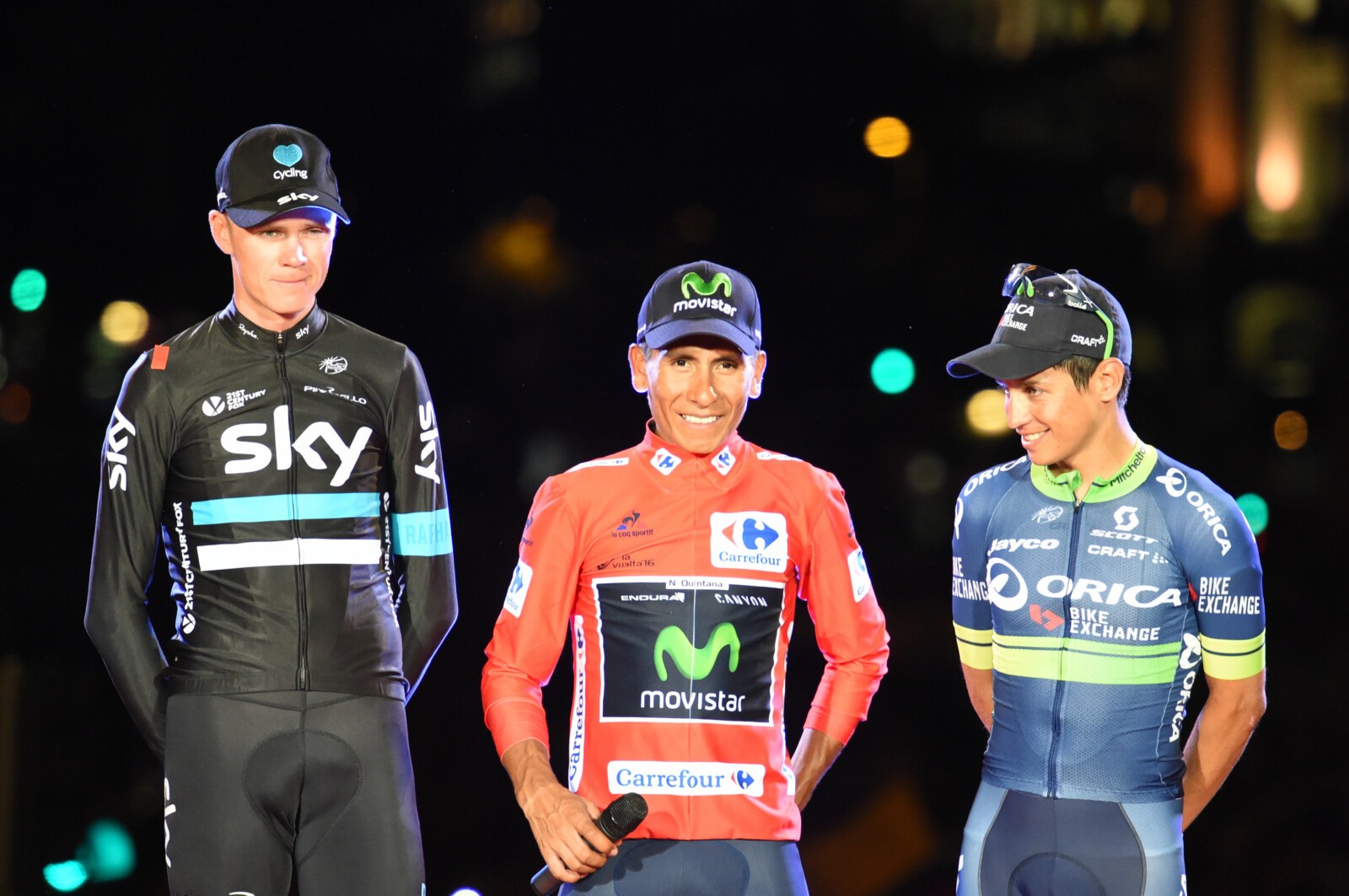 It was the popular 23-year-old’s second stage victory in his first-ever Grand Tour – he also won Stage 18. The Aussie outfit secured a total of 4 stages of the race with teammates Simon Yates taking Stage 6 and Jens Keukeleire Stage 12.

It’s Chaves’ second Grand Tour podium of 2016 following his second place at the Giro d’Italia in May. With fantastic support from teammates and a stunning Stage 20 performance, Chaves managed to snare the podium spot from a spirited and determined Alberto Contador by just 13 seconds. A changing of the guard? It’s sure starting to look like it.

“The objective this year for me and the team was to try to do two big tours strongly on the general classification and I think we did it,” said Chaves after the podium presentation.

“For the team, this is a really important one because we won four stages and had two riders in the top ten.”

Second at the Giro and 3rd at la Vuelta, Chaves was asked if he can one day make it to the top step.

“Why not, all is possible,” he said. “Things arrive when it’s time. This year it’s not my time, maybe next year, maybe in two years or maybe in three, you never know.”

“The most important thing is that you keep trying, you keep believing and continue to work and it will happen.”

Meanwhile in London 22-year-old Caleb Ewan won a thrilling sprint finish to claim the eighth and final stage of the Tour of Britain.
Racing a circuit-style course amidst the roar of thousands of cycling fans on the streets of central London, Caleb blitzed the field to win the final sprint by two bike lengths.

“I am super happy,” said Ewan at the finish.
“Its great to finally get the win after coming close a couple of times earlier in the race, it all worked out perfectly today.”
“It was a short but really fast stage that definitely suited me. The guys did a great job of keeping me in position and thankfully I was able to finish it off.”

“It’s been a hard race, a really hard race actually but I am pretty happy with how I have raced and the form I have shown this week,” said Dennis after the final stage. “In hindsight I probably lost the race on Stage 2 but in saying that if I didn’t attack up The Struggle I wouldn’t have been as confident on the other climbs throughout the week,”

Rohan Dennis said he was looking forward to forth coming races including the Eneco Tour and the World TTT Championships.

The event, to be raced on a course that best suits the sprinters, will be raced in Doha on Sunday October 15. Speaking to Cycling News after the completion of the Tour of Britain, Cavendish said “The Worlds, I want to win the Worlds.”

“I don’t think anyone has ever won the track and road Worlds in the same year,” he said.
“To be able to do that would be quite a big thing. We’ve got the team to do it.”

“I don’t think I could go and win the Worlds if I was on my own,” Cavendish said.
“I think that with the team we have now, the riders we have in Great Britain, I truly believe that we’ll be the strongest nation going to win the World Championships this year.”

Sagan crossed the line just ahead of Olympic Road Race Gold medal winner Greg Van Avermaet of team BMC. Aussie Michael Matthews of Orica-Bike Exchange was among riders to contest the sprint with ‘Bling’ finishing less than a second back in 5th.

“I am very happy and must thank all my teammates as they worked really hard today,” said Sagan after his 8th WorldTour victory of 2016.
“It was unbelievable because I didn’t feel very good during the race, and I was getting cramps in the legs but they passed and I’m really happy to take the win. For sure I didn’t expect that I could win today.”