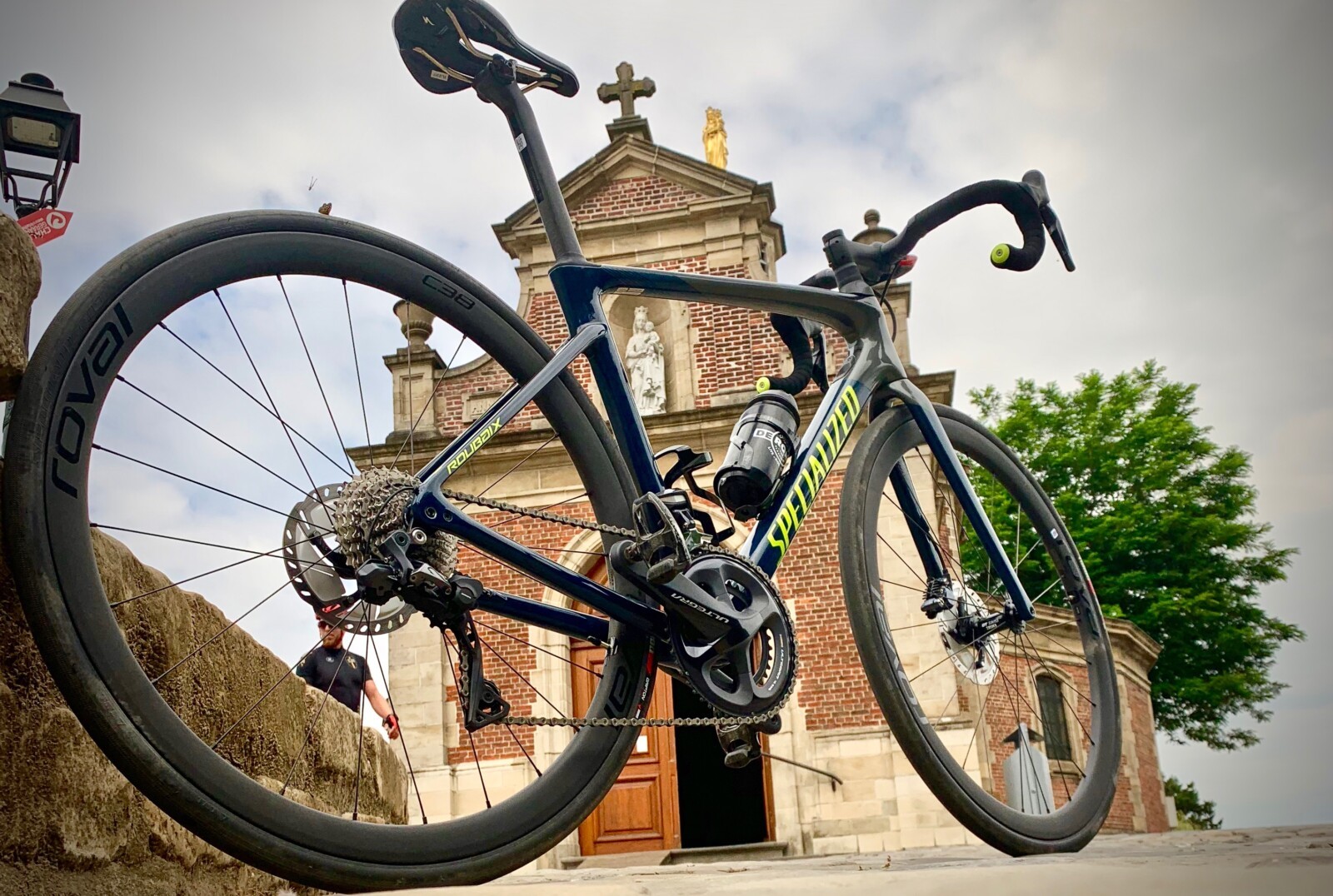 Cobbles. The mere thought of them conjures up excitement, anticipation, sweaty palms and dreams of adventure. Flanders is the home of cobbles so that’s where we reviewed the latest Roubaix from Specialized.

With a forthcoming trip to the absolute heartland of cobbles – the Flanders region of Belgium – the plan was hatched. An eager call to the team at Specialized Australia and within a few days the idea was confirmed, locked and loaded.

We would fly to Europe with the latest Roubaix – an ‘Expert’ spec level bike with Ultegra Di2, Roval C38 wheels and Specialized Turbo Pro 28mm tyres. To complete the package we also took a pair of S-Works 7 Road Shoes and a the companies premium helmet, the uber-impressive S-Works Prevail ii with ANGi (see separate reviews on this site.)

Upon opening the bike box 16,500km from Sydney the blue/charcoal Roubaix was gleaming…the bike was carefully and rather excitedly assembled that evening with tyres pumped, hex bolt tensions checked, future shocked dialled in and the Di2 put on overnight charge.

Next morning and it wasn’t long before the Roubaix was bouncing along over a cobbled sector at speed. And it was instantly apparent that Specialized’s often quoted line of ‘smoother is faster’ packs way more substance than a slick three-word slogan – it’s a statement of fact!

Enjoying that first local loop out of Oudenaarde, a ride that took in the legendary cobbled climbs of the Kwaremont, Patterberg and Koppenberg, the Roubaix was the perfect platform for this high-intensity dream destination, heart-starter.

The fact that this bike has a suspension dial on top of the stem is no gimmick. Twist it half a turn left for more compliance and to the right for minimal shock absorption, the new and dramatically enhanced Future Shock 2.0 system delivers 20mm of hydraulic dampening that, as Specialized say, ‘suspends the rider and not the bike’.

Look at the bike side on and you’ll see a boxed section on top of the seat stay along with a refined seat post design. First to the seatpost, this is Specialized’s new ‘Pave’ design, an incarnation of the former ‘Cobbler Gobbler’ post designed to absorb shock and provide more comfort. In addition to this is that aforementioned box section – a void above the hidden internal seat clamp that provides extra for and aft compliance due to to top of the seat post sitting free of the frame.

How does it all come together? Well in conjunction with the FutureShock 2.0, and floating on 28mm tyres paired to the 38mm Roval carbon wheels, super comfortable, highly compliant and exceptionally smooth – in fact the term ‘armchair ride’ came to mind during the first few days of that dream week exploring the notoriously rough roads of Flanders.

A true all-rounder, the platform proved itself not just over the uneven country lanes, gravel segments and cobbled sectors, but also at speed with the locals and fellow visitors along the ‘Scheldt’.

It’s an 80 or so kilometre loop to Gent, a stunning city that simply should be way up top of any itinerary for those visiting Belgium.
Enjoying the relatively flat ride along the peaceful Scheldt riverside bike path, the approaching cacophony of rubber and direct voices became more obvious by the second. A peloton, and a significant one, at speed. I accelerated away from my ride partner in anticipation of the arrival of the bunch, the plan being to tack onto the back and stick with them for as long as possible.
Moments later the bunch zinged past. Random colourful kit from around the world was punctuated by current Pro Continental & WorldTour jerseys – and the genuine articles as it turned out.

Pushing hard to catch the back of the bunch it struck me that the same bike that was so comfortably gliding over the cobbles of De Muur the day before was now accelerating through 50kph on a smooth bitumen path with what could affectionately be described as ‘the bunch from hell’.

‘This bike can do it all,’ I thought while sitting on, catching breath and preparing the challenge of moving up through the focused but friendly riders. ‘Same tyres, same compliance via Future Shock 2.0, same gearing, super capable and ridiculously easy to ride…this thing’s just proven itself,’ I thought a short time after sitting between amiable Wolfpack, Astana and Drapac riders.

It was a surreal moment to be scooting along on the Oudenaarde-Gent express, on the Roubaix, mixing it with a peloton packed with mid to high-end road bikes and similarly accomplished pros.

With a frame lighter than the Venge (900g in size 56cm) and more aero than the Tarmac (as tested in the company’s ‘Win Tunnel’), the Roubaix is a truly impressive release. Not only have engineers incorporated aero shaping (for a claimed saving of 20+ seconds over 40km), they have also opted to make the bike gender neutral.

Unlike previous model Roubaix (male) and Ruby (female specific) models, the new Roubaix features a shared geometry that Specialized say is the result of research from more than 8,000 bike fits.
The test Roubaix came fitted with a unisex Specialized power saddle, one I found perfectly comfortable and visually in keeping with the sleek, minimalist and functional lines of the bike.

To the handlebars and the Roubaix features the company’s ‘hover’ bar with 15mm of rise either size of the stem. This made for a comfortable, endurance style riding position and was perfectly comfortable for the duration of the test

Back to that catchy three word slogan and yes, smoother certainly feels faster. The bike clung to the road whether it be harsh cobbled climbs, gravel backroads, the single lane concrete paths that criss-cross rural Flanders or the smooth blacktop riverside run.

To that final morning and the bike was dismantled and boxed up a lot slower and with a lot less gusto than it had been assembled some 10 days earlier.

The Roubaix was one of those review bikes we certainly would have been very happy to keep for a year (or more). Delivering it back to the local dealer in Sydney was like farewelling an old friend – make no mistakes the latest Roubaix is a bike you will grow close to an no doubt create many happy memories with.

We found this bike to be exceptionally smooth, super comfortable and incredibly versatile. It’s a capable bike that not only looks great but is ready to head most places you point it.

Performance
As mentioned above – a capable machine and very versatile. Whether it be on a cobbled climb or fast ride with the local bunch the Roubaix is a genuine all-rounder

Finish
The only minor issue we had – as ironic as it seems – was the Future Shock adjustment dial coming off on the first cobbled sector. This was re-secured later in the day (via 1.5mm hex key). Other than that minor irony the finish of the bike (in blue and silver) was spot on.

Overall
The latest Roubaix is a huge step forward for the model line, a giant leap from the previous incarnation. It’s a standout release, a super-impressive offering. One only wonders what the company could do to improve it next year. 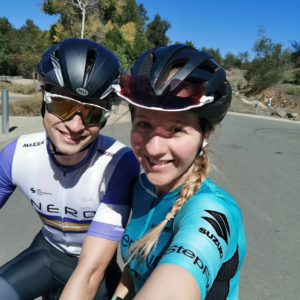 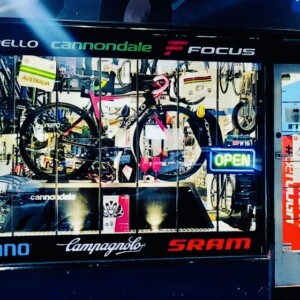