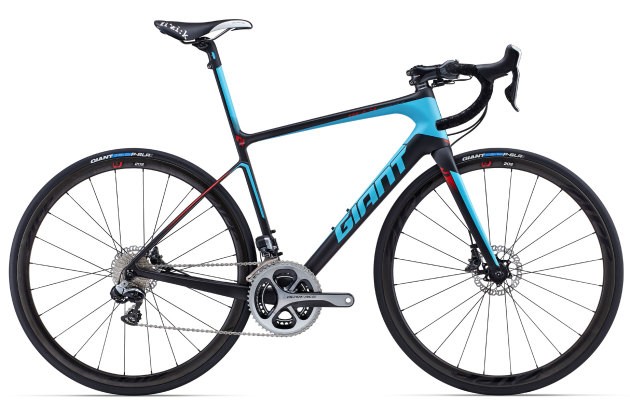 Now in its seventh year the Defy has been rebuilt from ground up with all new tube shapes, an integrated seatpost (ISP), new wheels and even new graphics. Arguably the biggest change for the Defy is the inclusion of Shimano’s hydraulic disc brakes. The endurance oriented geometry of the bike however remains unchanged, as Giant has determined this to be ideal for the endurance road category.

Four criterion were the basis of the new design; control, weight, stiffness and compliance; pretty standard ideals for high end road bikes. In the process of fleshing out these goals for the Defy, head designer for Giant, Jon Swanson said, “Anything we do needs to be authentic; no gimmicks, no fluff, no bullshit, no little things stuck in…just keep it clean; very much to the point. A purely engineered product”.

And so it is; just a clean, straightforward modern looking frame, with all cables and hoses internally routed bar the front brake hose, no gimmicks, no fluff.  The graphics have also been amped up with a new blue colour that’s more neon for extra punch and contrast, and the Giant logo font on the down tube has been tweaked marginally to bring it up to date.

The weight of a bike plays a big role in its performance. It also plays a part in the rider’s perception of how that bike performs. Giant knows this and as such one of their key goals is to create frames that perform, but which are also remarkably light. Given this weight minimisation goal the addition of disc brake tabs to a frame is problematic, as adding disc mounts will usually bring a weight penalty. However the weight reduction goals Giant had for the Defy actually saw them create a lighter disc brake ready frame. 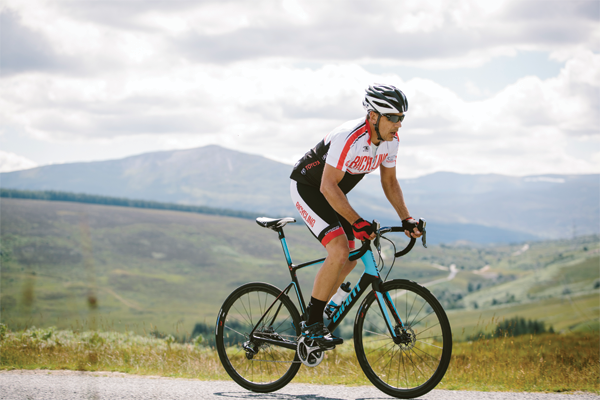 The guys in our office were discussing it one morning recently; a lightweight frame just feels good to ride. The way they move, climb, accelerate and integrate with you riding it – whether its reality or placebo induced, it’s a good feeling.

The Advanced SL Defy is the lightest road frame Giant has ever made at 890g for a medium size with an ISP.

In addition to reducing weight of the frame, an overall centre of gravity benefit has been achieved in the new design. Andrew Juskaitis, Giant’s senior product marketing manager noted “In terms of road product, the new Defy Advanced SL carries a higher percentage of its weight lower-down than any other product we’ve ever produced.

Because we’ve moved the braking system from the fork arch and seatstay junction) to the fork dropout area and rear chainstay, we were able to lower the overall center of gravity of the Defy Advanced SL considerably. As you know, a lower center of gravity aids in overall handling and, hence, control.” 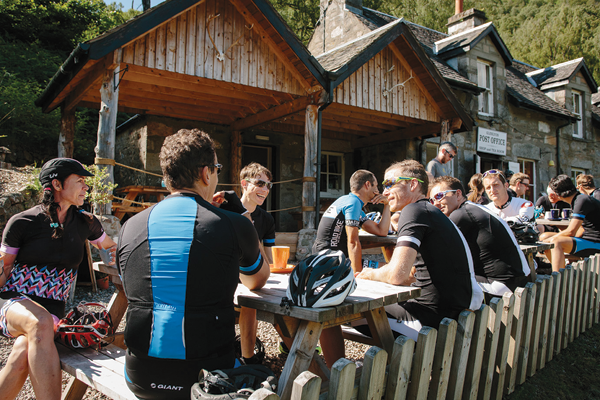 They have shaved weight from areas like cable ports by routing rear cables through the head tube (which is already heavily reinforced and can cope with a port) while thinner tubes like the top tube— where they previously had cable ports—need bulking up to cope with the hole. They have removed the rear brake mounting bridge to save a few grams, and the D-Fuse ISP also cuts weight. They even made hollow carbon dropouts for the new design. While some brands are opting for wind up axles, Swanson is adamant they are completely overbuilt for road bikes – quick releases skewers also weigh less which fits nicely with the light bike objective.

The saddle clamp too has been designed with weight shaving in mind. It’s a slim, lightweight unit that allows 25mm adjustment after the seat tube has been cut. 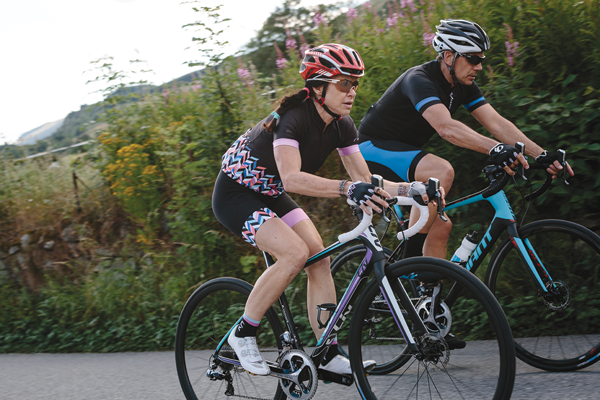 Giant deliberately chose our test location in the Scottish highlands for the roads and the weather. “Come mentally, physically, and spiritually prepared for two days of rough riding in the rain,” they said. Rain was surely a given, and they wanted the rough roads so we’d be able to experience the level of compliance they have been able to build into this frame. (They could scarcely have chosen a place further away from Australia. Technically I think Campbell Island, south of NZ is the closest landmass to the antipode of the central Scottish highlands! But Campbell is just a stone’s throw from here.) The roads in places were so rough that we lost several bidons along the way, but the damaged pavement did make it easy to feel the damping this bike affords, especially through the back end of the frame and seatpost. Giant claims the D-Fuse ISP will flex up to 12mm, taking the sting out of potholes and heavy impacts.

An off-the-bike test where we videoed someone leaning heavily on and off the post while the brakes were engaged, backed up this claim, clearly showing the post deflecting significantly under a decent load. And after a couple of hundred kilometres’ riding over two days on this rugged pavement I can gladly vouch for the vertical compliance of this frame. 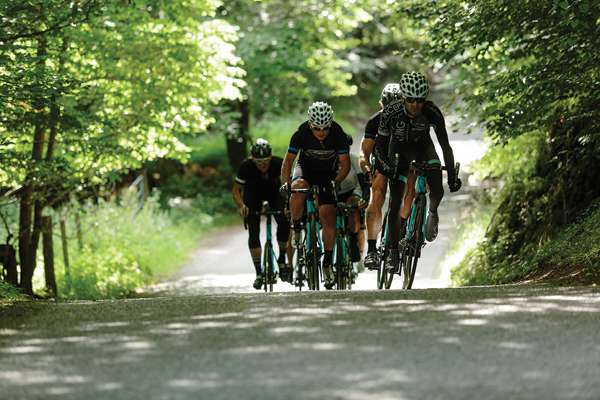 Part of the compliance is derived through the seat stays and their fixing point. The top half of the seat stays is flattened to allow a level of ‘leaf spring’ action to defray some of the vertical forces before they hit the seat tube. Giant says they are as slender as they can make them and still be hollow. The junction with the seat tube has been positioned to achieve maximum dispersion of vibration through the frame. Discussing the frame before a ride, Swanson says that “any higher and the forces are not dispersed but take the route of least resistance and travel up the seat tube into the rider, while a lower fixing would result in lower rear triangle stiffness which would mean decreased power delivery”.  Meanwhile, up front the fork legs have been slimmed down and curved a little to add a touch more compliance to the overall package.

Ideally we would have had some of that usual Scottish highland weather to test the disc brakes but instead we had sunshine and blue skies for the duration. For the record the brakes performed very well with good stopping power and easy modulation in dry weather—much as we expected. It’d be interesting to see how the immediacy and high level of braking power of disc brakes interacts with the reduced adhesion of a wet road and the small contact patch of road tyres. The main variable in the equation is the instantaneous yet controllable power of hydraulic discs, as good calliper brakes will also deliver enough power to lock a wheel in the dry but wet rim brakes take a while to engage and can sometimes be a bit baulky as they dry. But with all that stopping power so readily available some discretion would be needed in the wet to prevent lock ups. 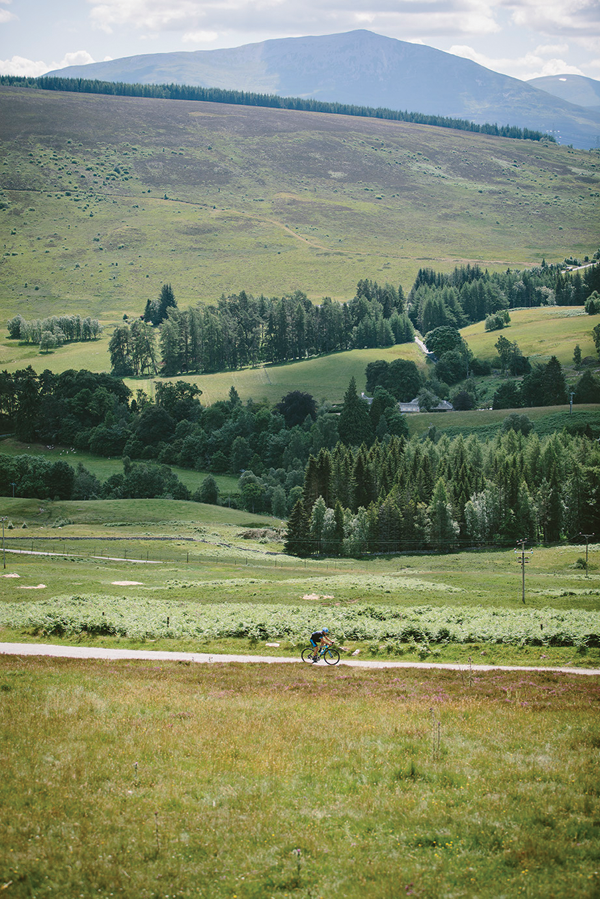 Shimano recommends 140mm six bolt rotors for the Defy. The rotors themselves are made by an aftermarket factory with Giant’s patented perforation profile. The proprietary cut out design is optimised for maximum cooling benefit and mates perfectly with Shimano’s Ice-Tech disc calliper set up. I found the hydraulic brakes a really good fit with the bike; easy, confident, one-fingered braking which let me keep a good grip on the bars over some unfamiliar, and occasionally, surprisingly rough roads. The disc setup also allows for easy adoption of wider tyre choices; the fork and rear end look like they’d easily handle 28mm rubber and maybe even 30s at a squeeze.

The rough roads outed a rattle in the front end of my bike from an internally routed cable or hose. When I discussed this, Giant’s response was these test bikes were not off the standard production line, and the routing may have been performed incorrectly, perhaps over the BB instead of under, bringing the cable too close to the frame and introducing some slack in the line. The resolution would be a simple fix, whether routing correctly or installing a foam shroud in the tubes or similar. It was a bit distracting at first but despite the noise the bike itself felt well controlled and stable throughout the test over rough roads and through chattery corners. 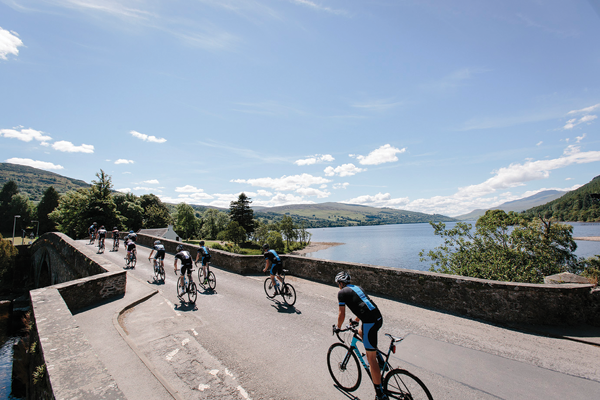 The whole bottom end of the bike is chunky and solid. From the asymmetric chainstays, through the 86mm wide bottom bracket and the oversized down tube, to the massive steerer and head tube, the frame is built to deliver good power transfer and steering control whatever the road throws at you.

Sprinting and climbing on the Defy is fun and responsive. Out of the saddle efforts smashing the pedals results in snappy acceleration, each stroke making the bike jump forward. We also had some long sustained runs on undulating roads alongside the glassy lochs with some of the guys driving at good speed on the front of the bunch; again, it was great fun pushing the pace on these new machines. 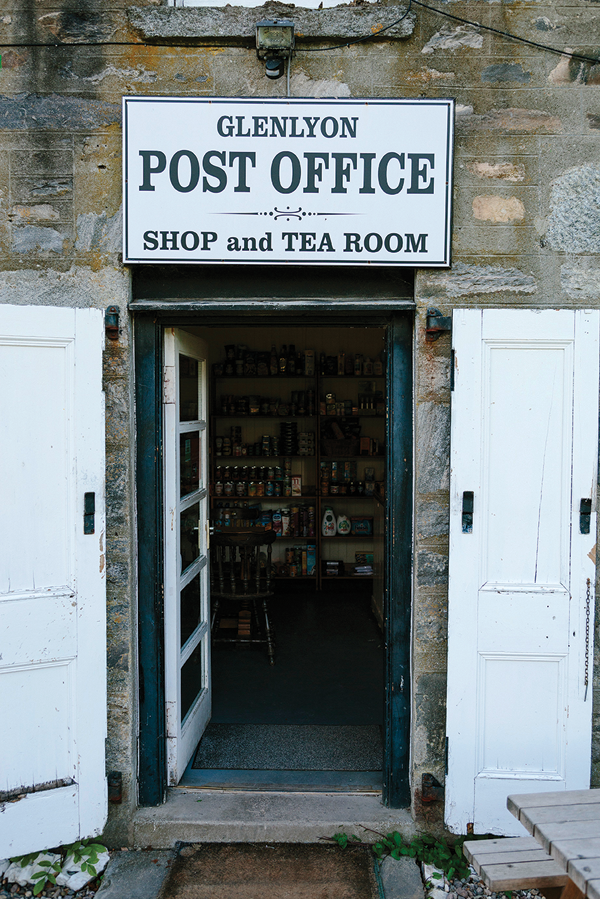 The Defy Advanced SL 0 is a class piece of bicycle engineering. Its clean lines and those Zipp 202 carbon wheels with disc rotors gleaming really look the goods. It’s light and stiff and has a good level of compliance to keep you feeling fresh for longer. Riders looking for a top quality frame with elite component spec will appreciate the Defy. Regardless of whether it’s one of your long, informal afternoon forays in the back country, or you are pushing your limits competing in gran fondos and sportive rides, the Defy SL 0 will make the ride a pleasure and push you to perform at your best. 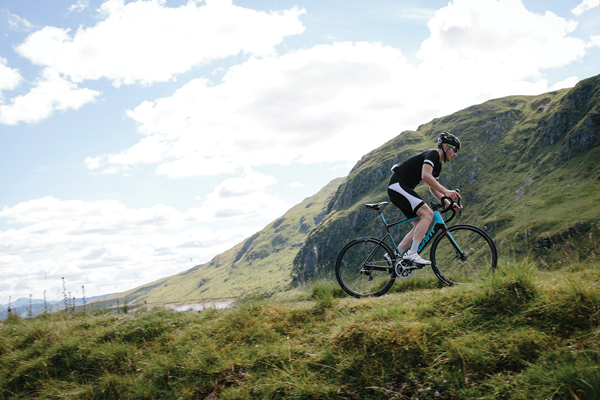 Full range and pricing at www.giant-bicycles.com/en-au/ 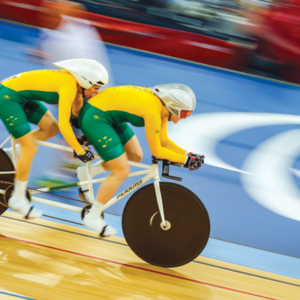 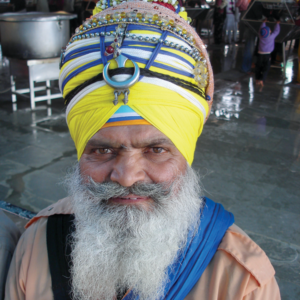