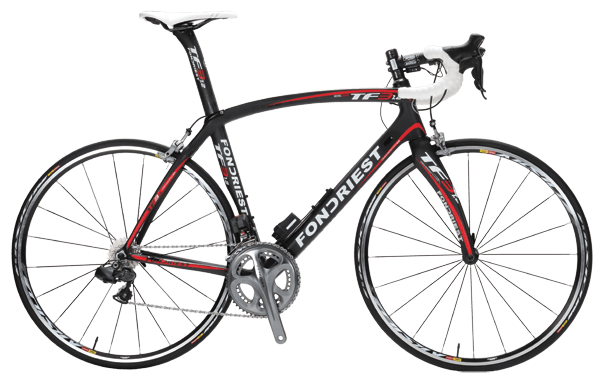 OK, let’s get one thing out of the way before we begin. This is a really, really good looking bike. There, I’ve said it. To my eye, everything from the matt black finish, the bulky curves and the sweep of the top tube is excellent. If you gave me a pencil and told me to sit down at a bench and design a bicycle shape, this is pretty close to what I’d come up with. Except my lines would probably be a lot more wobbly.

If you’re thinking you’ve seen this Fondriest before, then you’re kind of right. Fondriest used to sponsor the now defunct Amica Chips Pro Continental team with the Original TF1 frame. You may have seen that bike underneath Aussie rider Simon Clarke in the features we’ve done on him, and you may also remember the review we did on the Fondriest TF2 back in the dear distant days of 2009. Looking at the shapes here, particularly the top tube, I’m guessing they may be using the same moulds on this bike, or at any rate, similar moulds. But as we shall see, the layup is a little different.

The other place you may have seen this bike was during the 2012 Road World Championships under the winner of the U23 Men’s road race, Matej Mohoric of Slovakia. Yep, the World Champion won on this frame which in itself should speak volumes about the quality on offer here. It also makes a bit of a misnomer of the grouping of Fondriest’s fleet of bikes which run from the Zero, Team, TF2.1 and TF3. It mistakenly suggests that the TF3 is a lesser bike. I found exactly the opposite.

The heart of the TF3 1.2 is the frame. I mentioned before that it had a different carbon layup to previous incarnations. This model uses a Toray-manufactured 50 Ton tensile carbon. It contains additional ribbing in the bottom bracket area, which gives the bike a lot of stiffness. The combination of these fibres with the ribbing is something you’re more likely to see on a more expensive bike. Claimed weight for the medium sized frame is 980g and an extra 370g for the fork. You also need to add another 240g for the seatpost. This fork, by the way, has been re-designed. It’s much wider and chunkier near the top to provide a lot of stiffness when steering. The ‘wings’ are also channelled to bring the wind into the all important downtube area in order to keep the bike slicing through. 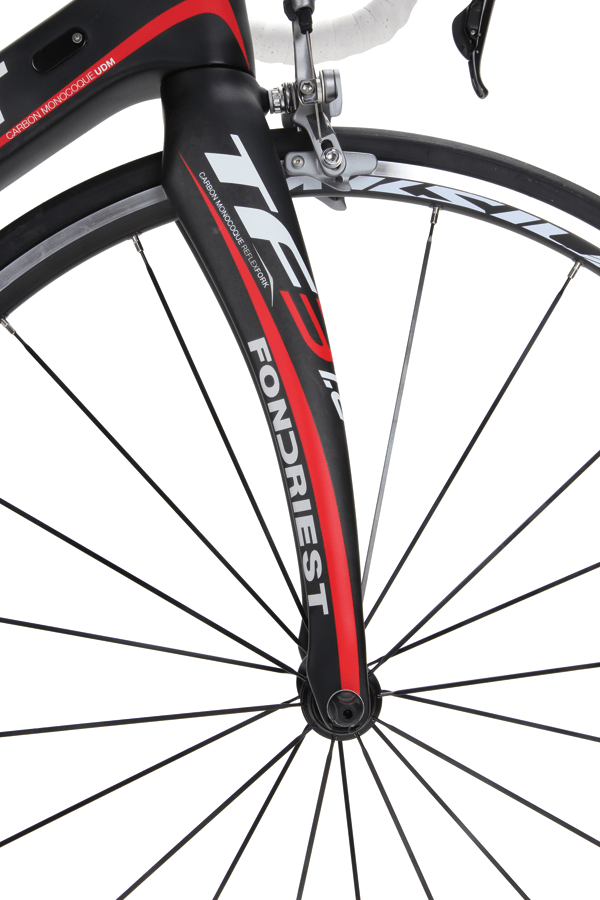 The TF3 also sports an interesting feature that Fondriest call ‘steering differentiated integrated cables’. This involves a reduction in the cable sheaths where the gear cables enter the frame. This point is quite high up, right at the junction of the tube. In addition, the point where the cables have to be routed past the bottom bracket to the derailleurs is rather neatly done with a guide that is integrated into the bottom bracket. It’s all very nice but completely irrelevant to this test because our bike was specc’d with Shimano’s Ultegra Di2 system. If you’re running mechanical however I guess it’s nice to have. We did have a small concern with the left brake cable which was very rough through the frame. Some tender loving care and lubricant in the vital points took care of this problem and when we reported the matter to Fondriest they said they would be ‘taking it up with the factory’.

Apart from the Ultegra Di2 this bike came with Mavic Aksium wheels, FSA bar and stem, Mavic’s Aksion tyres and a Selle Italia saddle. It has to be said that these wheels, while keeping the price ‘down’ do add a certain amount of weight to the overall package. A shade under 1,800g in fact. There’s been a bit of discussion happening in the Bicycling Australia office of late whether the old ‘the worst weight to have is in the rotating mass’ question. We’ve been calling in a number of experts but the jury is still out. Still, if you’re climbing, any weight isn’t going to help. On the plus side with the Aksiums, you get a bombproof wheelset that rolls very well, particularly once up to speed. You’re not going to win any standing start competitions with these, but at the same time, you’re not going to be pulling your anchor on the open road either.  The tyres are also of the ‘workman like’ variety. They have a single casing and are fine for everyday riding. 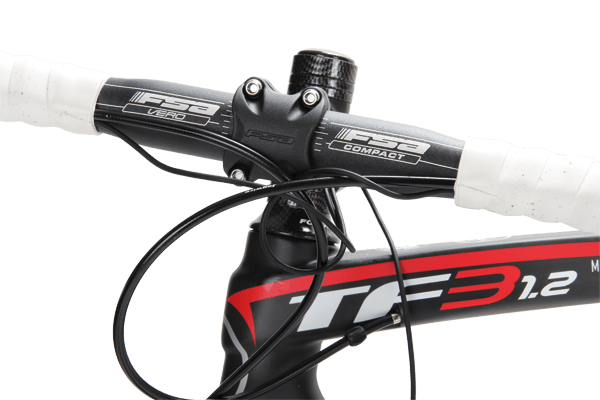 The FSA bar and stem is a pretty basic affair. They’re aluminium and do their job without being fancy. My personal opinion is that their non-special looks (silver paint on textured aluminium) probably if anything, detracts from the overall look of the package. However, they’re comfortable and workmanlike and again, probably keep the bike affordable.

This bike was ridden by two people in the office, myself and one other. The other indicated that he really didn’t like the saddle. He said it was a very harsh ride. I thought it was OK and didn’t really think about it after a minute or two. As a point of comparison, we both ride Prologo saddles on our personal bikes. However his is a Prologo Scratch, which is a wide, traditional shape, while I ride a Prologo Nago, which is flatter and has less of a kick. The lesson, at this level there are plenty of saddle options and you need a bit of trial and error to find the one you like.

I have to give full credit to the designers of the TF3 1.2. I very much enjoyed riding this bike. The frame is responsive and wants to go fast. It doesn’t have the sharp kick in it, that rock hardness that you get from a pro frame for example, but it’s still pretty damn good. You can ride this bike fast, or you can ride it slow. You can climb comfortably, and it steers well on the descent. I felt riding the Fondriest that if anything, the frame was better than the sum total of its parts. It was a bit like a horse wanting to break out of its harness, so it’s tempting to say that an upgrade of the wheels would make a big difference. But it’s pointless. Any bike with upgraded wheels is going to perform better so I need to review what it comes with, not what you can add to it later on. The point here is that this bike rides well without the upgrade. It’s a sound, pleasurable machine. 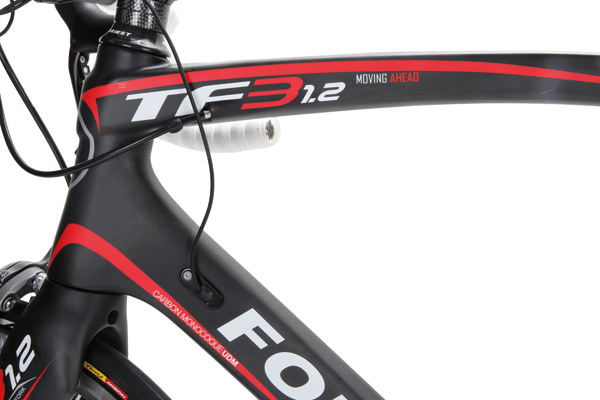 If I had one beef at all it was with the seatpost and clamp. You’ll notice that the sweep of the top tube means that the point where the seatpost comes out of the frame is a little lower than usual. This means that if you have long legs (like myself), you may have trouble getting the correct seat height. Despite the top tube being the correct length for me I had to ride with the seatpost slightly above the minimum insertion line. We had a similar problem with the TF2 we tested a few years ago so it would be nice to see Fondriest supply a longer post.

There was also a small amount of slipping from the seatclamp. This could have had something to do with the extra extension as the other rider (who is shorter than me) reported none at all. You never quite know with aero seatposts how much of the clamp is actually putting pressure on the post.

Apart from these niggles I enjoyed the Fondriest TF3 1.2. The frame is a race winner and looks the goods as well. Personally I would be very surprised if this model isn’t Fondriest’s biggest seller in 2012-2013.

The Fondriest TF3 1.2 is an excellent bike, particularly the frame. With an upgrade or two you could have a fast racer, but should you not wish to race you can leave it as it is happy in the knowledge that you’re riding a very good machine. 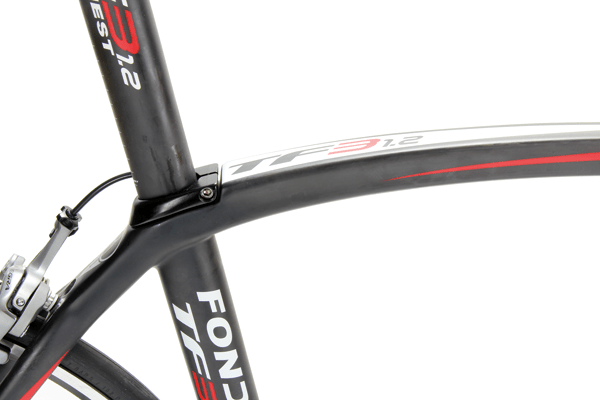 Excellent. You can really feel the quality of the frame as you ride along. It’s sharp while remaining comfortable. The wheel and tyre combo is a little heavy, but they’re predictable and roll very well on the flat or downhill. Climbing there’s a small weight penalty, but not much. Riding this bike was predictable and a pleasure.

At around four and a half thousand this bike is at the high end of the Ultegra Di2 market. However it is a brilliant frame and riding this bike is a pleasure. There are less expensive bikes out there with similar componentry, but there’s still something special about this one.

Fondriest have done a lot of work with this frame and I think they’ve come up with the goods. It rides well, it looks fantastic and will repay any upgrades. Expect to see a few of these on your local roads in the coming months. 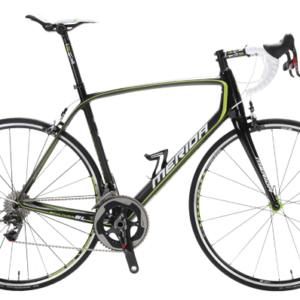