It may seem like heresy, but the Bottecchia Super 8Avio was a bit of an enigma to me when I first came across it. The brand was unfamiliar and, for a start, how exactly do you say the name? Bottecchia is the easy bit, but is that the ‘eight-avio’ model? Getting to the bottom of this was easy with a bit of research and revealed an interesting snippet of cycling history.

Ottavio (anglicised as Octavio, with ‘Oct’ being the ‘8’ in the model name) Bottecchia was an Italian cyclist of the 1920s. In fact, he was the first Italian to win the Tour de France (1924, after a second place the previous year) and again in 1925. Then, in 1927, Bottecchia was found dead by an Italian roadside, his skull crushed by a rock and his bicycle propped up against a wall. Circumstances surrounding his death have remained a mystery ever since.

Bottecchia had been working with bicycle frame builder Teodoro Carnielli and it is Carnielli’s family company that still manufactures Bottecchia bicycles today. So, there is quite a long pedigree to the Bottecchia brand.

On paper, one of the highlights of the Super 8Avio is the full Shimano Ultegra Di2 groupset. This was my first encounter with Di2 electronic gear shifting and I was, to be honest, a bit wary of it. Shifting with cables has been around for a long time and works pretty well, right? How much better can the electronic system be? To start with, the shifter ‘buttons’ are really just machined areas on the brake lever. They are positioned just where you’d push the lever on a traditional set-up so changing gear is very intuitive if you’ve come from a Shimano cable system. In use, the rear derailleur shifted perfectly and I was suitably impressed. The system never missed a beat at the back and I soon forgot about it being different. It worked brilliantly and with less effort than cables. 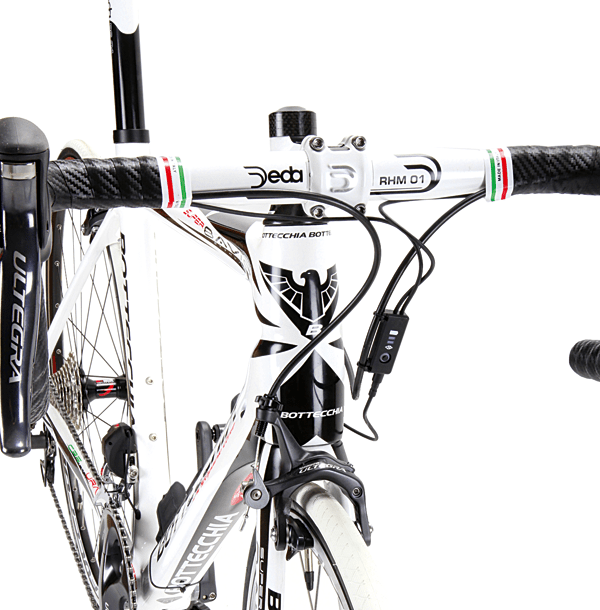 Initially, the front derailleur was a different animal entirely. Gear changes were quick and accurate but the automatic trim feature (which adjusts the position of the derailleur cage to clear the chain depending on which sprocket you are using at the back) was less than perfect. Chain rub was very obvious in a number of gears. Not having a clue about how to adjust the unit, I admitted defeat and dropped the bike in to my favourite shop where the derailleur was re-fitted. The transformation was immediate and obvious. Perfect shifting with minimal effort, and zero chain rub in any gear combination, even the extreme big ring/big sprocket and small ring/small sprocket combinations which I’d normally avoid. The lesson? Shimano have done their homework when it comes to electronic shifting so if you have a problem it more than likely to be in the set-up. I’m sure there are those out there who’d be quite happy never to have electronic gear-shifts. I was one of them! It’s a bit clinical – there’s no real feedback through the lever as to what’s happening at the derailleur. But the essential point is there doesn’t need to be. I found myself changing gear more than usual, particularly at the front, because it worked so well. I wouldn’t upgrade an existing bike but I’d go for it on a new one. I suspect that in a few years I won’t even have a choice.

The Super 8Atavio has a standard 53/39 crankset and a 12/27 cassette. I appreciated the spread of gears at the back, with the 27-tooth sprocket providing a comfortable option for longer and steeper climbs. As for the rest of the groupset, the grey anodising looks sharp and the brakes were excellent. I’m not sure I like the look of the Di2 shifters but that’s a small point. Similar to most electronic equipped bikes on the market, the battery pack for the Di2 is mounted to the down tube below the bottle cage and shares the mounting screws. There’s also a zip-tie clamping the bottom of the battery pack. This looks a bit like an afterthought but the arrangement is common on many frames, with manufacturers only just beginning to design specifically for Di2. Personally I wish they’d hurry up as a zip tie really isn’t good enough. Brake cables and wiring are internally routed. 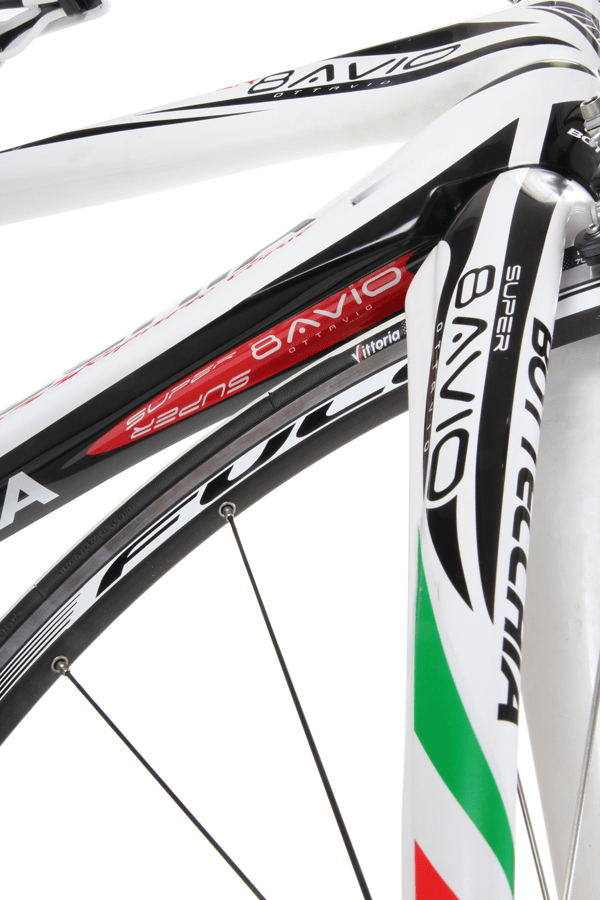 Moving along, the wheels are a pair of Fulcrum Racing 5s in black and white, but with a couple of silver spokes thrown in either side of the tyre valve for a distinctive touch. Taking the front one off to load the bike onto the car revealed they’re not quite as light as my personal Zipp 101s. Claimed weight for the pair is 1,760g though I found them to be slightly more than that. Fulcrum describes the 5 as a durable training wheel for everyday use and I’d agree. They rolled well and stayed true over the month I used the bike, but I wouldn’t be racing on them anytime soon. The tyres are white Vittoria Zaffiro 2s. I have to say I like my tyres black on principle but they performed just fine out on the road. They didn’t stay white for very long though…

The Zero 100 bar and the Corsa Zero 100 stem are both from Deda. Both are colour-matched to the frame and there are plenty of spacers included above the integrated headset providing fine-tuning options for your riding position. The fork, stem and bar combination is noticeably stiffer than other bikes I’ve ridden recently and you can certainly feel the road through them, but the ride wasn’t harsh. In fact, I thought that overall the Bottecchia was very comfortable over longer rides. Bottecchia claims that the seat tube design is intended to combine shock absorption near the top while providing a stiff bottom bracket area and I think that comes across very well in the ride. A matching Deda Superzero seatpost completes the componentry package, with a nicely sculpted seat clamp gripping a white and red San Marco Team saddle. As is common with Italian bikes these days, seatpost, stem and bars are painted to match the frame. 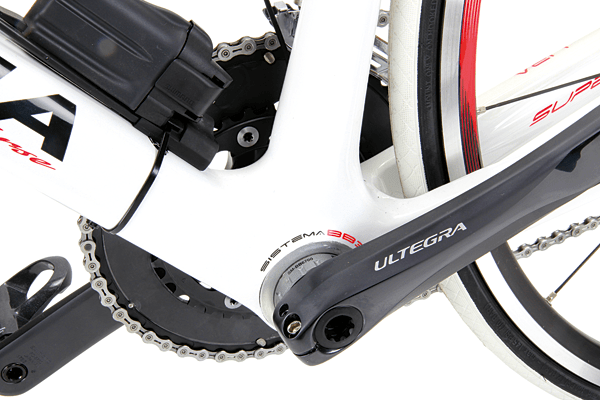 My first week or so with the Bottecchia was overshadowed by the aforementioned front derailleur woes, but once adjusted I rode it on some extended trips up and down the hills of the Illawarra escarpment. Comfort is evident but not at the expense of climbing ability, with that 39/27 gearing coming into its own when crawling up some of the steeper sections such as Bald Hill or The Wall near Otford. Downhill, the Bottecchia inspires confidence, with impressive stability through bends. On the flat it accelerates smartly and with some dedicated race wheels I think it would really fly. As a package, the Super 8Avio has just about everything you’d expect to see on a mid range bike; Ultegra Di2, Deda components and a classy look. About the only thing I wasn’t a fan of on the bike was the handlebar tape. The carbon fibre-look tape wouldn’t be my first choice – I like something a bit softer with a bit of ‘give’. 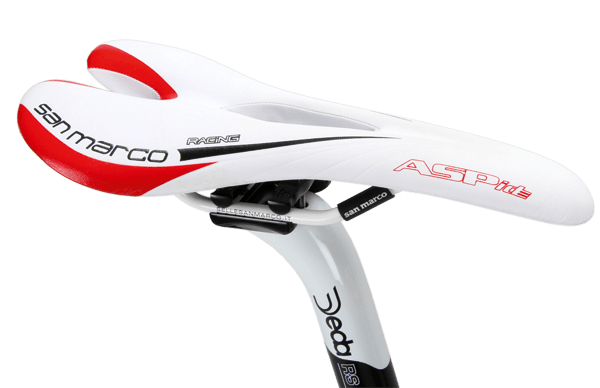 The Bottecchia Super 8Avio is a performance-oriented bike with a nod to comfort for long days in the saddle. As a bonus, the bike is steeped in Italian style and cycling history. It looks bellissimo and, coupled with its relative rarity on the streets and the Di2, the Bottecchia draws curious looks from other cyclists when parked outside the coffee shop. There’s also a Campagnolo option for the whole-hog Italian experience. Given the obvious quality of the frame and the top end components, a quick fling with this Italian beauty could develop into a long-term affair!

Excellent frame and components to match. Attention to detail in the build was generally good though the front derailleur needed re-fitting to get perfect gear changes. This issue would normally be picked up at set-up stage by the bike shop.

This bike is comfortable and fast. Ride it all day straight out of the box or swap the wheels to lose a few grams and it’s a full-on race bike.

At $6,299 the Bottecchia may struggle to compete with more mainstream brands on performance alone. Throw in some Italian style and pedigree and you begin to justify the extra expense. Think Ferrari – but the engine is BYO!

I really enjoyed the Bottecchia. It rides beautifully, turns heads and is that little bit different from the more run-of-the mill bikes out there. If you’re looking for a bike that competes on performance, has the latest gadgetry in the form of Di2, but has that extra something that makes it stand out from the pack, the Bottecchia should be on your shortlist.