Disc brakes, 25mm tyres, capable of winning cobblestone classics, and a 58cm frame that weighs just 7.6 kilos? Trek’s domane 6.9 is a beautifully engineered bicycle. We jumped at the chance to review this black beauty.

Trek bikes have come a long way since their beginning in Milwaukee Wisconsin in 1976. Their bikes were made from steel in that first year out of their base which was once a carpet warehouse. On the back of quality manufacture the company’s sales reached $2M within three years, and since then they have grown rapidly spawning a broad range of evolving bikes for riders of all shapes sizes and disciplines. Notably they have achieved success at the highest levels of road and mountain cycling competition with their Madone, Domane, Fuel and Session models.

The Domane is a race bike with a difference. Not content with settling for slender seat tubes and skinny seat stays to take the sting out of harsh roads, Trek has engineered the Domane frame with a vibration damping pivot they call the Isospeed decoupler at the junction of the seat tube / toptube / seatstays to absorb the road buzz and vibration that will sap your energy over several hours of riding. The result is a frame that is the weapon of choice for Trek’s top pro riders in the one day classics eg Cancellara in Paris Roubaix. Indeed even in the recent Tour Down Under many of the Trek Factory Team riders chose the Domane over their regular race machine, the Madone. 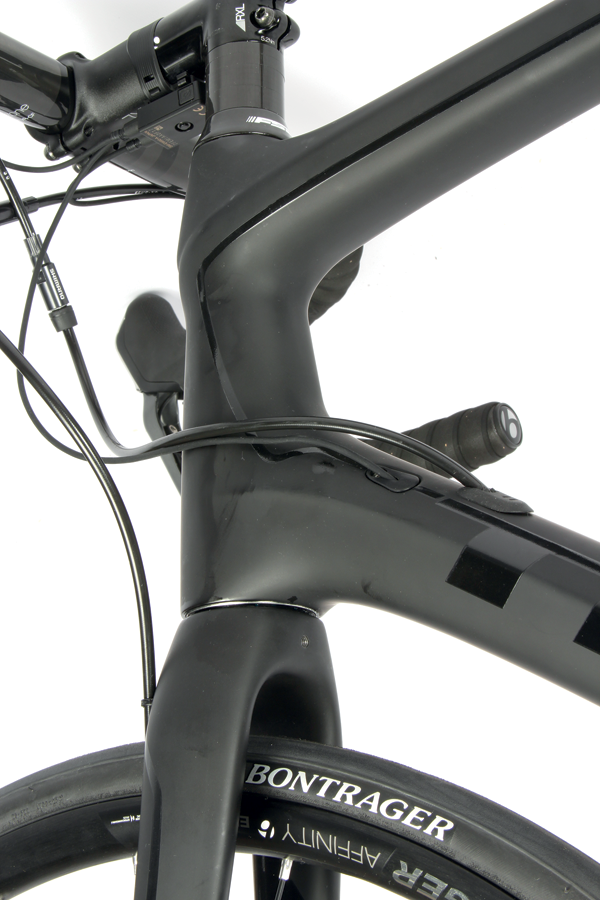 Admittedly these racing units were not sporting disc brakes, and were built with the H1 geometry similar to their Madones, but the country roads around Adelaide, while not all coarse bitumen, were deemed enough to warrant the change— and up to the task of providing maximum speed.

The bike reviewed here is Trek’s top end unit, the 6.9 Disc, fitted with Shimano Dura-Ace Di2 gearing, and hydraulic disc brakes with 160mm rotors which takes this model out of UCI sanctioned competition circles—at least for the time being. The frame comprises 600 series carbon, Trek’s second lightest and stiffest carbon material; second to that used in their top end Madones, but well-matched for purpose on frames designed to cope with roads even as rough as the cobbles of Flanders. The decoupler does a fine job of smoothing rough roads and any potholes you can’t avoid, while the broad bottom end with BB90 maintains great power transfer out of the saddle for efficient sprinting and climbing. 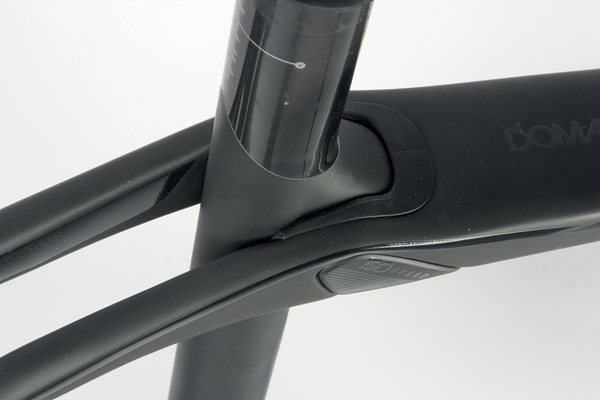 Standard fitout includes the Duotrap cadence and speed sensor, integrated within the left chainstay and ready to pair with your Ant+ head unit. It’s a clean look, enhancing the frame’s aero performance and eliminating the need for zip tying a Garmin sensor to your frame. The frame rolls on Bontrager’s Affinity Elite wheels which are 24 spoked front and rear, 17mm wide internally, 23 externally, and are 21mm deep and so built to take on some tough roads. These alloy clinchers do carry a little extra mass in their spokes and rims and are not as spritely as some, but they are tubeless ready so you can access the extra advantage of no pinch flats quite simply. The rigid 15mm wind up axle on the front and 12mm unit on the rear help keep the bike on the straight and narrow and while the disc rotors add a little weight to the wheels, that extra mass is close to the hub minimising extra rotational forces. The wheels weigh in at a solid but reasonable 898g front and 1040 g on the rear. Bontrager also supplies the rubber and the 25mm R3 tyres (192g) which provided good traction and an appreciable level of suppleness on road. The carbon ‘isozone’ handlebars with their integrated padded inserts also enhance comfort levels and along with the 100mm alloy stem have been chosen from the Bontrager RXL range, clad in matte black to match the rest of the bike. Black on black on black; the overall impression is classy and suitably backed up by faultless performance. I found the ride of the Domane almost serene, definitely well-mannered and while not outright razor sharp in handling, it is stiff and responsive, and imbues supreme confidence on fast descents with its direct steering, class leading braking and traction from the discs and wide rubber. 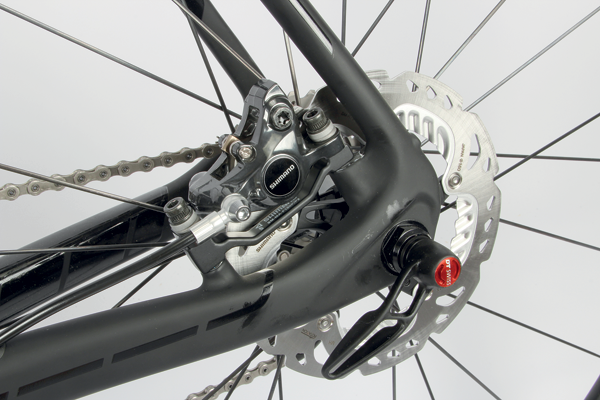 On this 58cm frame, Trek spec a 175mm crank, 100mm stem and 440mm bars. The compact cranks (50:34) and the 11:28 cassette put paid to any hills you’ll encounter and you won’t lose much in top end speed — spinning at 120rpm there’s just 4.1kph difference between 53:11 and 50:11 gearing. Dura-Ace Di2 is a pleasure to use; smooth, silent changes are the norm; it’s a refined system, well matched to the rest of this package. The battery has been relegated to an internal seatpost mount; out of sight and out of mind, and it’s no problem as the charging port for the system is in the tiny junction box hidden under the stem.

During this review period I took the Domane on some long rides and enjoyed it immensely. The Domane does all you ask of it in comfort and style, searing down smooth hotmix highways and traversing rough roads with ease. Twisty descents were a delight given the wide rubber and modulation of the disc brakes, and taming the toughest hills provides great satisfaction. It’s sophisticated and fun at once, a pleasure to ride. 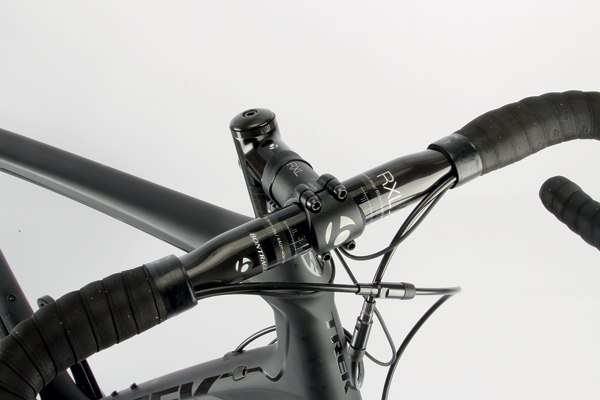 At the top end of Trek’s road range, the Domane 6.9 Disc is a blend of great design, top shelf materials and space age engineering. Adding Dura- Ace Di2 and hydraulic braking complements the package resulting in a bike of the highest quality.

The fact that the Domane is used as a rough pavement alternative for pro racers speaks volumes about its performance capacity. Comfort and efficiency brings speed and minimises elapsed time. I was impressed with the Domane’s capacity to handle fast descents and its willing response uphill.

An exceptional bike fitted with superlative components from Shimano and Bontrager, you would expect the Domane 6.9 Disc to carry a premium price tag, and so it does. The asking price of $9,499 is in the same league as similarly specced bikes from other brands, and the design, quality of finish and performance level goes a long way to justifying it. 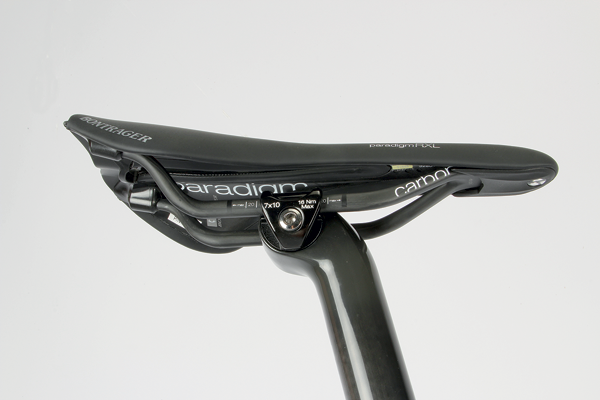 There’s a lot to take in on this bike, from the overall understated aesthetic of the matt black finish, those new age shiny rotors, the muted buzz of electronic shifting. Then there’s the thought behind the Isospeed decoupler and the feeling of that low mass when you first pick it up, and better still, the smooth confident ride and sense of quality that comes through on your first ride. The Trek Domane 6.9 Disc is a trophy bike, a machine that will provide great satisfaction to its owner both in and out of the saddle. 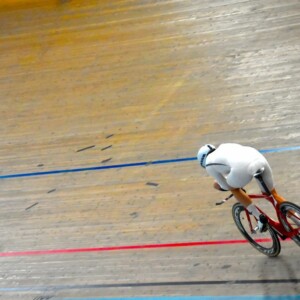 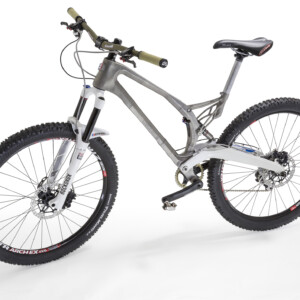